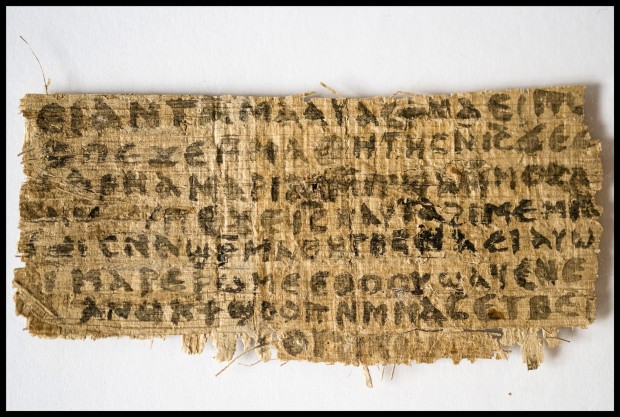 A previously unknown scrap of ancient papyrus written in ancient Coptic is pictured in this undated handout photo. The fourth-century text provides evidence that some early followers of Jesus proposed that he was married, a perception disputed by scholars. (CNS photo/Karen L. King, courtesy Harvard University)

ROME (CNS) — Scholars are unlikely to agree anytime soon on the authenticity of a newly published text containing a reference to Jesus’ “wife.”

But the tiny papyrus fragment, purportedly dating to the fourth century A.D., has already stirred interest in the early church’s attitudes toward marriage, sex and the role of women.

The fragment of papyrus with eight lines of Egyptian Coptic writing is the “only extant ancient text which explicitly portrays Jesus as referring to a wife,” wrote Karen L. King, historian of Christianity at Harvard Divinity School, in an academic paper she delivered Sept. 18 at an international Coptic studies conference in Rome. 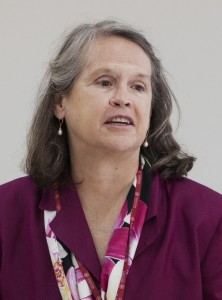 “It does not, however, provide evidence that the historical Jesus was married,” she wrote, “given the late date of the fragment and the probable date of original composition,” at the end of the second century.

The best source of evidence giving an account of Jesus’ life and ministry is still the Gospels in the New Testament, King told reporters the next day, “and they are silent about his marital status.”

But she said the fragment is “direct evidence” that early Christians started debating in the second century whether Jesus could have been married or not.

Father Juan Chapa, a New Testament scholar at the University of Navarra in Spain, told Catholic News Service that the “Gospels don’t mention marriage, not because they wanted to hide something, but because it was clear that Jesus did not get married, and it’s consistent in the church’s tradition.”

He also noted that the gnostic gospel genre to which the fragment evidently belongs is one of stories about Jesus that mainly take place after the resurrection, using language that is heavily allegorical. Thus, he said, the fragment’s relevant words –“Jesus said to them, ‘My wife'” — were likely not meant as a literal assertion about the life of the historical Jesus.

King said that the significance of the fragment lies in the light it might shed on debates in the early church over the necessity of celibacy to living a holy life.

According to Michael Peppard, a professor of theology and Coptic language at Fordham University, a belief in asceticism saw rapid development in the second to fourth centuries, especially in Egypt where Christian monasticism was born.

Some bishops at the time “were saying that the highest ideal was asceticism,” which included renouncing “all the trappings and worries of material life,” including marriage.

But Peppard said other bishops in the same period “were figuring out how to give everyone their space,” and letting it be known it was all right for Christians to live in the world.

The new text published by King may be a sign of early Christians “pushing back” against asceticism and moving closer to mainstream Jewish attitudes “of blessing sex and procreation,” Peppard said.

Catholic teaching, Father Chapa said, holds that “Jesus’ celibacy, by differentiating him from other rabbis, underlines his unique mission to fulfill the kingdom of God, and shows how he embodied the love of God” by renouncing conjugal love.

King said the reference to Jesus’ wife could just be a symbol of the church, akin to the Gospel allegory of Jesus as bridegroom of the church.

“What if what’s missing is saying, ‘My wife is the church?'” King said.

But both Peppard and King argue that the word does refer to a real person, since the line just below it includes the words: “…she will be able to be my disciple…”

The “wife” in question could be a “spiritual wife,” Peppard said. Other texts from the same period uphold “the image of an unconsummated spiritual marriage where the best kind of husband and wife live celibately,” he said.

King acknowledged that there would be continued debate over the authenticity of the fragment, whose paper trail goes back only to the 1980s.

“I would say it’s a forgery,” Alin Suciu, a papyrologist at the University of Hamburg who was attending the conference with King, told the Associated Press. “The script doesn’t look authentic” compared to other fourth-century Coptic papyri.

But Roger Bagnall, a papyrologist and director of the Institute for the Study of the Ancient World at New York University, studied the handwriting, the grammar and how the ink was absorbed by the plant fibers, and concluded it was likely to date from the period between 350 and 400 A.D.

“We can’t ever know or be 100 percent sure if it’s authentic or a forgery,” Peppard said.

King said any properly accredited scholar in the world is welcome to study the papyrus, and that criticism of her findings is part and parcel of any historical study.

“We want to do the best job we can with new historical data,” she said.

Father Chapa called King’s discovery “exciting,” and nothing for believing Catholics to fear.”Anything that helps us understand our past, to understand the history of the church and how the church defined herself in history,” he said, “is very valuable and positive.”

Contributing to this story was Francis X. Rocca in Rome.

PREVIOUS: Vatican synod to examine when divided Christians can preach together