Voters organize around local concerns in this year’s elections 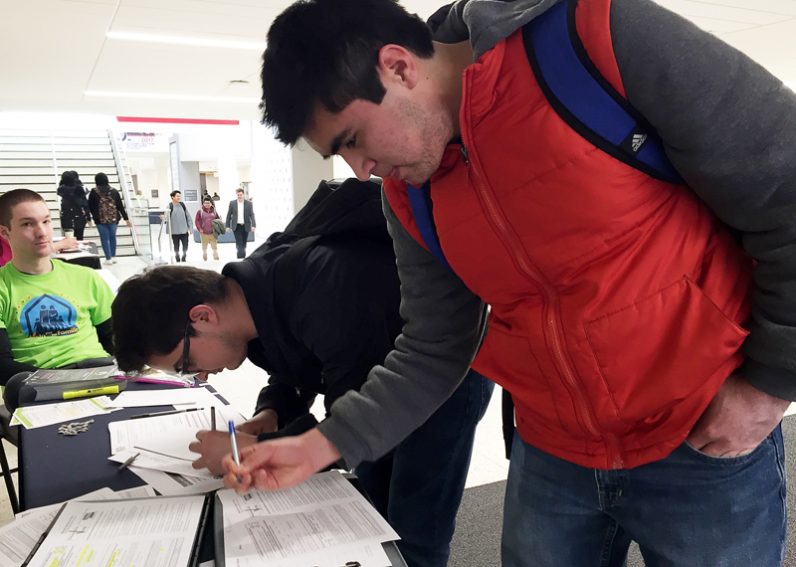 WASHINGTON (CNS) — With widespread interest in this fall’s congressional and state legislative elections, local congregations and grass-roots organizations are moving beyond traditional voter registration campaigns to engage voters in the electoral process.

The efforts are geared toward responding to the challenges that voters say affect the quality of their lives — inadequate public transportation or a low minimum wage, for example — and then, when there’s sufficient interest, working to place a referendum on the ballot.

“Research shows people don’t want to vote against something. With ballot measures, it’s also the conversations in congregations (asking) what kind of country do we want to live in and how their families live,” said Joy Cushman, national campaigns director for Faith in Action, the broad network of congregations formerly known as PICO National Network.

“People will turn out when they have something to vote for,” she told Catholic News Service.

This year among issues — either on the ballot or in the signature-collecting stage — are efforts to cap payday lending interest rates in Colorado, boost the minimum wage in Michigan and Massachusetts and restore voting rights for most Floridians with prior felony convictions after completing their sentence.

Such congregation-based organizing has seen success, as two 2016 votes show.

In both cities, the involvement of faith communities — working phone banks, knocking on doors, engaging in community conversations and turning out the vote — are credited with passage.

Such victories have helped people feel empowered about having a say in something that affects their lives after years of feeling forgotten by public officials, said Charlie Davis, a parishioner at St. Philip Neri Church in Indianapolis and a volunteer with Faith in Indiana, to which the parish belongs.

“One thing I find is really important is engaging the voter with the issues. You have to be quick on the trigger because if you don’t capture their interest on the get-go you’ll lose them quickly,” Davis told CNS.

Activists such as Davis said the key is building relationships, which helps people understand if they work together they can make a difference as voters also begin to examine the stances of candidates for political office.

“As long as they know what the issue is, they’re excited about what’s going to happen and how things impact them,” Davis explained. “My experience is that once they find out what the issues are and know their vote is going to count, especially in a local election, then they’re empowered to vote.”

It’s at the local level that people can more readily realize change and that’s why voter registration and turnout is important, said Eileen Hayes, executive director of Michigan Faith in Action, a Catholic Campaign for Human Development-funded organization based in Flint.

“People see the presidential elections and they don’t always see the impact of a local city council election or a school board election,” Hayes said. “One of the things that helped them do that is helping them realize those candidates are just like us and realizing you could be the next person (in that seat).”

Grass-roots groups, including some funded by CCHD, see the 2018 election cycle as pivotal given the current divisive political climate.

Registration campaigns are increasingly accompanied by broad education and engagement efforts that bring issues to all candidates rather than hosting traditional forums where candidates say what they want to do in office and take a few questions.

Such voter engagement includes widescale community meetings to which candidates are invited and asked their position on issues most important to low-income and working-class voters.

The public assemblies serve as an organizing tool, especially in a year when voter turnout is important, for community-led groups such as Austin Interfaith in Texas.

“We are pitching this as a pivotal year to get involved in the electoral process,” said Carlota Garcia, a member of Our Lady of Guadalupe Parish in Austin, one of dozens of congregations that make up Austin Interfaith. “Yes, that means voter registration, but also interacting with candidates and asking candidates to support legislation that supports our families.”

In some locales, the federal crackdown on people who are in the country illegally and insensitive public comments by elected officials about immigrants are a concern. Potential voters have been angered by what they consider xenophobic, even racist, remarks, said Sergio Sosa, executive director of the Heartland Workers Center in Omaha, Nebraska, a CCHD-funded organization.

“The political climate is one of the frustrations. It demands that people should engage in public life, not just voting, but also civic engagement,” Sosa said. “You build anger among people, that can help turn them into voting.”

Heartland staff and volunteers have spent plenty of energy and resources on voter registration in recent years. Sosa said that of its Latino clients, staff discovered that only 14 people voted in 2012. During the 2014 Congressional election the number of voters rose to 136. The number climbed to more than 600 in 2016.

Sosa said an effort is being made to get even more people registered to vote and turn out at the polls this year.

“The United States is changing dramatically in demographic terms,” he explained. “But numbers do not mean anything if (voters) are not organized. Numbers don’t mean anything if they don’t exercise their right to vote.”

Catholic clergy whose parishes are involved in such coalitions said the work is rooted in Catholic social teaching and falls in line with U.S. Conference of Catholic Bishops guidelines.

Father Misael Avila, pastor of St. Francis of Rome Parish in Riverbank, California, one of 120 congregations throughout the San Joaquin Valley belonging to Faith in the Valley, finds political engagement crucial to the lives of Catholics. The parish is one of several congregations registering voters before the state’s June 8 primary election and was to host one of 10 candidates’ forums May 1.

“We’re doing this voter registration drive because it is the duty of Catholics to vote,” he told CNS. “We’re not going to tell them how to vote, but it is a duty.”

“There is great dignity in work when people feel they are giving back to society,” Father Wadelton said. “It’s about the dignity of the person so they have the same rights as all. And the dignity of being able to live well.

“So all of this work, whether it’s for incarceration, mental health treatment or immigration, it all comes out of the belief in our basic dignity of people.”