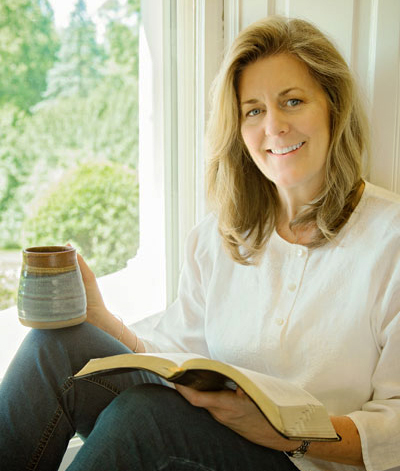 “I feel like I had coffee with them,” she said recently from her home in Paoli, “spending time chatting and learning from them how you can trust God when things are going on in your life. I can relate to those feelings of having to wait forever and not getting any answers.”

“It’s fun to get to know them,” said Christmyer, “to hang out with them and really explore who they are because they were real people. We tend to forget that. Their problems and situations, even though it’s a different culture, (are) not that different from the things we face today.”

Christianity has long been a part of Christmyer’s life, though she was raised in the Protestant faith. “I have a huge family, and they’re all missionaries and pastors. They’re very, very involved in their faith (in) full-time mission work.”

Christmyer’s husband Mark had been raised Catholic but left the Catholic faith when he was in college. While they were dating, he started to practice faith again in the Protestant church.

“We were eventually married,” she said, “and when I became pregnant, all those Catholic roots started coming back. He wanted to baptize the baby Catholic and he wanted to go to a Catholic church. I was really thrown for a loop by that because that was not in the plan. If I had known that, I wouldn’t have married him. I was very strong in the tradition I was raised in. I had no reason to leave it. So, it was very upsetting and distressing.”

This led to several years of asking questions, she said, and she had a hard time finding answers.  “A lot of Catholics I knew at the time couldn’t understand my questions or gave me answers I couldn’t understand. It was a very lonely, difficult time,” she said.

Christmyer joined an RCIA program “to prove to my husband why we couldn’t be Catholic,” she said. But the opposite happened. It was during prayer she heard the Lord say to her, “’Sarah, why are you here?’ And I realized that God was implying that he brought me there, which was the exact opposite of what I thought had happened.

That story leads to one of the main questions asked in her book. “He said to me, ‘I’m going this way. Are you coming?’ And I actually saw him extend his hand out to me as he said that. And so, I asked that question in ‘Becoming Women of the Word’ because as I go through the women of the Old Testament, these are some of the first people in the world who God reached out to and asked to follow him.

“How do you know you can trust God if you don’t know him?” Christmyer asked. “God revealed himself to them in their situations, which are very much like situations we find ourselves in — loneliness, anxiety, our world falling apart, pain. He met people in their situations, and they followed him in faith. Their stories show us what can happen when we follow God in faith.”

Christmyer sees her conversion to the Catholic faith as about “not following my parents’ coattails but deciding to follow God for myself — growing into a newer practice of my own faith, stepping out in trust of him. So, my conversion story is very central to the theme of what my book is about.”

For six years, Christmyer has been teaching Scripture as an adjunct faculty member at St. Charles Borromeo Seminary, where she earned her Master of Arts degree in theology in 2017.  The course is based on the “Great Adventure Bible Timeline Program,” which Christmyer co-authored with biblical scholar Jeff Cavins.

“We follow the basic flow of those biblical periods,” Christmyer said. “We focus a lot on a general level to get the narrative of Scripture, and how the Old Testament and New Testament fit together, how one reflects the other, and how it fits into our Catholic practices, the liturgy and sacraments. My hope is to get them to fall in love with God in the Scripture.”

Christmyer, who in addition to speaking at conferences also maintains her blog Come Into the Word, hopes the seminarians in her classes will bring a love of Scripture into their homilies someday, and that it will strengthen them in their faith.

“It gives me so much hope to see such wonderful young men who are studying to be priests in our archdiocese,” she said. “There are some fantastic young men in the program. The first class that I taught just became priests this year, and it fills me with hope for the future of the church. To just have a little part in their formation is a great honor.”