Carmelite brother embraces homelessness to minister to people on streets 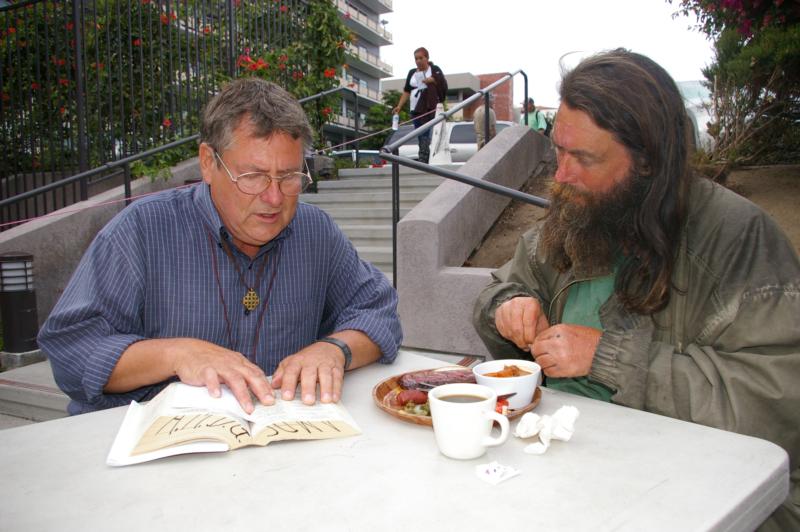 Brother Michael Ignatius reflects on a scriptural passage with Billy, a homeless friend, at a soup kitchen in downtown San Diego May 14. Brother Michael, a postulant with the Carmelite Order, voluntarily embraced homelessness to better minister to the homeless community. (CNS photo/Denis Grasska, The Southern Cross) S

SAN DIEGO (CNS) — From just looking at Brother Michael Ignatius, one wouldn’t suspect it. But the 61-year-old Carmelite is homeless.

For several months, his bed was a bench on a bike path near San Diego International Airport. Later, he discovered that he could get a few hours of sleep every night by taking a round trip on the San Diego Trolley’s Green Line.

And there have been times when he was so hungry that he scrounged for food in dumpsters. Experience taught him that those in the Point Loma area were the best, because they often contained fresh seafood.

Brother Michael, a postulant with the Carmelite Order, voluntarily has embraced homelessness as part of a one-man ministry to those living on the streets.

“Honestly, I really don’t know why I’m doing it, except for I get so much joy from doing it,” he told The Southern Cross, newspaper of the Diocese of San Diego.

Last summer, he was working at a soup kitchen in Denver, when he felt called to serve the homeless in a more radical way. In conversation with his spiritual director, he realized what this would require.

Widowed nine years ago after almost 29 years of marriage, and with his four children already grown to adulthood, there was nothing to hold him back. He gave away essentially everything he owned.

Last June, he boarded a bus to Los Angeles with his few remaining possessions, a handful of items that included a Bible, a breviary, a backpack, three changes of clothes, a sleeping bag and a blanket. After a trek north to Santa Monica, he embarked on a six-week journey by foot to San Diego, arriving there in early August.

Along the way, Brother Michael relied entirely on God’s providence — and his trust was constantly rewarded. He recalled occasions when strangers or newfound acquaintances gave him money without his even asking; once, praying for food after going three days without it, he found a coconut lying in the beach sand and a bag of limes that had washed up on shore.

“This is the way God has been this entire journey of mine,” he said. “Anytime there was a need, it was provided.”

His is “an evolving ministry.” At the outset, there was no fixed plan but, by being open to God and the opportunities that he has presented, the ministry took shape.

During the day, Brother Michael encounters people of all sorts, including young adults discerning what to do with their lives, older people who envy his freedom, Christian street preachers with whom he shares his Catholic beliefs, and, of course, the homeless themselves.

For him, engaging in ministry can be as simple as spotting a homeless person on the street and striking up a conversation. Sometimes, his interlocutor will ask if he can spare a few bucks.

“I don’t have any money, but I do have a passage for you from Scripture,” he will tell them, pulling out his Bible, reading a few verses, encouraging them to reflect on the meaning of those divinely inspired words and concluding by asking if he can pray for their salvation.

Sometimes, at fast-food restaurants, he will pick up discarded receipts that include a “Buy one, get one free” coupon. By offering to share that second meal with a fellow homeless person, he has found yet another way to start conversations.

Through his personal appearance, Brother Michael hopes to come across as the sort of person to whom others would feel comfortable talking. A cross and a scapular are the only telltale signs that he is a religious brother.

But, while he tries to blend in with his homeless brothers and sisters, he draws the line at growing unruly facial hair, looking dirty or wearing unclean clothes. He has made an effort to find those public places where he is able to shower regularly.

“I try never to look soiled, or beaten, or worn,” he said.

Brother Michael tries to help homeless people connect with services that are available to them but that they may be unaware of, such as a soup kitchen or government program. Through relationships he has established with Christian pastors and churches of various denominations, he tries to connect the homeless with organizations that will nourish their souls too.

His own spiritual routine includes praying the Divine Office and trying to attend Mass daily. He spends an average of three hours a day in prayer, and he hopes to take vows as a novice this coming October.

In late April, Brother Michael joined the staff of the homeless ministry God’s Extended Hand, which has provided him with a room for the night. His duties as head cook for breakfast are typically fulfilled by 1 p.m., freeing him to hit the streets and conduct his ministry.

Having had a good night’s sleep in a bed, rather than on a bench or a trolley car, also means that he is able to approach that ministry with more energy.

Brother Michael, whose father would invite homeless men into their home to join them at the dinner table, has always had a heart for the downtrodden. He stresses the importance of truly immersing oneself in the lives of those on the streets.