‘Faith’ at core of growth of law firm that helps immigrants, says founder 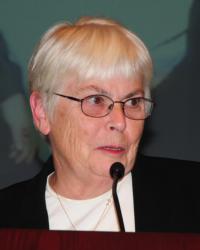 Sister Ann Durst, a member of the Society of the Holy Child Jesus, is pictured in an undated photo.  (CNS photo/courtesy Casa Cornelia Law Center)

WASHINGTON (CNS) — Jesus says in the Gospel of Matthew that the kingdom of heaven is like a mustard seed: It begins as “the smallest of all seeds, yet when full-grown it is the largest of plants. It becomes a large bush, and the birds of the sky come and dwell in its branches.”

When Sister Ann Durst started a pro bono law firm for immigrants in the ’90s, it was probably the smallest of all law offices in San Diego: She ran it out of a condo and had an operating budget of only $75,000 a year.

Now, Casa Cornelia sits in a well-appointed office on San Diego’s Fifth Avenue, represents hundreds of unaccompanied children, asylum applicants and victims of trafficking every year, enlists the volunteer services of countless private attorneys, and last year had an operating budget of over $2 million. It is the largest pro bono immigration law firm in San Diego County.

So what allowed Casa Cornelia to blossom into the wellspring of hope it has become? Sister Durst has one answer: Faith.

“We are blessed that the people supported us” through the many changes the firm has gone through over the years, she said, chalking up its continued success to prayer and generosity.

In a phone interview with Catholic News Service Feb. 12, Sister Durst revealed that her passion for helping immigrants began while she was studying to become a lawyer, saying: “I went to Georgetown law school and took an immigration course. … It was interesting because of the human dimension.”

So when her order, the Society of the Holy Child Jesus, requested that she survey the American Southwest to explore opportunities for service in the area, she was already sure that her goal would be to “(provide) legal services to the immigrant community in some way.” In 1992, the law firm that would become Casa Cornelia became a reality.

For a while, the lawyers at the firm made it on a shoestring budget, representing people primarily from Central American political turmoil where they could. But with a change in immigration law in 1996 that allowed immigrants married to U.S. citizens who were physically abused by their spouse to apply for visas, it was clear that the fledgling firm would have to grow.

At the time, Sister Durst reported, “we were one of the few organizations providing services to immigrants” and an expansion was needed if immigrant women were to “exercise their rights under the new law.”

Luckily, support and donations poured in from her order and from the public, and Sister Durst and her companions were able to upgrade their operation. “All of our services continued to be provided free of charge” she added.

Since that buildout, Casa Cornelia has developed three main branches: one dealing with unaccompanied children, another dealing with those trying to apply for asylum, and one for victims of crime and trafficking.

Recently, Sister Durst reports that she has seen the numbers of unaccompanied minors “(start) to double,” but more of them have legitimate asylum claims and thus have greater hope with the help of Casa Cornelia’s services.

But even if the asylum claims end up falling through, Casa Cornelia tries to “see to it that (unaccompanied minors) are returned home in a safe environment…not under the force of a deportation order.”

In the past year, her firm has helped 147 children who are applying for asylum. This is part of over 1,000 asylum-seekers that the firm has responded to in 2018; among them, these asylum-seekers speak over 40 languages. Add to that over 500 victims of serious crimes, including domestic violence and human trafficking, in pursuit of special humanitarian visas, and Casa Cornelia is busy at all times.

“(The) staff can’t handle” those numbers all by themselves, Sister Durst related, “so we have a program that recruits attorneys from the private bar” to help out with the cases. The firm’s nine staff attorneys dedicate a significant amount of time to mentoring the volunteers.

The attorneys and staff of Casa Cornelia have to deal with some pretty harrowing situations every day that involve their clients — gang violence, sexual abuse, hostile governments — but every victory the organization is able to score makes the struggle worth it, according to Sister Durst.

“Bright moments are when you win!” she exclaimed. “when someone’s green card comes in the mail (or) when an attorney comes back to say that they have won asylum.”

And the massive support San Diego gives Casa Cornelia is a constant source of encouragement and resources.

Sister Durst noted that “the faith community (and) the business community” of San Diego have “stepped up” to the increased immigration in recent years. Additionally, in light of the family separations that took place under the Trump administration, “there’s been a lot of interest with foundations” in sponsoring the worthy work of Casa Cornelia.

According to her, “The spirit of justice and compassion is hitting folks.”

NEXT: Catholic organizations scrutinize what works best in fighting poverty