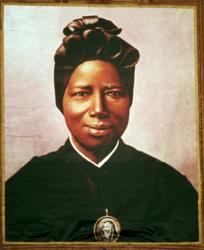 VATICAN CITY (CNS) — The International Day of Prayer and Awareness Against Human Trafficking invites people to host or attend a prayer service that fosters awareness of and support for victims of trafficking.

The annual day, created with Pope Francis’ encouragement in 2015, is celebrated Feb. 8 — the feast day of St. Josephine Bakhita, who was kidnapped as a child and sold into slavery in Sudan and Italy.

Once she was freed, she became a Canossian sister and dedicated her life to sharing her testament of deliverance from slavery and comforting the poor and suffering. She was declared a saint in 2000 and Pope Francis has called her “an exemplary witness of hope for the many victims of slavery” today.

A prayer offered by Pope Francis in 2018 reads:

“St. Josephine Bakhita, you were sold into slavery as a child and endured untold hardship and suffering. Once liberated from your physical enslavement, you found true redemption in your encounter with Christ and his church.

“O St. Bakhita, assist all those who are trapped in a state of slavery; intercede with God on their behalf so that they will be released from their chains of captivity. Those whom man enslaves, let God set free.

“Provide comfort to survivors of slavery and let them look to you as an example of hope and faith. Help all survivors find healing from their wounds.

“We ask for your prayers and intercessions for those enslaved among us.

NEXT: ‘Faith’ at core of growth of law firm that helps immigrants, says founder