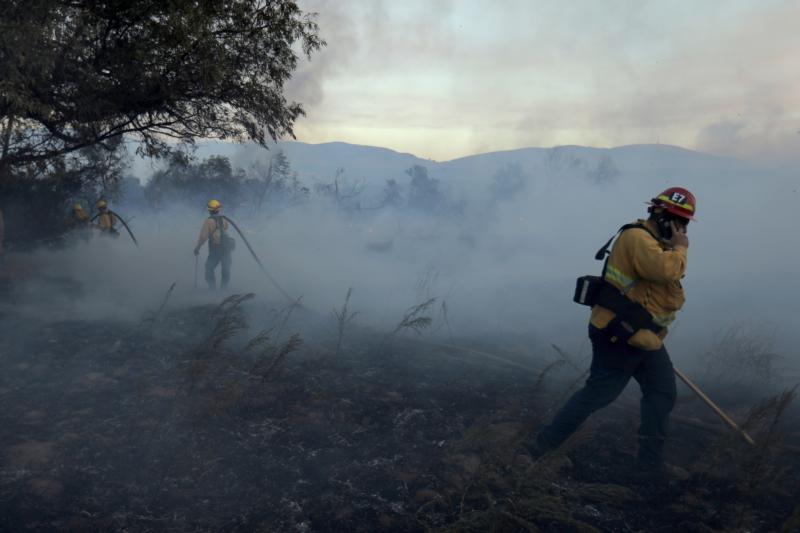 Firefighters work to put out hot spots in a fast moving wildfire Oct. 9, 2017, in Orange, Calif. The California Catholic Conference commemorated the fourth anniversary of Pope Francis’ encyclical “Laudato Si’, on Care for Our Common Home” by issuing a pastoral statement calling for heightened attention to ecological issues in the state that could affect future generations. (CNS photo/Mike Blake, Reuters)

WASHINGTON (CNS) — The California Catholic Conference commemorated the fourth anniversary of Pope Francis’ encyclical “Laudato Si’, on Care for Our Common Home” by issuing a pastoral statement calling for heightened attention to ecological issues in the state that could affect future generations.

The document from the conference, which includes all of California’s bishops, focused on the encyclical’s theme of integral ecology to demonstrate that the environmental protection of the state is ingrained in a spirituality that unites all of creation in praising God.

The pastoral statement emphasizes two goals: “To animate and energize the implementation in California of what Laudato Si’ calls us to do and to offer a dynamic teaching and evangelization tool for our Catholic faith community and beyond, especially for young people.”

The bishops encouraged Californians to work in solidarity and consider approaches that faithfully and efficiently care for the state’s environment. They said the pope’s encyclical shows that ecological spirituality is not limited to simply cultivating the environment.

“To live out integral ecology with joy and authenticity, we are called to recognize the interrelated character of our existence — its environmental, economic, social, and cultural dimensions — and to practice care for all that God has created,” said the document, titled “God Calls Us All to Care for Our Common Home.”

The first part of the pastoral statement includes a reflection on the “beauty and bounty” of California, the decline in access to water, increased air pollution and how creation symbolizes a family that should be protected at all costs.

California’s natural ecosystems and water systems are being affected because droughts are becoming more common and more intense, causing rainfall to be inconsistent, the bishops said.

The statement also recalled that in 2012 California became the first state to acknowledge that access to safe, clean and affordable water is a universal and basic right. The bishops expressed concern that, despite the measure, thousands of rural Californians are unable to access clean drinking water from their taps.

A common thread among the prevalent environmental issues facing the state is that poor people are most affected, leading to social justice concerns, the document said, adding that elected officials and policymakers must develop policies that ease such burdens on the poor.

The bishops’ document cites the Catholic social teaching principle of subsidiarity, which grants freedom to develop the capabilities present at every level of society, while also demanding a greater sense of responsibility for the common good from those who hold greater power.

The second portion of the pastoral statement prompts Californians to acknowledge their “ecological vocations” and to act upon them with faith and gratitude in order to achieve integral ecology.

Such a vocation, the bishops said, involves many paths and includes not only a career choice, or a means of earning a living, but also a means of encountering an overall ecological conversion as individuals, families, and communities. Those who work and advocate for environmental justice embody and live out their ecological vocations to the fullest, they said.

The pastoral statement concludes with a prayer, “Caring for California,” that expresses gratitude for the state’s beauty and asks for the grace to experience an ecological conversion while undertaking new efforts to shape a more inclusive society and protect Earth.

NEXT: Mom says miracle in Sheen cause that saved her son a gift to whole church