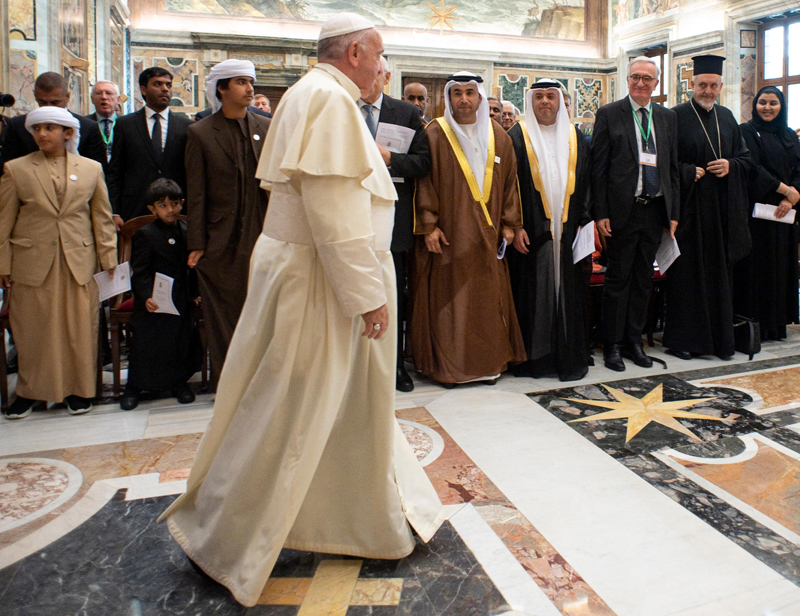 Pope Francis arrives Nov. 14 for an audience at the Vatican with participants in an international conference on protecting children and preventing their exploitation online. (CNS photo/Vatican Media)

VATICAN CITY (CNS) — While digital technologies have led to advancements in communication and education, they also have led to the exploitation of children on the internet, Pope Francis said.

The “spread of images of abuse or the exploitation of minors is increasing exponentially, involving ever more serious and violent forms of abuse and ever younger children,” the pope told participants at a two-day conference sponsored by the Pontifical Academy for Social Sciences.

“The challenge before us,” he told them Nov. 14, “is to ensure that minors have safe access to these technologies, while at the same time ensuring their healthy and serene development and protecting them from unacceptable criminal violence or grave harm to the integrity of their body and spirit.”

The Nov. 14-15 conference, titled “Promoting Digital Child Dignity — From Concept to Action,” brought together religious leaders, academics, policymakers and tech industry leaders from around the world to discuss ways to combat the exploitation of children online.

According to the pontifical academy’s website, the event was “a follow-up of the process that began with a joint commitment for the protection of children during the Child Dignity in the Digital World meeting in 2017.”

Speaking to journalists at the Vatican press office Nov. 11, Jesuit Father Federico Lombardi, president of the board of directors of the Joseph Ratzinger-Benedict XVI Foundation and board member of the Child Dignity Alliance, said the purpose of the meeting was to discuss and develop “concrete solutions and initiatives” to protecting children online.

Among the issues discussed were ways to restrict access using age verification in order “to protect children from this invasion. Parents find it difficult to confront this issue,” Father Lombardi said.

Current studies, he said, indicate that “the median age in which children begin to have experiences of encountering pornography on the internet is 11 years old,” and the median age is continuing to decrease.

“I know that this is a concern that parents have and rightly so,” Father Lombardi said.

In his address, the pope said the church “senses the duty to approach these issues with a long-term vision,” especially as the church continues to confront the clerical sexual abuse crisis.

“In recent decades, from painful and tragic experience, the Catholic Church has become profoundly aware of the gravity and effects of the sexual abuse of minors, the suffering it causes and the urgent need to heal wounds, combat such crimes and establish effective means of prevention,” the pope said.

Child exploitation on the web, he continued, is due in part to “the dramatic growth of pornography,” which is “the fruit of a general loss of the sense of human dignity; frequently it is linked to human trafficking.”

Additionally, he acknowledged the tension that exists between the idea of the digital world as “a realm of unlimited freedom of expression and communication” and the “need for responsible use of technologies and consequently a recognition of their limits.”

“The potential of digital technology is enormous, yet the possible negative impact of its abuse in the area of human trafficking, the planning of terrorist activities, the spread of hatred and extremism, the manipulation of information and — we must emphasize — in the area of child abuse, is equally significant,” the pope said.

Although parents have the primary responsibility for raising their children, he said, it is becoming increasingly difficult to “control their children’s use of electronic devices.”

“Man’s creativity and intelligence are astonishing, but they must be positively directed to the integral good of the person from birth and throughout life,” the pope said. “Every educator and every parent is well aware of this and needs to be helped and supported in this task by the shared commitment born of a new alliance between all institutions and centers of education.”