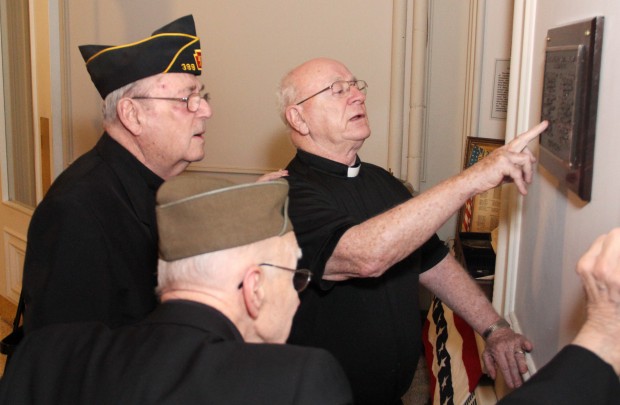 Fr. Robert Breen, Fr. Sidney Burgoyne, and Fr. Joseph McCloskey read the plaque at St. Charles Seminary that memorializes six chaplains who lost their lives while serving in World War II. The six chaplains were honored during ceremonies at St. Charles Borromeo Seminary on Dec. 7, the 71st anniversary of the bombing of Pearl Harbor. (Photos by Sarah Webb)

Call it a premonition or maybe just a fitting epitaph. “Courage is fear that has said its prayers and there is no greater prayer than squaring souls away for God.”

That was written in the last letter to his family by Father Anthony Conway, chaplain in the U.S. Marines and a priest of Philadelphia, ordained May 22, 1937, and who died on a Guam beach July 23, 1944.

Father Conway was one of the six archdiocesan priests who died while in service during World War II and were honored during ceremonies at St. Charles Borromeo Seminary on Dec. 7, the 71st anniversary of the bombing of Pearl Harbor.

In all there are 70 Catholic chaplains listed on a monument in Arlington National Cemetery for having given their lives during World War II. That six should be from a single diocese is remarkable. More astonishing is that there were 78 Philadelphia diocesan priests in service during that period, which places their mortality rate almost three times as high as the military service as a whole.

“It was an extraordinary commitment on the part of the priests of the Archdiocese and it reflected the commitment of the whole country at the time,” commented Bishop Timothy C. Senior, the rector of St. Charles Seminary.  “I remember reading in a seminary history that after Pearl Harbor priests went down to the chancery on 18th Street and started to line up to volunteer. They were young priests and priests who had served in World War I.”

Before evening vespers on the Pearl Harbor anniversary Bishop Senior formally blessed a plaque adjacent to the seminary’s Immaculate Conception Chapel that memorializes the six chaplains.

Joining with the seminary community for the dedication were several retired priests who also served their country at various times.

Father Sidney Burgoyne was an infantry soldier who went over to Europe just before the Battle of the Bulge in 1944 and saw service in France, Germany and Austria.

“Perhaps it affected my vocation,” he said. “I saw the transience of life; the shortness of life. I think that affected me.”

“What greater love does a man have than to lay down his life for his country?” he said. “They made the supreme sacrifice.”

Father Robert Breen was formally not in the service during the war, but that really is a technicality.

He was in the Merchant Marine ferrying war material to Europe, when especially in the early days of the war the ships were easy prey for the German submarine wolf packs. “We had higher casualties than any branch of the service,” he said. “They didn’t recognize us for years.”

Msgr. David Benz has the distinction of military service both as a layman and a priest. “I was enlisted for the Vietnam conflict,” he said. “After that God hit me on the head and I entered the seminary.” Not long after ordination he went back as a chaplain with service in various parts of the world.

He was happy to see the six chaplains honored but added, “Any death is sad. That is a risk we all had to experience. All of these men gave their lives in total service. We are appreciative of service to God and country.” 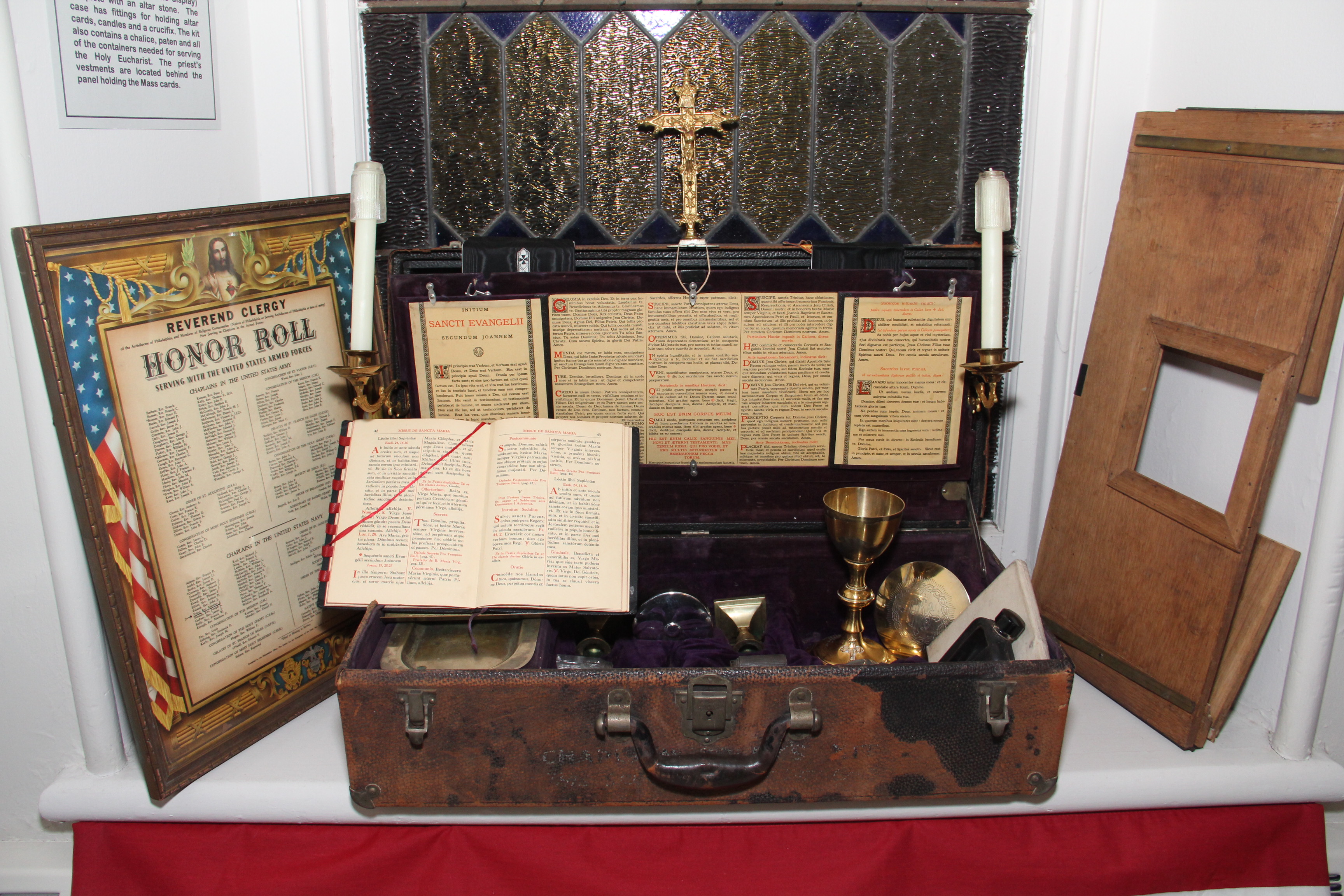