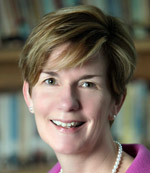 Anne McGoldrick, former chief financial officer of Independence Mission Schools, has been named president of the independent Catholic school system in the Philadelphia region. In the role she will be responsible for the operational leadership of IMS.

Former IMS president Aldo Cavalli will serve the IMS Board of Trustees as special adviser for strategic initiatives.

The network of 15 Catholic elementary schools was founded in January 2013 as a new model for Catholic education. It serves approximately 4,500 children of all faiths from many of the city’s most under-resourced neighborhoods. In two years IMS has seen growth in enrollment, scholarships and philanthropic funding, as well as advancement in the number of academic programs.

“IMS is extraordinarily fortunate to have such talent in its executive team,” said Brian McElwee, chairman of the board. “Al and Anne have built IMS into a strong and viable model of quality education in Philadelphia, and I look forward to ongoing growth of the organization with this change.”

Cavalli has more than 35 years of experience as an administrator in the education and mental health fields and has served as president of IMS since its inception in 2013.

McGoldrick has served as CFO of IMS since the organization’s founding. Previously she worked as an executive in finance and operations for several firms. As the CFO for IMS, she formulated many key initiatives including the development of an innovative financial model for the schools and an expanded financial aid infrastructure.

“I am committed to the important mission of IMS,” McGoldrick said. “I look forward to continuing my work with the talented management team and the leaders of our 15 schools. We will build upon the significant momentum that we have gained in our endeavors and continue to provide our students with a strong, supporting infrastructure for academic success.”