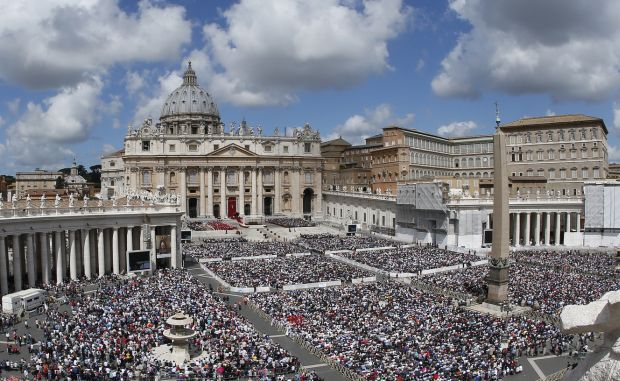 Pope Francis celebrates Mass on the feast of Pentecost in St. Peter's Square at the Vatican May 19. (CNS photo/Paul Haring) (May 20, 2013)

VATICAN CITY (CNS) — The power of the Holy Spirit transforms people into bold witnesses of the Gospel, who reach out to others, exercise charity and live in harmony with creation, Pope Francis said.

Celebrating Pentecost Mass in St. Peter’s Basilica and reciting the “Regina Coeli” prayer with tens of thousands of people gathered in St. Peter’s Square May 24, the pope spoke of Pentecost as the day the church was born universal but united.

When the Spirit came upon the disciples, Pope Francis told people in the square, “they were completely transformed: fear was replaced by courage, closure gave way to proclamation and every doubt was driven away by faith full of love.”

The day’s first reading, Acts 2:1-11, recounts how people from every land heard the disciples speaking in their own languages, the pope said. “The church was not born isolated, it was born universal — one, catholic — with a precise identity, but open to all.”

The good news of salvation proclaimed by the disciples was meant for the whole world, he said.

“Mother church does not close the door in anyone’s face,” he said. “Not even the biggest sinner’s.”

The tongue of fire resting on the head of each disciple as a sign of the Holy Spirit was “the flame of love that burns away all harshness; it was the language of the Gospel that crosses every border humans make and touches the hearts of the multitude without distinction of language, race or nationality.”

Today, just as on Pentecost, the pope said, the Holy Spirit is poured out on the church and on every follower of Jesus “so that we would leave behind our mediocrity and being closed off, and rather communicate to the whole world the merciful love of the Lord.” 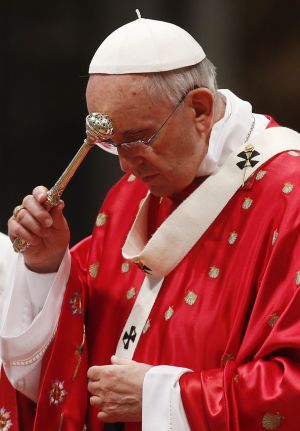 Pope Francis blesses himself with holy water as he celebrates Pentecost Mass in St. Peter’s Basilica at the Vatican May 24. (CNS photo/Paul Haring)

Pope Francis urged Christians to model their lives on the two people beatified May 23: Archbishop Oscar Romero of San Salvador and Italian Consolata Sister Irene Stefani, who worked and died in Kenya.

Referring to Blessed Romero as a “zealous pastor,” Pope Francis said that “following Jesus’ example, he chose to be in the midst of his people, especially the poor and oppressed, even at the cost of his life.”

“May the heroic example of these blessed ones give rise in each of us to the deep desire to witness to the Gospel with courage and self-sacrifice.”

In his homily at the Pentecost Mass that morning, Pope Francis said the Scriptures assure Christians that the Holy Spirit continues to be at work in the church and in the world doing what Jesus promised the Spirit would do: “he guides us into all the truth, he renews the face of the earth, and he gives us his fruits.”

Filled with the Holy Spirit, the disciples went from being confused about Jesus’ death and afraid to speak and afraid of being arrested, to being bold announcers of salvation in Jesus, the pope said.

The Spirit made them understand that “the death of Jesus was not his defeat, but rather the ultimate expression of God’s love, a love that, in the resurrection, conquers death and exalts Jesus as the living one, the Lord, the redeemer of mankind, the Lord of history and of the world.”

At the same time, the pope said, the Spirit is the one who renews the earth and can renew people’s relationship with it.

“The Holy Spirit whom Christ sent from the Father, and the creator Spirit who gives life to all things, are one and the same,” he said. “Respect for creation, then, is a requirement of our faith: the ‘garden’ in which we live is not entrusted to us to be exploited, but rather to be cultivated and tended with respect.”

If people allow themselves to be renewed by the spirit, he said, “we will indeed be able to experience the freedom of sons and daughters in harmony with all creation.”

God sent the Holy Spirit “so that we may live lives of genuine faith and active charity, that we may sow the seeds of reconciliation and peace.”

The Spirit cannot be forced on anyone, the pope said. But “closing oneself off from the Holy Spirit means not only a lack of freedom, it is a sin.”

“There are many ways one can close oneself off to the Holy Spirit: by selfishness for one’s own gain; by rigid legalism — seen in the attitude of the doctors of the law whom Jesus referred to as hypocrites; by neglect of what Jesus taught; by living the Christian life not as service to others but in the pursuit of personal interests; and in so many other ways.”

PREVIOUS: Pope: Clinging to wealth robs people of hope, lures them away from God