Language of love keeps family close, half a world apart 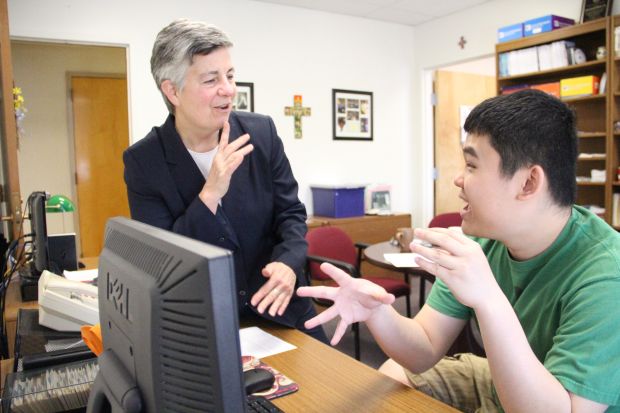 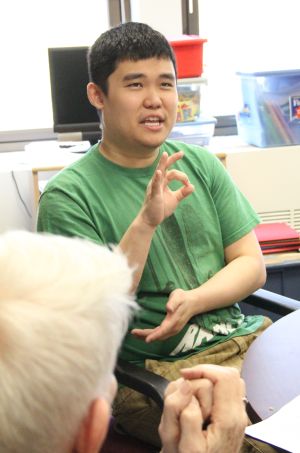 Jordan Sanjaya talks about his recent graduation from Philadelphia Community college, and his plans for the future at Temple University, May 7 in the archdiocesan Office for Persons with Disabilities and the Deaf Apostolate. (Sarah Webb)

What constitutes that extra mile parents will go when one of their children faces a special challenge? Jordan Sanjaya, who just graduated with honors from Community College of Philadelphia, can tell you it may be a great distance indeed. His parents, Hilda and Jimmy Sanjaya, came 10,112 miles to be precise.

When their eldest child Jordan lost his hearing at age 2 they were determined to provide him with the best education for as normal a life as possible. They were Christians in an overwhelmingly Muslim country and the nearest Christian school for the deaf was a Catholic school 12 hours away, an impossible distance.

They did what millions of people have done over the centuries. They sold everything they had, in their case a small clothing store, and in 2001 they came to America with Jordan who was then 8 years old.

The difference was in past generations you just came over with few questions asked. Now there is the matter of getting a work visa or a permanent visa. The Sanjayas only had a tourist visa, but they overstayed because they were desperate for the sake of Jordan.

A first stop was in South Philadelphia and St. Thomas of Aquinas Parish, where Jordan was enrolled in the parish school.

But it really isn’t equipped for deaf children and after two weeks, they were put in touch with Archbishop Ryan School for Children with Hearing Impairment, which at that time was located at St. Gabriel’s, Norwood.

Jordan remembers how nervous he was, but surprised too, because it was the very first time he saw deaf children communicating in a real language, American Sign Language (ASL), not just by gestures.

He thought he would never be able to do it, but was surprised how easy it was to pick up, much easier than learning English.

Time passed. Eleven years ago another son, Joshua, was added to the little family. Then in 2010 the immigration agents came knocking. Jimmy was deported back to Indonesia, but Hilda, Jordan and Joshua were left alone, at least for now.

Joshua of course has automatic citizenship because he was born here, but Hilda and Jordan do not, although Jordan qualifies under DACA (Deferred Action for Childhood Arrivals) guidelines and the hope of the entire family is eventual citizenship.

Jordan did well in his studies at Ryan and after grade seven he transferred to the Pennsylvania School for the Deaf, which has a high school program.

Meanwhile, he became active in various programs offered by the deaf apostolate of the Archdiocese of Philadelphia, and although his family was of the Baptist tradition, he asked his mother for permission to become Catholic, which she readily granted.

“He was going to Catholic Church, so I said if that’s what you want you can do it,” Hilda said.

“I found my Christian faith was stronger and more connected through the Catholic Church, so I became Catholic to keep that relationship,” Jordan said.

In high school and his early years of college at Community College of Philadelphia he was very involved in the deaf apostolate, as a counselor at the former Camp Neumann, as a lector and altar server in church and working part time in the archdiocesan Office for Persons with Disabilities and the Deaf Apostolate, alongside Immaculate Heart Sister Kathleen Schipani.

“I help plan events for teens and young adults in the deaf apostolate,” Jordan said.

Because of his excellent grades at the Pennsylvania School for the Deaf and his community involvement in the deaf apostolate he was awarded a full college scholarship, which he intended to pursue at Temple University. However, because of his undocumented status, without a social security number, Temple would not take him at that time, but Community College of Philadelphia was more than willing to do so.

“My experience at Community College was wonderful,” said Jordan, who graduated May 2 with an associate’s degree in computer science.  “College has its ups and downs but overall it was great. I had wonderful interpreters assigned to help me.”

Community College of Philadelphia is equally proud of Jordan where he was an honors student, and he was especially singled out for recognition at the college’s graduation ceremony.

Now he has been accepted by Temple for his final two years for his bachelor’s degree, and hopes to continue on to a master’s degree in business.

“My ambition is to develop a dictionary for STEM (Science, Technology Engineering and Math) that relates to Sign,” Jordan said. “In college it hasn’t been easy because new words in STEM have not been translated into Sign Language yet and it is a struggle. A STEM vocabulary in Sign would make it easier for the deaf community.”

Someday, Jordan hopes he and his family will all be united as American citizens. Wherever his future lies, he knows faith and family are the foundation for anything he accomplishes.

“Faith helps to give me internal strength and keeps our family together,” he said. “Without faith we are lost. It helps me to have hope and be positive of what the future will bring. I always know with God’s help I can find my path through life.

“My mother sacrificed for me, and so did my father,” he said. “I love her very much, she has always been there for me and my brother. She works very hard to provide us with our home and our food.”

Every day before they leave for their separate tasks, Jordan and Joshua ask their mother to pray for them and give them her blessing. Some mornings, thanks to the wonders of Skype, Jimmy, 12 hours and 10,000 miles away in Indonesia, joins them in prayer. God bless the family. 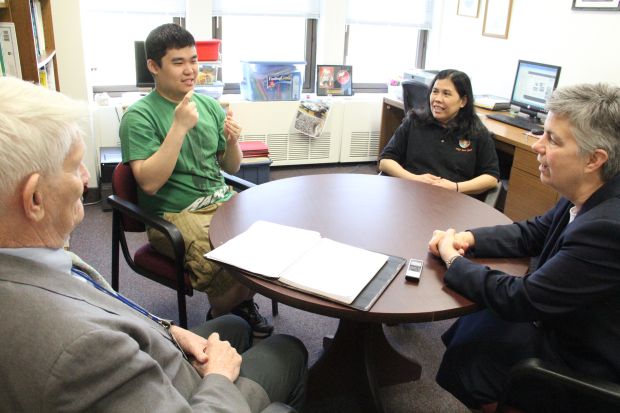 PREVIOUS: A leap worth taking: Deacon recalls journey to priesthood

NEXT: Devotion to Mary leads to consecration, and now to priesthood