Pope says he left U.S. praying for, impressed by its people 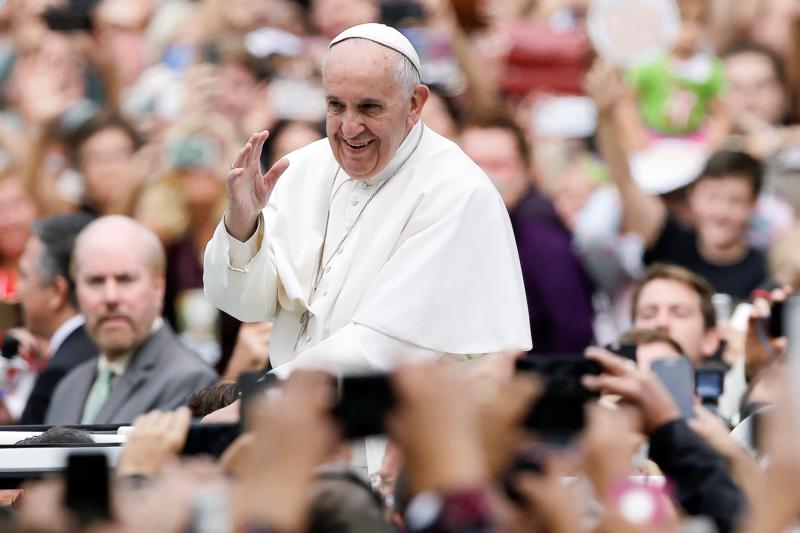 Pope Francis waves to the crowd as he makes his way to celebrate the closing Mass of the World Meeting of Families in Philadelphia Sept. 27. (CNS photo/Matt Rourke, pool)

BOARD THE PAPAL FLIGHT FROM PHILADELPHIA (CNS) — As the American Airlines plane taking him to Rome from Philadelphia took off, Pope Francis said he pictured the faces of all the people he met, and he prayed for them.

(Read the text of Pope Francis’ remarks at airport here.)

At the end of his first-ever visit to the United States, the pope told reporters he “was surprised by the warmth of the people” and how they were “so loving. It was beautiful.”

Spending close to 50 minutes with members of the media flying back to Rome with him Sept. 27, the pope said he also was struck by the sincere piety of people at his Masses and prayer services.

Shortly after takeoff, Pope Francis responded to a dozen questions, including why he spoke with such compassion to U.S. bishops in Washington about what they went through in the aftermath of the clerical sex abuse crisis.

“I felt a need to express compassion because what happened was horrible, and many of them suffered a lot,” the pope said. For “men of prayer, good pastors” the crisis was truly a “tribulation.”

Sexual abuse occurs in families, schools and other environments, he said, but when the abuser is a priest it is “a kind of sacrilege,” because a priest’s job is to help a person grow in love of God and, instead, an abusive priest “squashes” his victims.

An abusive priest “has betrayed his vocation, the call of the Lord, and those who covered these things up is also guilty; even some bishops covered this up. It was a horrible thing. And my words of comfort were not to say, ‘well, be tranquil, it was nothing,’ — no, no, not that. But it was such a bad time that I imagine they wept a lot.”

Pope Francis said he understands survivors who feel they cannot forgive their abusers and those who have lost their faith in God because of it.

On another topic, a U.S. reporter referred to the Kentucky county clerk, Kim Davis, who refused to issue a marriage license to a gay couple because of her religious beliefs. The reporter asked Pope Francis to comment on the discussions in the United States regarding religious liberty and its possible limits

Pope Francis said he had no idea of the specific case, but he insisted that “conscientious objection is a right — it is a human right.” If some rights can be denied in certain circumstances, he said, then it would turn into a situation where people were determining some human rights were more important than others.

When asked further about the county clerk, the pope said since the official was a human being then that official should enjoy the full range of human rights, including the right to follow her conscience.

Asked about the role of women in the church, Pope Francis said not ordaining women does not mean the church does not recognize how essential they are to its life and ministry, which is one of the reasons he highlighted the contributions of consecrated women.

“I felt like I needed to thank them for what they have done,” he said.

Asked if the success of his visit to the United States made him feel powerful or like a star, he said power is not his ambition: “It is something that passes. You have it today, but tomorrow it’s gone.”

For those who follow Jesus, he said, the only power that counts is the power to serve others. “True power is service … humble service, and I still need to make progress on this path of service because I feel like I am not doing all that I need to do.”

After participating in the World Meeting of Families in Philadelphia and looking ahead to the opening Oct. 4 of the Synod of Bishops on the family, Pope Francis was asked about his decision to streamline the process for declaring the nullity of marriages.

He insisted the change was strictly juridical and not doctrinal. It is not “Catholic divorce,” he said. The annulment process needed reform because with automatic appeals “there were processes that lasted 10-15 years.”

The annulment process does not dissolve a marriage, but rather investigates whether or not a valid sacramental marriage was present from the beginning, he said.

The decision to issue the new rules for the process responds to a request made by the majority of bishops at the extraordinary Synod of Bishops on the family last year, he said.

The question of finding some sort of process or “penitential path” to readmit to the sacraments Catholics who have remarried without an annulment is something still on the synod’s agenda, he said. “It seems a bit simplistic to me to say they can receive Communion,” but it is an issue that needs further discussion.

Another issue touched upon during his U.S. visit was migration. Pope Francis had told the U.S. Congress, “Our world is facing a refugee crisis of a magnitude not seen since the Second World War.”

On the plane he told reporters that the world cannot pretend the crisis currently impacting Europe sprang up overnight. He said it was provoked by years of war and tensions in the Middle East and by decades of hunger and tensions in Africa, a continent that continues to be exploited by the world’s rich nations when some investment would create jobs and help people live dignified lives in their homelands.

As for the idea of some European nations to start building walls or fences to keep migrants out, Pope Francis said the influx of newcomers needs to be handled intelligently, “but walls are not the solution.”

Erecting walls, he said, “the problems remain and they remain with increased hatred.”

Pushed to comment on his popularity, Pope Francis insisted he doesn’t feel like a “star” because of all the crowds that flocked to meet him. Besides, he said, stars tend to come and go.

Asked about the primary task facing the church in the United States, the pope said, “The challenge of the church is to be what it always was — close to the people, not detached,” he said.

PREVIOUS: Memory and motion: Pope Francis shows Americans who he really is

NEXT: Text of Pope Francis’ remarks at airport departure