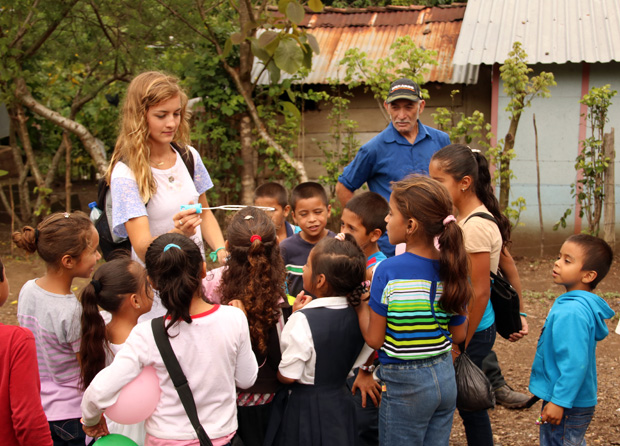 Anneliese Sawick, a young parishioner from the Archdiocese of Philadelphia, shows Nicaraguan children how to have fun with soap bubbles during a recent trip of a dozen Philadelphians visiting residents of villages established by Father Chuck's Challenge.

Pope Francis almost certainly never heard of Father Chuck’s Challenge back in 2014 when during his Lenten Message he said, “We Christians are called to confront the poverty of our brothers and sisters, to touch it, to make it our own, and to take practical steps to alleviate it.”

Now as Philadelphia reflects on the recent World Meeting of Families and the visit of Pope Francis to the city, with his twin messages of support for healthy families and the obligation of those who are more fortunate to assist those who are less fortunate, Msgr. Schmidt quotes Pope Francis’ 2014 Lenten Message as a reflection of what Father Chuck’s Challenge has been doing for the past eight years.

Thanks to the organization’s fundraising more than 1,000 families in the poorest countries in the Western Hemisphere have been provided with sturdy little homes that they now own free and clear.

A group of more than a dozen men and women from the Philadelphia area recently visited Nicaragua to dedicate the 1,000th family home financed by Father Chuck’s Challenge.

“The elderly man hugged each and every one of our group at Mass at Siempre Viva. He really wanted to show his gratitude,” said group member Jane Vacca, a member of St. Maria Goretti Parish in Hatfield. “Then we saw him near his own home and he came over to the car, again thanking us, saying that before his roof was plastic and the rain came in and now he is dry. His gratitude was really touching.”

The man’s home and others are located in St. John Paul II Village, one of a number of such villages created through Father Chuck’s Challenge in the rugged highlands of Nicaragua.

Andrew Callan of Exton, at 16 the youngest member of the visiting group, was accompanying his grandfather Lawrence O’Malley of Lansdale.

“Not everyone can see how many people in the world are suffering,” said Callan, a junior at Bishop Shanahan High School. “I want to serve them in any way I can.”

It all began in 2007 when Msgr. Schmidt, a former director for youth ministry for the Philadelphia Archdiocese, was casting about for a way to memorialize Father Charles Pfeffer, one of his successors in youth work   who died suddenly in 2004 at the age of 52.

He wasn’t interested in starting a movement, just raising a bit of money to do something good in memory of Father Chuck.

Another priest told him about Food for the Poor, which is the largest outreach program in the country with a special focus on assistance to Central America. Among other things they construct houses for families who for the most part are living as squatters in tumbledown shacks.

In Nicaragua, the second poorest country in the Western Hemisphere, FFP works very closely with the American Nicaragua Foundation.

Msgr. Schmidt, who was retired, thought he could raise enough money, perhaps $30,000, to give to FFP to build a few houses in Father Chuck’s memory.

One thing led to another and now eight years and almost $5 million later, with the addition of some matching funds from FCC and the ANF, there are 1,017 cheerfully painted, single-floor concrete homes with corrugated metal roofing.

They are clustered in 16 villages in Nicaragua and two fishing villages in Haiti, the West’s poorest country.

Typically the houses are about 400 square feet divided into two or three rooms; a common area and one or two bedrooms. Cooking is done outdoors and each house has clean running water in most cases piped directly to the house, plus a garden area and an outdoor latrine.

If practical there is also electric wiring, although some of the remote areas have no electric service. In one fishing village in Haiti the solution was to supply each family with solar panels to give them a modest amount of electricity.

The chickens are especially important in such countries where chicken is the staple meat when families can afford it. At Corpus Christi Village, one of the first ventures, the families were given two chickens and a rooster in 2013. Now one family’s flock has expanded to 14 chickens and eight chicks and one rooster. “We eat the roosters because we only need one,” the father explained.

The chickens, of course, are a source of eggs which are eaten by the family and also sold to supplement its income.

At Father Pfeffer’s Village, also among the first villages constructed, each family owns a small patch of land but other land is held in common and on it the villagers have developed a bean project.

The sale of beans, after some have been used by families, has been so profitable that plans are to use the money to purchase more land and expand the project.

While Christian charity not Catholic evangelization is the central thrust of the program, which serves everyone in need regardless of faith, there is bit of gentle evangelization involved.

Kathy John and her husband Rhys was down from St. Helena Parish in Blue Bell visiting one of the new houses at Siempre Viva Village and distributed small gifts, including a Bible.

“A little while later I was passing the door and peeked in,” Kathy said. “A young girl was sitting on the floor intently reading the Bible.”

Father Chuck’s Challenge is still going strong and although Msgr. Schmidt is still actively involved, he and his assistant Connie Hunt have stepped down from leadership. The reins have been turned over to Father Charles Kennedy, assisted by Theresa Gilmore. Both were among the June visitors to Nicaragua.

Much of the money raised has come through Msgr. Schmidt and now Father Kennedy, speaking at Sunday Masses in various parishes mostly in the Philadelphia suburbs. Many of the villages visited have names reflecting the Spanish equivalent of those suburban parish names where funds were raised.

To give a sense of the level of poverty in Nicaragua, Father Kennedy recalls visiting a family where the income for the husband was the equivalent of $3 a day working at a coffee plantation. They received a new house several years ago.

Actually if they were applying today they would have been denied, because the demand is so great now the poverty level for eligibility is $2 a day, he explained.

Although Father Chuck’s Challenge by itself cannot radically alter the poverty in the world at large, it is a shining example of what ordinary people, religious or otherwise, can do in their own quiet way. Pope Francis would be proud. 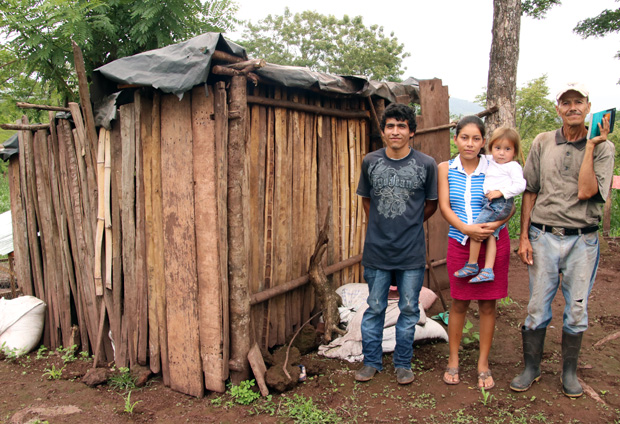 Hazzel Orozco Ortiz, center, holds her daughter and stands with her family beside their home, which is typical in the highlands of Nicaragua. Father Chuck’s Challenge provides sturdier concrete block structures and other items farming families may need.

PREVIOUS: Many prayers and dollars help Francis Fund ‘undo the knots of poverty’

NEXT: World Meeting was big, but was it the biggest event in Philadelphia history?