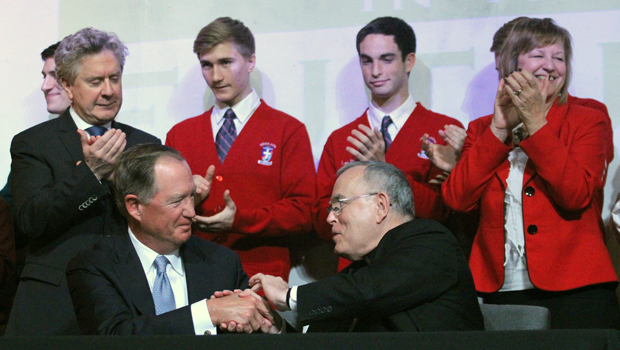 When Faith in the Future Foundation assumed operational control of the Archdiocese of Philadelphia’s 17 high schools and four schools of special education in 2012 under an agreement with the Office of Catholic Education, the school system was losing money.

Today, instead of a cumulative annual deficit there is a surplus, according to the foundation’s chief executive officer, Samuel Casey Carter. And after years of sharp declines in enrollment in the high schools, the drop is leveling off, with signs of new growth sprouting up.

The backstory of healthier finances and rosier enrollments set the tone for an event at Archbishop Ryan High School in Philadelphia on Feb. 4 at which Archbishop Charles Chaput and Edward Hanway, board chairman of Faith in the Future Foundation, signed an agreement to extend the relationship between the foundation and the archdiocese for six more years, through 2022.

“Extending the management agreement between the Archdiocese of Philadelphia and Faith in the Future Foundation underscores the importance of lay leadership in the Church,” said Archbishop Chaput. “I’m deeply grateful for the willingness of lay leaders — all of whom love Catholic education and its value for the wider public — to step up and support our students in such generous ways.

“The foundation’s zeal for excellence in management, guided by a strong Catholic identity, has served our high schools and schools of special education exceptionally well. I’m confident the foundation will continue to strengthen our educational system for the benefit of the region’s children.”

The foundation’s main role is to raise funds and provide expertise in support of Catholic schools. That includes not only the archdiocesan high schools and special education schools, which the archdiocese still owns, but the Catholic elementary schools as well, through OCE’s services.

The annual financial report on the foundation’s activities shows that more than $14 million has been raised between April 2012 and June 2015. About half of the amount has been invested and the rest applied toward rebuilding the Catholic school system.

That process is three-fold, as stated in foundation literature: fund any operational deficits of the school system; reinvest surplus funds to drive enrollment growth and new educational programs; and provide marketing strategies to increase enrollment.

Carter, the foundation’s CEO, said seven of the 17 high schools were running a deficit in 2012 – their expenses to run the schools and provide tuition assistance exceeded their revenue, 80 percent of which came from tuition received.

Now only three schools are running deficits, but the system as a whole is in the black.

Some of this surplus money is reinvested in the fund, he added, while most is applied to reinvestments in “people, programs and technology,” he said.

He cited three examples of the “new centralized services” offered by the archdiocesan schools office, supported by Faith in the Future.

First, a new Office of Enrollment Management was established in OCE specifically for system-wide enrollment initiatives. Nick Regina is the deputy secretary leading that office.

Second, an information system gathered data not only on potential high school students from Catholic parochial and regional feeder schools, but also on children in public and charter schools. That market analysis helps Regina’s team learn where all potential students are, to efficiently “market the quality of our schools,” Carter said.

Third, that technology strategy led by top administrators encourages financial support from sources such as BLOCS (), the Maguire Foundation and others to provide tuition assistance to families choosing Catholic schools.

The leveling off of decline is one positive sign for foundation officials. Another is a reversal from previous years in which underclassmen – representing the future for a school’s enrollment – were outnumbered by upperclassmen.

Now, there are more freshmen enrolled system-wide than sophomores, more sophomores than juniors, and more juniors than seniors.

While the overall enrollment numbers suggest to Carter the need for more hard work, he sees the strength in underclassmen registration as a signal for future success of the foundation’s efforts. 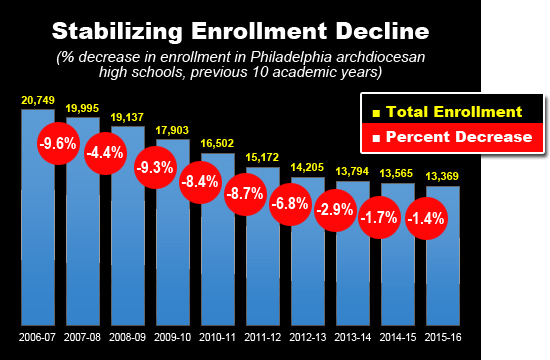 (CatholicPhilly.com graphic by Barbara Hagan; data from Faith in the Future Foundation and Office of Catholic Education)

NEXT: Parishes in South Phila. and Delco begin planning process