A Google map image shows the property at Broad and Ellsworth Streets in South Philadelphia intended to be developed for senior housing by archdiocesan Catholic Health Care Services and the National Shrine of St. Rita of Cascia.

While still very much in the planning stages, the intent is to build a facility that will house the Cascia Center on the ground floor with apartments for seniors on the upper floors. The apartments will be for income-eligible seniors, similar to facilities already developed by the Archdiocese of Philadelphia’s Catholic Health Care Services at St. John Neumann Place in South Philadelphia, Nativity B.V.M. Senior Housing in Port Richmond and soon to be opened St. Francis Villa in Kensington.

As is anticipated for those at the Cascia Center, all were built through the use of government tax credits for low-income seniors.

The Shrine of St. Rita has been a place for pilgrimage for devout Catholics virtually from the time of the parish foundation early in the 20th century and it was officially given the designation National Shrine of St. Rita of Cascia in 2000, according to Augustinian Father Joseph Genito, the shrine’s director. 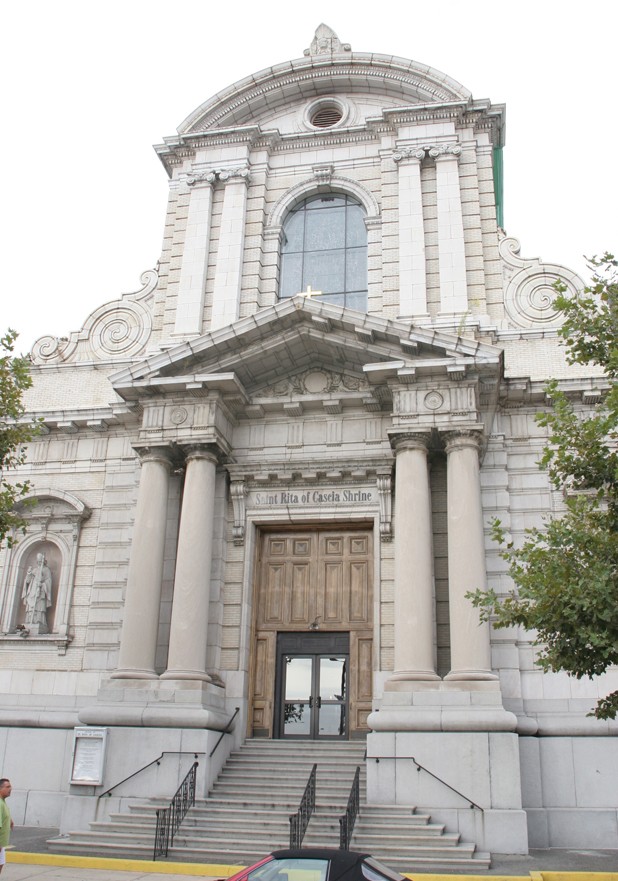 While the shrine worship space beneath St. Rita Church was magnificently renovated in the 1990s, especially through the work of local artist Anthony Visco, the challenge is providing adequate facilities for all of the ancillary activities connected with the shrine.

Toward this end the national shrine acquired surrounding properties from the parish and elsewhere to build a structure that could fill the need.

Initial architectural plans for a new shrine center met critical opposition for being too utilitarian for a prominent site on a rejuvenated South Broad Street.

It was in light of this that Catholic Health Care Services and the St. Rita Shrine came together to propose a much more impressive multi-story structure that would fill the needs of both. For that end Cecil Baker Partners, an architectural firm with wide experience in government, educational and institutional structures as well as the private sector, was selected as lead architects for the building.

“We are fulfilling our mission by building safe, quality, affordable housing for seniors,” said John Wagner, deputy secretary and chief executive officer for Catholic Health Care Services. “We think it is a project that sends a message to the community that the Church remains there and people who are like-minded want to do something to take care of our seniors in that area.”

The project also “allows the shrine to carry on its mission as well,” Wagner said.

Interestingly the site, which had many uses over the years including a school and convent, more recently was the home of the St. Rita’s Senior Center. That was conducted by Catholic Social Services of the Archdiocese of Philadelphia, which was replaced by nearby St. Charles Senior Center. Now it will in part revert to service to senior citizens in a new form.

The Cascia Center itself will provide the shrine with meeting spaces for large gatherings for pilgrimages, workshops, days of reflection, office space, and rooms for counseling and reconciliation, Father Genito explained.

Also something that has been lacking is a kitchen capable of preparing lunches for visiting groups. At this time the shrine must refer visitors to a local restaurant.

There are of course still hurdles to be overcome before it all becomes a reality. But then, that’s St. Rita of Cascia’s specialty – overcoming challenges. Say a prayer.

NEXT: Glenside students take charity from the class to the community