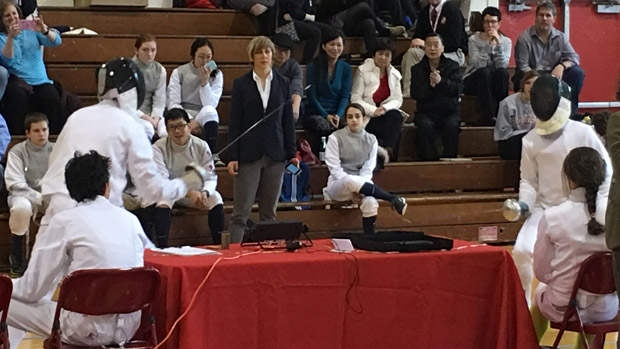 A member of the Archbishop Carroll High School fencing team competes in a match against The Hill School, contributing to the Patriots' first team win this season. 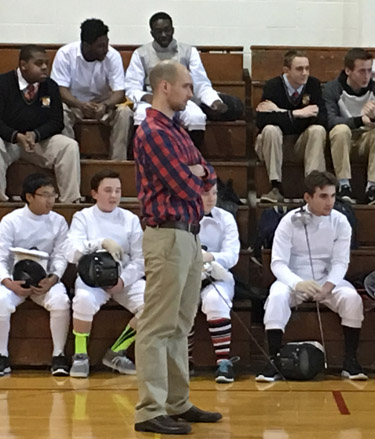 For most people, fencing is a niche sport they watch during the Summer Olympics every four years.

But for Brandon Lafving, fencing is a passion, something he is working to cultivate in the young men and women on Archbishop John Carroll High School’s fencing team, which is now in its second season. The team recently celebrated its first victory, 10-8, over The Hill School in Pottstown.

“There were a few things contributing to our win,” Lafving said. “The team came together, and everyone fenced really well. I couldn’t be prouder of them. Zach Zheng, a sophomore from China, won all three of his bouts.”

By day, Lafving is a ghostwriter and web copywriter who owns his own firm, Brandon D. Lafving Writing Services. His entry into the world of fencing began in middle school, when he read fantasy novels.

“I really thought the sport was a total, comprehensive measure of being a competitor, because it’s an individual sport,” he said. “Everything you do — strategy, tactics, execution — it’s all on you.”

Growing up in Dallas, Texas, Lafving qualified for the Junior Olympics national tournament as an eighth grader. He continued to develop as a fencer, competing at St. Mark’s School of Texas. Lafving became nationally ranked, competing around the world in Europe and North Africa, eventually attracting the attention of the Princeton fencing program, where he competed into his sophomore year before a chronic knee problem ended his collegiate career.

When Lafving moved to Philadelphia, he volunteered for the University of Pennsylvania fencing program. A chance meeting with Carroll president Frank Fox led to a conversation about fencing, and the Patriots fencing program was born.

Now in their second season, the Carroll fencing team has 10 members (a full team would be comprised of 12 men and 12 women). The team practices for two hours at a time, three times a week. Conditioning is key, according to Lafving.

“Cardio is huge,” he noted. “We start every practice by running and doing agility drills. Flexibility is really important. You have to stay loose and relaxed; the more flexible your legs, the longer your lunges. At the same time, we develop reaction time. The ability to make split-second tactical decisions under stress is so important in fencing. You have to be able to act — with your body and brain and heart, all at the same time.”

Lafving said being in shape is crucial to fencers because many of the muscle groups the athletes use are very precise and don’t usually receive a lot of attention. “Think about trying to have the precision of handwriting but with a yard-long piece of steel, while performing improvised dance on a balance beam. It takes some getting used to,” he added.

The Patriots have competed in New Jersey, which is a fencing hotbed. Some schools have as many as 50 to 60 fencers on their team.

“It’s really cool to see,” Lafving said. “I’ve been floored by the talent at Carroll. We have some fencers with great potential. Everybody is really picking it up so well. Our win is testament to how much everyone has learned. The kids love it, and I love teaching it to them. They make the program, and they have won my respect and dedication.”