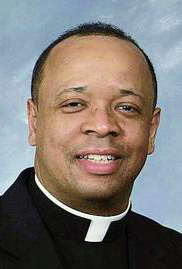 Father Stephen D. Thorne, one of four black Catholic priests of the Philadelphia Archdiocese, will receive the Gesu Spirit Medal May 5 in recognition of his commitment to empowering and mentoring children who live in North Philadelphia.

The medal honors individuals who have shown extraordinary commitment to Gesu School, through their loyal advocacy and actions, and who have made a significant contribution to the school’s success as a model inner-city elementary school.

“Father Thorne is truly deserving of Gesu’s Spirit Medal,” said Bryan Carter, president and CEO of Gesu School. “It is imperative that our boys have a positive role model in their life to encourage them to strive for a better future, and Father Thorne is able to provide that. His mentoring program has made an immeasurable impact upon the lives of our students.”

Born and raised in North Philadelphia, Father Thorne has been a member of Gesu School’s board of directors since 2010. He formalized a mentoring program called Boys to Men that builds upon Gesu’s single-gender classroom instruction, designed to prevent students – especially boys – from losing interest in school.

Each week Father Thorne dedicates his time to teaching life skills to eighth-grade boys, including learning how to tie a tie, developing a resume, and making good decisions. He also recruits African-American men to speak with the boys and share their stories as an extension of his mentorship program.

Pastor of St. Martin de Porres Parish since 2011, Father Thorne is also a role model for young African-American men who may be considering a vocation to the priesthood.

The Spirit Medal is presented yearly at the Gesu Gala, the school’s annual fundraiser, which supports the school’s mission to empower North Philadelphia’s children to break the cycle of poverty and violence through a quality education.