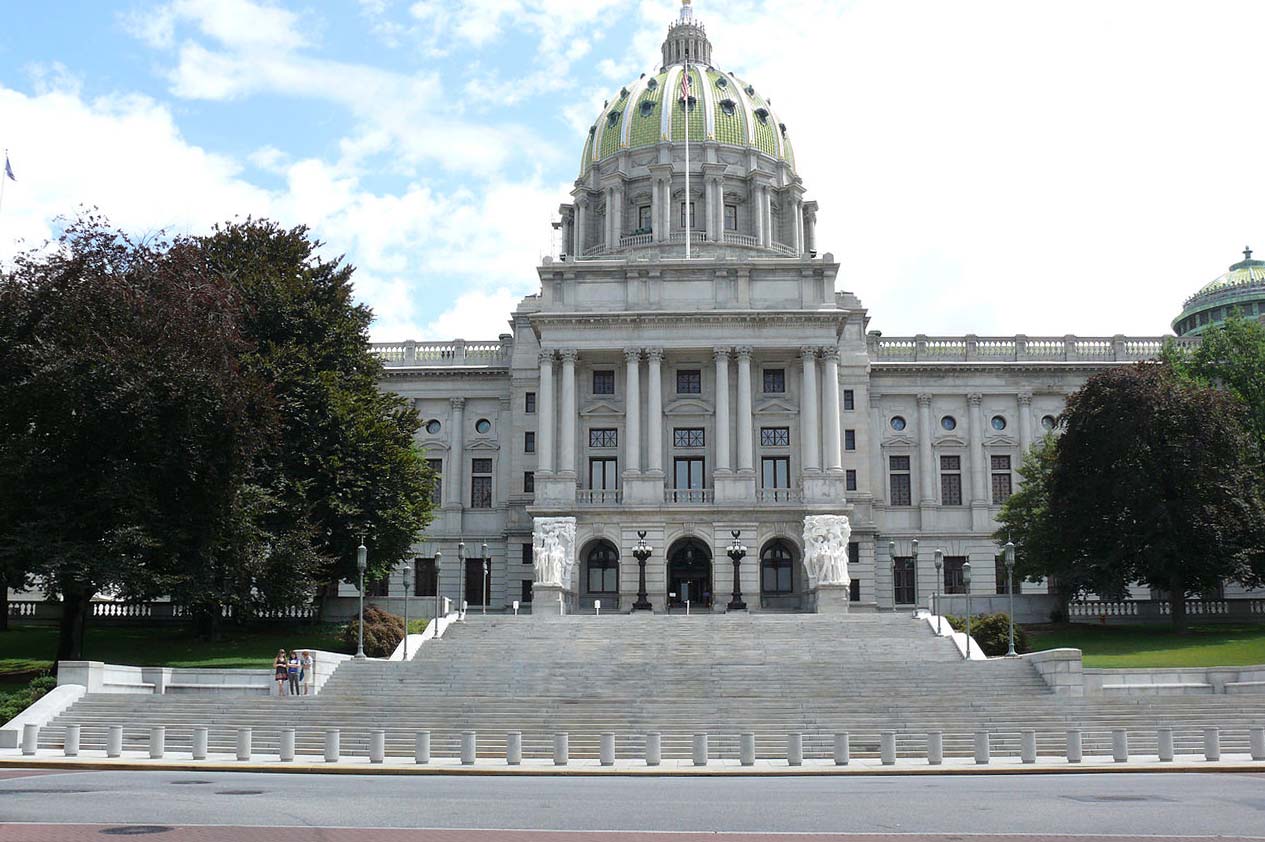 The Pennsylvania State Capitol in Harrisburg is shown in this file photo. (Photo by Ad Meskens)

The plea for Catholics in the Archdiocese of Philadelphia to urge their state legislators to oppose a bill that would allow civil suits for past cases of child sexual abuse will continue in parishes this weekend.

Information inserted into church bulletins, conveyed from pulpits and, in many parishes, printed postcards ready for mailing to legislators were made available over the previous two weekends, and will be shared again this Saturday and Sunday.

The postcards point out two of the main points of contention church leaders have voiced toward HB 1947, which would lift the statutes of limitation on civil lawsuits that are now time-barred.

That opposition centers on the fairness of the bill and its potential financial impact on the church statewide.

The bill, which passed the state House of Representatives in April by a wide margin, would allow civil lawsuits up to the victim’s age 50 and do so retroactively – suits could be brought in cases that are decades old, perhaps back to the 1970s.

The bill would treat private institutions such as churches, sports leagues and youth organizations differently than public institutions, such as school districts. They would only face lawsuits on sexual abuse prospectively, or going forward, not in the past.

Settlement damages for public institutions would be capped at $250,000 per plaintiff or $1 million in total related claims for state agencies, and $500,000 for local and county agencies, including school districts.

At the same time the bill would open private institutions to unlimited damages for settlements on cases of sexual abuse.

Archbishop Charles Chaput has pointed out that in other states where similar legislation passed, “local parishes have been sued, resulting in parish and school closures and charity work being crippled,” he said in a recent letter. “The effect of bills like HB 1947 is to erase the sacrifices of generations of faithful Catholics who have done nothing wrong.”

A provision of the bill that would lift the statutes of limitations on criminal prosecution for child sexual abuse going forward is not opposed by the church.\

The postcards, which were sent from the archdiocese to parishes for reproduction and distribution at churches, sum up the church’s opposition and urge legislators to oppose HB 1947 as well.

“Bankrupting the parishes, schools and ministries of today’s Catholics will not protect our children not provide healing,” the final paragraph of the postcard read. “No other institution has worked harder to right the wrongs of the past or protect the children in its care today.

“Vote no,” it urges the legislator to whom the card is to be mailed, “on unfair statute of limitations legislation, especially if it does not apply to private and public institutions equally.”

In addition to the postcards in church, Catholics were also urged to call or email state legislators by using a link on the website of the Pennsylvania Catholic Conference, the public policy arm of the state’s Catholic bishops.

While the House has passed HB 1947, the Senate has yet to take action on it.

The Senate Judiciary Committee held hearings with legal experts June 13 to begin deliberating on whether the bill would be constitutional in Pennsylvania. (See links to the spoken and written testimony and watch a video of the hearings here.)

Among others offering testimony, Bruce Castor of the state Attorney General’s Office explained that the U.S. Constitution provides a basic level of legal protection against reviving civil claims on cases stretching back decades when memories may fade and witnesses and evidence are scant or nonexistent.

The Pennsylvania Constitution adds an added layer with its “remedies clause,” and because of this, the retroactivity provision of HB 1947 would likely render it unconstitutional, Castor argued. Most of the other six experts offering testimony agreed with his assessment of the bill.

With the hearings concluded, the Judiciary Committee has been considering next steps. Action on the bill may come as early as next week, observers have speculated.

The committee could decide to sidestep the issue of constitutionality by approving the bill as is, sending it to the Senate floor for a vote now and, after it is signed into law by the governor, let the courts decide the matter.

The process of bringing suit to the bill’s constitutionality and seeing it wend up to the state Supreme Court could take years.

Alternatively, the committee could amend the bill to remove retroactivity since that provision represents the constitutional challenge, and if approved by a vote of the 14 members, send the bill to the full Senate for a vote.

If it passes in the Senate, a committee of senators and representatives could meet to hammer out a compromise bill. Or the two versions of the bill could remain unresolved and languish in this legislative session, which ends in December.

If that happens, the House would need to reintroduce a new bill in January 2017, perhaps beginning the process anew.

NEXT: Graduations up for at-risk youth in St. Gabriel’s System