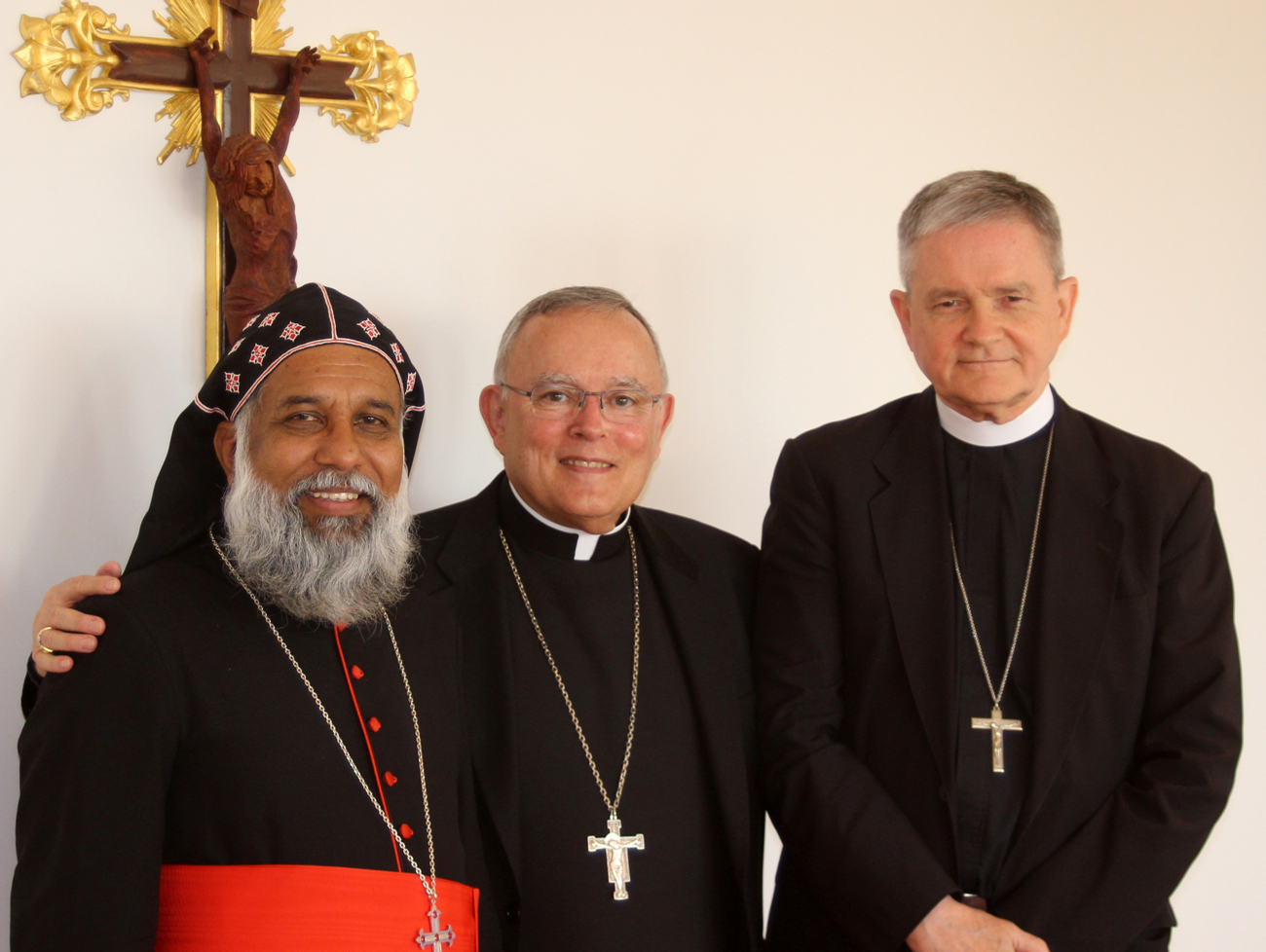 From left, Cardinal Baselios Cleemis, major archbishop of the Syro-Malankara Catholic Church, meets June 22 in Philadelphia with Archbishop Charles Chaput and Archbishop Edward Adams, a Philadelphia native priest and currently the Vatican’s apostolic nuncio to Greece, who coincidentally was in Philadelphia.

The global leader of one rite of Indian Catholics visited Philadelphia on Wednesday, June 22.

In the United States, the Eparchy of Mary Queen of Peace (akin to a diocese in the Latin rite) governs all the churches of the Syro-Malankara rite, including locally at St. Jude Church in Philadelphia’s East Oak Lane section.

The 57-year-old prelate became the Catholic Church’s youngest cardinal in 2012, the first ever named for the Syro-Malankara rite and therefore the first to elect a pontiff, Pope Francis in 2013. He spoke to archdiocesan officials here about the Catholic Christian communities in India and, with recent migration, in the United States.

Both Catholic rites trace their Christian roots to the evangelization of St. Thomas the Apostle himself in their land in the first century.

One reason Christianity took hold there and continues to grow, Cardinal Cleemis believes, is because of the fertile soil of openness by the predominant Hindu population of India.

While Christians make up 2.3 percent of the population, and Catholics only 1.8 percent, they enjoy respect and dignity in the country because that is “a cultural aspect of India,” Cardinal Cleemis said.

“The Hindu community in general are so loving and welcoming — all good values in human life. When Christianity came to India in AD 52, these are the people who received the Gospel. Therefore they have that inherent quality of receiving good things from others,” he said.

But incidents of violence against Christians have reared up in recent years in India, a fact that Cardinal Cleemis believes is a sign of political opportunism by minority actors in Indian society, not of religious hatred or discrimination by most Indians of any religious creed, nor by the secular Indian government.

He is loathe to call such attackers Hindu but rather “people who have not understood Hindu religion,” he said. “It is a tiny group but this group is trying to influence the vast majority of the Hindu population saying, ‘this is the only country we have as Hindus.’”

The cardinal sees such attempts to swing India from a secular state respectful of all faiths to one of a single religion, Hinduism, as misguided and out of step with India’s tradition and the will of its people set into the country’s constitution.

“The majority of Hindus are still secular, (which) means you accept the other religion as they are,” he said. “’Secular’ is not against religious values. Catholic and secular means you acknowledge Muslims and Hindus as they are.”

The majority Hindus, he said, “are a very God-fearing people, very welcoming people, and still they care for other communities as well. The vast majority are Hindu but it is not a Hindu nation. (It is) a federal republic with a secular constitution, a very open and welcoming community.”

The visit to Philadelphia is not the first for Cardinal Cleemis. He saw the local Catholic community here as an official for three years in the New York-based Mary, Our Lady of Peace Eparchy, which serves more than 11,000 Syro-Malankara faithful in the United States and Canada, according to 2012 Vatican statistics.

That was before he was called to take up leadership roles at a high level of the church in India. After serving as auxiliary bishop and archbishop in India, today he leads all the Syro-Malankara Catholics in the world as their major archbishop. He is also president of the Catholic Bishops Conference of India and serves on two Vatican councils.

As with many peoples immigrating to America, the first generation maintains strong ties to their homeland while the next generation becomes more firmly rooted here.

The same is true of Indian Catholics today, and Cardinal Cleemis sees it as “a positive thing. As they come to a new culture they have to get rooted in that. America has become their home. People will become conscious of their land — this land — and work for its progress.”

He believes Christians of Indian heritage can contribute to the Catholic Church’s emphasis in America on strengthening the family.

“I am sure our presence here in this great country will enhance further the growth of the family,” he said.

Although he sees divorce on the rise in many societies, “patience, sacrifice, mutual understanding” are strong values among Indian families. And moreover, “what God has united let men not divide. God has united you, it’s not a man-made reality,” the cardinal said. “That focus is to be given to the families, and I hope our liturgy and our sacramental life are also positively contributing toward our presence here.”

As one sign of the growing presence of Syro-Malankara Catholics’ growth in this area, Cardinal Cleemis pointed to “a very well established youth group in our eparchy here,” and said a diocesan youth assembly will gather this summer at Holy Family University in Northeast Philadelphia, July 29-31.