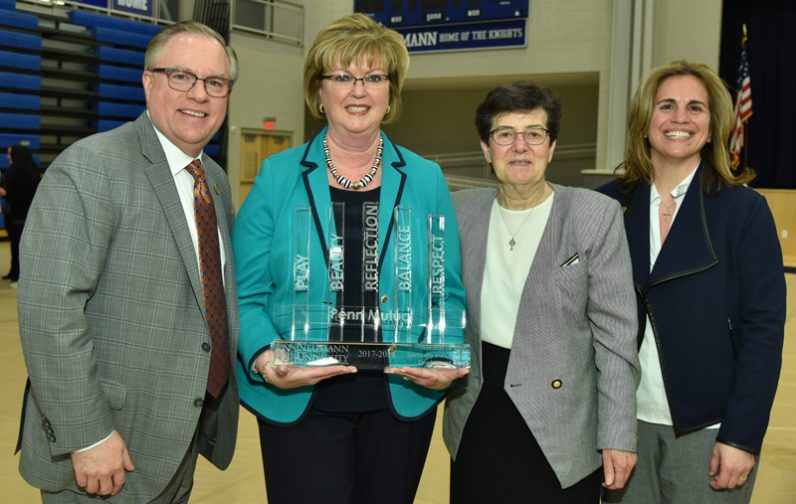 Eileen McDonnell (second from left), chair and CEO of Penn Mutual Life Insurance, accepts the 2018 Institute for Sport, Spirituality and Character Development Award on behalf of the company. Presenting the award in the Mirenda Center of Neumann University April 9 were, from left: Neumann President Chris Domes; Sister Marguerite O’Beirne, O.S.F., university vice president for mission and ministry; and Lee DelleMonache, director of the institute at Neumann.

It may be hard to imagine parallels between an English sport and a life insurance company, but not so for Penn Mutual.

Eileen McDonnell, chairman and chief executive officer of the Horsham-based firm, pointed to many similarities between her firm and rugby during a speech Monday, April 9 as she accepted the annual award of the Institute for Sport, Spirituality and Character Development at Neumann University.

“(W)hat we saw in rugby,” McDonnell said, “was the same values we live by — the same values honored in our Penn Mutual ‘Life of Significance’ award: integrity, respect, relationships, service. I believe that the living tradition of rugby … has something to teach us all, something you are honoring with this award.”

The CEO accepted the Institute Award on behalf of the entire company, calling it a “true privilege.”

Since 2011, Neumann University’s Institute for Sport, Spirituality and Character Development (ISSCD) has given its award to “outstanding individuals and organizations whose work in the sports world inspires an awareness to something deeper than game-day Xs and Os.”

Starting in 2014, the award has been given in honor of the late Bishop Joseph P. McFadden, formerly bishop of Harrisburg and an auxiliary bishop of Philadelphia, at the request of an anonymous donor.

That same year Penn Mutual became the title sponsor of the Annual Collegiate Rugby Championships. According to McDonnell, United World Sports presented the opportunity to Penn Mutual, and the more company explored the sport, “the more connections we found.”

Penn Mutual introduced its Life of Significance Award in 2015, given annually to a collegiate rugby player in the championships who has made substantial contributions to society and the community, and who exhibits the values of integrity, commitment and respect.

The award was created because “we wanted to demonstrate that student athletes were more than just athletes,” McDonnell said. Previous awardees have accomplished such things as starting book donation programs in their community to encourage literacy among underprivileged children.

Other Penn Mutual involvement in the sport includes sponsorships for the National Small College Rugby Organization and the Rugby Business Network, the creation of the Premiership Rugby American Series and the production of “Rugby Rising,” an award-winning documentary that provides an in-depth look behind the scenes at Olympic Rugby.

Both the Neumann and Penn Mutual communities agreed there was no better choice for this year’s award winner.

“We are honored to recognize Penn Mutual and proud to provide Eileen McDonnell the opportunity to share Penn Mutual’s story with the Neumann University community,” said Lee DelleMonache, director of the institute.

Neumann President Chris Domes lauded the “great gift” of the awardee to the university. “Neumann University’s values can exist in the corporate world and Penn Mutual is a perfect example of that,” he said.

NEXT: Accord helps equip Phila. church workers with business skills