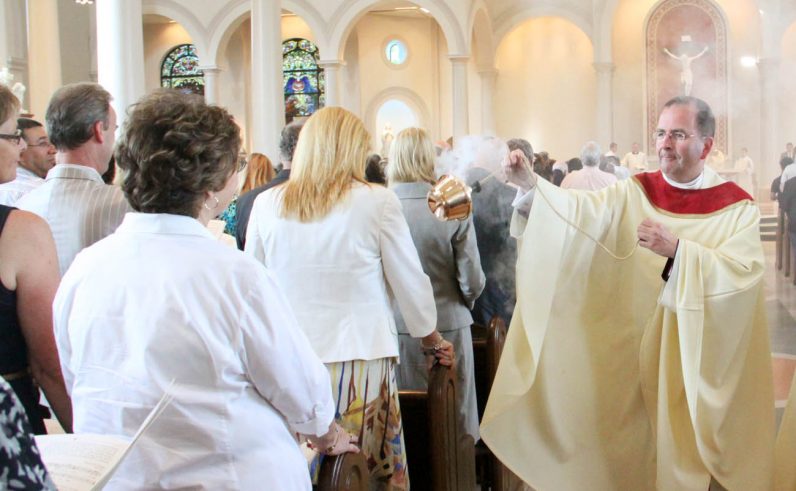 Msgr. Joseph C. McLoone, blessing parishioners during the dedication Mass of St. Joseph Church in 2013, has resigned amidst a cloud of financial scandal at the Downingtown parish. (Photo by Sarah Webb)

Msgr. Joseph C. McLoone has resigned as pastor of one of the largest parishes in the Philadelphia Archdiocese due to financial and personal improprieties.

The priest had taken a voluntary leave of absence as pastor of St. Joseph Parish in Downingtown in February, without public explanation. Msgr. Thomas Dunleavy was named parochial administrator weeks later.

Last weekend parishioners of St. Joseph’s learned that Msgr. McLoone was placed on administrative leave, imposed by the archdiocese. He tendered his resignation as pastor, which Archbishop Charles Chaput accepted.

Details revealed that when he arrived at the parish as administrator in 2011, Msgr. McLoone set up an off-the-books bank account that November to accept some donations by parishioners, but not Sunday Mass collections. The account had swelled to $110,000 over six years.

Some $50,000 had been paid from the account over that time, and of that amount, Msgr. McLoone had taken $1,500 “for personal expenses of an inappropriate nature” concerning “relationships with adults” not involving members of the parish, nor children, according to a statement by archdiocesan spokesman Ken Gavin.

He did not elaborate on the nature of the relationships but indicated they are a violation of the Standards of Ministerial Behavior and Boundaries, rules of conduct for all church personnel, clergy and volunteers that the Philadelphia Archdiocese established in 2003.

It is not uncommon, though deemed improper, for some parishes to utilize accounts outside the established archdiocesan norms of accounting and review to accept personal donations for the payment of ordinary parish expenses.

Use of such accounts often represents an attempt to evade archdiocesan accounting procedures and lessen the amount a parish is assessed for support of centralized archdiocesan ministries — in effect, attempting to benefit the parish by sequestering funds from accountability.

The archdiocese prohibits such practices in its parishes, schools and institutions, and in fact this week continued to roll out a long-planned new set of accounting procedures designed to tighten parish accounting and prevent off-the-books money management.

St. Joseph’s, with 4,742 registered households, is the largest Catholic parish in Chester County and the third largest in the archdiocese. With its new church (built in 2013), a burgeoning school and Parish Religious Education Program (PREP) along with numerous programs and ministries, the $110,000 in a separate account likely represents a fraction of the parish’s finances.

Nevertheless, because “activity from this account was not reflected in regular reports reviewed with the parish finance council or provided to the archdiocese,” Gavin said in his statement, accounts such as the one at St. Joseph’s are seen as an improper business practice.

In Msgr. McLoone’s case, he was “the only signer on this account and he acted alone with respect to the account’s activity,” Gavin said.

The account was frozen last February and a review of the parish’s financial records was begun by personnel from the archdiocesan Office for Parish Services and Support, according to Gavin.

“Based upon that work, it appears that deposits to this account consisted of some donations as well as other revenue generated by the parish,” he said. “The archdiocese does not believe that Sunday collections, contributions to the parish capital campaign, or school and PREP tuition fees were deposited therein.”

While some of the expenditures show documentation as normal parish expenses, others raised concern, Gavin said.

After Msgr. McLoone was questioned directly, he acknowledged the account and his personal use of its funds.

An investigation into the account continues because “there are still approximately $50,000 in expenditures and ATM withdrawals that need to be better substantiated or explained,” Gavin said, adding the priest has been asked to provide that information.

As the review continues,” further action will be considered including referral to law enforcement,” Gavin said.

He added the archdiocese “is pursuing full financial restitution” for St. Joseph’s “for the expenditures that have been acknowledged as inappropriate.”

The parish finance council also has advised Msgr. Dunleavy, who temporarily leads the parish, “to seek reimbursement for any additional amounts that cannot be appropriately explained or substantiated when this process is complete,” Gavin said.

Msgr. McLoone, 55, was ordained in 1988 for the Philadelphia Archdiocese and had served as parochial administrator of St. Joseph’s since February 2011, until being named pastor in December 2012.

He took over a parish that had been rocked by the arrest of its former pastor, Msgr. William J. Lynn, for his involvement as an administrator in the clergy sexual abuse scandal in Philadelphia.

Although his 2012 conviction for endangering the welfare of a child was overturned in 2015, Msgr. Lynn served most of his three-year sentence in state prison. The Philadelphia District Attorney intends to retry his case, perhaps this year.

NEXT: Neumann U lauds Penn Mutual’s support of rugby