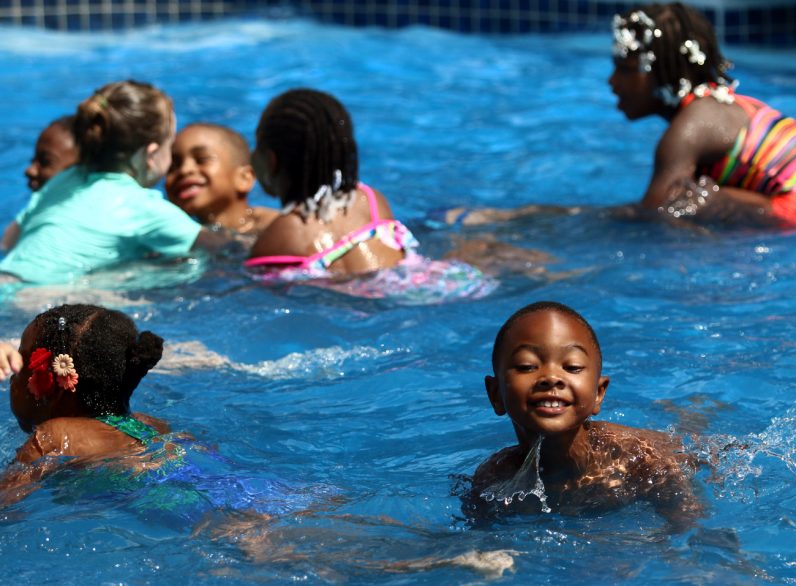 A student from the Out of School Time (OST) program cools off at the annual OST picnic, July 20. The event unites children and staff from OST’s 12 sites, through which archdiocesan Catholic Social Services provides academic and social support to almost 900 youth each year. (Photo by Sarah Webb)

On a hot summer day, there’s nothing like a diving into a cold pool and then chowing down at a barbecue with good friends.

That’s exactly what a few area kids – almost 800, actually – did at the eighth annual “Big Splash” picnic, hosted by archdiocesan Catholic Social Services (CSS) on July 20 for the youth in its Out of School Time (OST) program.

Now more than 20 years in operation, the outreach serves between 700 and 900 at-risk children and teens in grades K through 12 with an array of academic, recreational and social support services. Funded by a blend of public and private partnerships, the OST program operates year-round at 12 sites located throughout Philadelphia.

Campers converged at Neshaminy Shore Picnic Park in Hulmeville, the event’s traditional location. Swimming, basketball, moon bounces and carnival games were among the park’s offerings, along with miniature golf.

“The last hole is the hardest, because it’s at the top of the hill,” said Aiden, 8, who attends the OST program at Holy Innocents Parish in Philadelphia. “You can’t rush; you have to be patient.”

Other campers were equally intent about their golf game.

“I work hard at it, but I’m happy,” said 8-year-old Jordane, who is enrolled at OST’s Edwin Forrest School site in the city’s Mayfair section.

The festivities also included a dance performance by students from the OST site at St. Barnabas in Southwest Philadelphia. More than 50 campers from the group donned sunglasses for a routine set to Michael Jackson’s “Beat It.”

“I’m not going to lie, I was scared a bit as to how this would turn out,” said group leader Kaila Wilkie, who had choreographed the set only a few days earlier. “But they did a great job.”

Now a sophomore at Cabrini University, Wilkie is in her first season of working at the St. Barnabas site. Her background in dance and her studies in biology are put to good use by the OST program, which emphasizes STEM (science, technology, engineering and math) education, the arts and physical fitness.

Academic projects were set aside during the picnic, though, as OST staff and students relaxed and reunited with friends and colleagues from the program’s various sites.

View our photo gallery on the annual OST picnic.

“It’s like a homecoming,” said Jackie Ritter, director of the OST site at St. Barnabas in Southwest Philadelphia. “We see each other at trainings and on random trips, but having one outing where Catholic Social Services rents out the entire park for us – it just makes us feel like one big family.”

The description is an accurate one, especially since a number of siblings work for the OST program. Ritter’s younger brother, Erik, heads up the OST program at St. Malachy Parish in North Philadelphia. During his first year in the role, his sister Jackie provided introductory guidance, enabling him to forge relationships with several neighbors, including Temple University.

“They’re a great resource for staff and for academic support,” he said. “We’ve developed a good partnership with them.”

Sisters Tracey and Paloma Brooks collaborate at the St. Helena Parish OST in the city’s Olney section, where Tracy has just taken over as director. In her leadership role, she emphasizes the importance of family.

“I tell my kids before we get on the bus for every field trip, ‘All right, guys, watch each other’s backs. We are a family unit,’” she said. “And they say, ‘Yes, a unit!’” 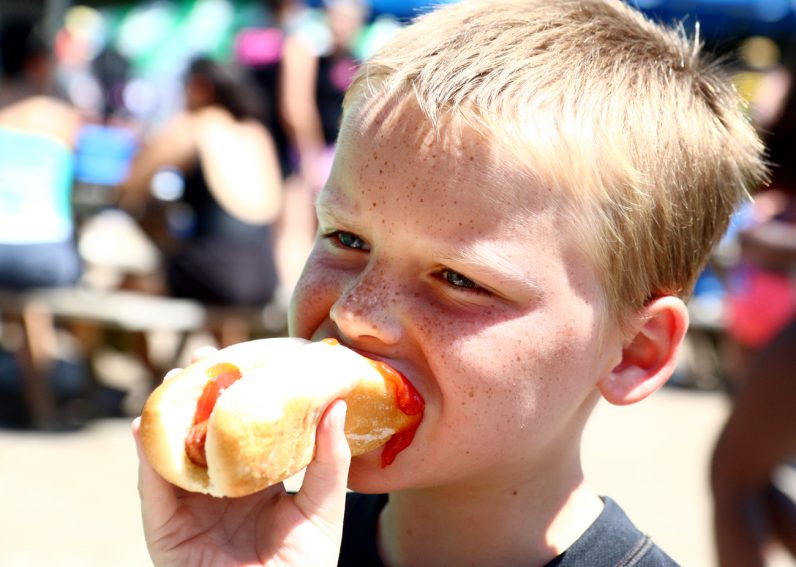 Younger sister Paloma noted that OST staff strive to provide a compassionate, personalized level of care and supervision for their students.

“You really get to know the kids,” she said. “I can tell you their birthdays, their favorite colors and foods. I’ll even tell a kid’s teacher, ‘Don’t forget his allergies.’”

With a nationwide increase in efforts to prevent child abuse, both CSS and its OST programs remain deeply committed to their core mission of strengthening individuals, families and communities, said Aggie Healey-Wilson, the administrator of the OST programs.

For OST staff, that work is a passion, extending well beyond business hours.

“I was driving in the car, and I thought it would be a great idea to have a t-shirt exchange at the picnic,” said Dee D’Aulerio, the director of the OST program at Holy Innocents. In her spare time, D’Aulerio devised a plan for campers to trade their brightly colored, site-specific OST shirts among each other.

“It gives kids more ownership of the event,” she said.

The OST students feel at home among the staff and each other, added Jackie Ritter.

“Our attendance is good at all of our sites,” she said. “So we know we’re doing something right, when kids want to come and they cry when they have to leave.”

NEXT: Pizza and parenting make for a great lunch lesson by Catholic Community Services