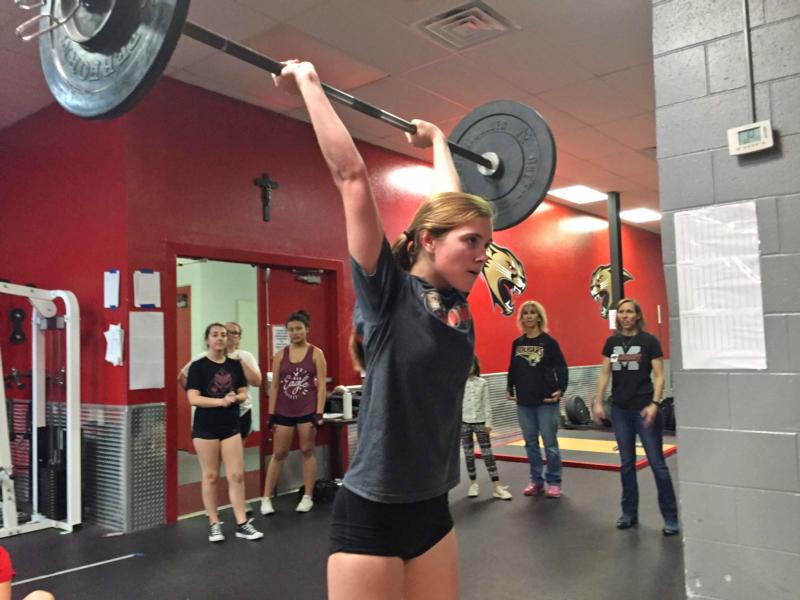 Grace Dickinson, a senior at Cardinal Mooney High School in Sarasota, Fla., performs a dead lift to an overhead press with 95 pounds as her coaches observe her Dec. 19, 2018. This is the inaugural year for the girls weightlifting team at the Florida Catholic school. (CNS photo/Jean Gonzalez, Florida Catholic)

SARASOTA, Fla. (CNS) — Ashley Savigne looked intently at the barbell for her dead lift to an overhead press.

The 45-pound bar had 10-pound plates on each side. The high school sophomore at Cardinal Mooney High School in Sarasota took a deep breath and, with a look of determination, bent in the squat position. Her hips were slightly higher than her knees, as they should be. She picked up the barbell with her arms straight and extended.

Holding it steady, she was ready for the next step — lifting it over her head. To do so, form again was critical. But at some point, she realized she made an error in form, and instead of continuing the motion incorrectly, she abandoned the lift and put the bar back down on the mat.

Loudly. And with a bit of force. So much so that she lost her balance and fell on her rear.

A little embarrassed, she started laughing at herself. But her coach, Scott Ruane, was right there to offer honest encouragement.

“Ashley you were so close. You almost got it,” the Cardinal Mooney weightlifting coach said. “And if you’re going to fail, fail like that.”

After Ruane identified flaws in her technique, Ashley went right back to task. With fellow weightlifting teammates cheering her on, Ashley lifted the weight, her posture and technique perfect. The cheers filled the room and Ashley ended her lift with a nod to herself and a smile.

“The girls respect each other for lifting weights. It empowers them as females,” Ruane said. “It gives them confidence and a powerful experience.”

This is the first year the Catholic high school offered girls’ weightlifting. The idea began in the summer when Ruane offered a weightlifting clinic. Years ago, the school had offered a program for girls, although not a separate team; they trained with boys. Meets were done on an informal basis because the Florida High School Athletic Association did not recognize it as a sport.

But now other high schools have teams and there are formal meets for girls’ weightlifting. Seeing a renewed interest in the summer clinic and the opportunity to perform at meets, Ruane, who also helps with football, took a chance and drew a little more than a dozen girls, many of whom participate in other sports.

He speculated some of the initial interest might have just been curiosity and another outlet to socialize as a female athlete, but it took no time before team members took the sport seriously.

And although this is Ruane’s first foray in teaching a sport exclusively with girl, he noticed the difference between female and male athletes.

“Girls are more meticulous in the best way possible,” Ruane told the Florida Catholic, newspaper of the Orlando Diocese. “They do exactly as you say and the biggest thing about that is they develop good habits for what they are doing. They believe in learning step by step.” He added that the girls on the team don’t try to one-up each other, which might happen with guys in the weight room.

But Alice Smithers, assistant coach for the team, was quick to say that doesn’t mean the girls aren’t competitive. In a way, they drive each other, with one teammate’s success fueling the others. “Most of these girls play other sports, but a lot of them never even touched a bar before,” said the former swim coach, who has been a fixture at Cardinal Mooney for two decades.

Grace Dickinson, a senior, said she enjoys the sport because of the balance between technique and power and for strength building and being part of a team.

Dickinson was glad that others have joined the team, especially since there is that nagging perception that weightlifting is for guys, which might make girls reluctant to join. She also thinks that attitude is changing.

Next year, Dickinson plans to attend the University of Pittsburgh and even though she doesn’t plan to play college sports, she said she will continue to work out and weightlift through clubs because it’s what she loves to do.

“Having weightlifting at school is empowering because of all the support and encouragement from our team and school,” she said.

Sarah Gates, a theology teacher at the school who helps with the team, loves how the girls have embraced weightlifting as a sport.

Gates, a graduate of Cardinal Mooney, said when she was an athlete at the school, the girls weren’t in the weight room at all. “Everything was running, running, running. No ab work and no upper body.”

“For some girls, they might have competed as cheerleaders, or did cross-country or volleyball, but this is a new challenge. And these girls look like they belong here. It really is this girl power atmosphere, and it makes me feel so proud.”

Gonzalez is editorial/online director at the Florida Catholic, newspaper of Archdiocese of Miami and the dioceses of Orlando, Palm Beach and Venice.