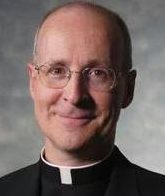 I want to thank Archbishop Chaput for his thoughtful response to my recent lecture at St. Joseph’s University “Building a Bridge: Reaching Out to the Excluded in Our Church.” However, I was sorry that he felt the need to publish it.

I think my main response to his column is that it’s difficult to respond to critiques that I am “implying” things about church teaching, when I am assiduous in my writings and talks about not challenging church teaching on matters of sexual morality (or anything, for that matter). I have written clearly about that in America magazine, among other places, for example, in my article “What is Official Church Teaching on Homosexuality?”

Also, the lecture at St. Joseph’s University this week, which prompted his column, is the same lecture that I presented at the World Meeting of Families in Dublin last year, the text of which was vetted and approved beforehand by the Vatican.

One of the reasons that I don’t focus on same-sex relations and same-sex marriage, which I know are both impermissible (and immoral) under church teaching, is that LGBT Catholics have heard this repeatedly. Indeed, often that is the only thing that they hear from their church.

What I am trying to do instead is encourage Catholics to see LGBT people as more than just sexual beings, to see them in their totality, much as Jesus saw people on the margins, people who were also seen as “other” in his time.

I remain grateful for the Archbishop’s asking people not to engage in “ad hominem” attacks, and I appreciate the careful tone of his letter and have always appreciated his kind communications with me. And may I take this opportunity to thank him for his service to my beloved hometown of Philadelphia.

I appreciate Father Martin’s typically gracious comments, which are consistent with the man. They do not, however, change the need for my column. I’m sure Father Martin would agree that “official” Church teaching (as opposed to some alternative, imagined, unofficial system of belief and practice) is simply what the Church believes based on the Word of God and centuries of experience with the human condition.

Moreover, the point is not to “not challenge” what the Church believes about human sexuality, but to preach and teach it with confidence, joy, and zeal. Biblical truth liberates; it is never a cause for embarrassment.

Finally, Father Martin and I emphatically agree that persons with same-sex attraction are children of God and well loved by him. Thus they deserve to be treated with respect and dignity. The Church must earnestly seek to do that while remaining true to her convictions.

But it is clearly not true that the “only thing” Catholics with same-sex attraction hear from their Church is a message of rejection. Or if it is, perhaps the responsibility can lie as much with the listener as it does with the Church. We each have the freedom to choose. Listening, like teaching, is an act of the will.

PREVIOUS: The fine thing about friends

NEXT: Pope’s letter uplifts all priests celebrating Christ among his people