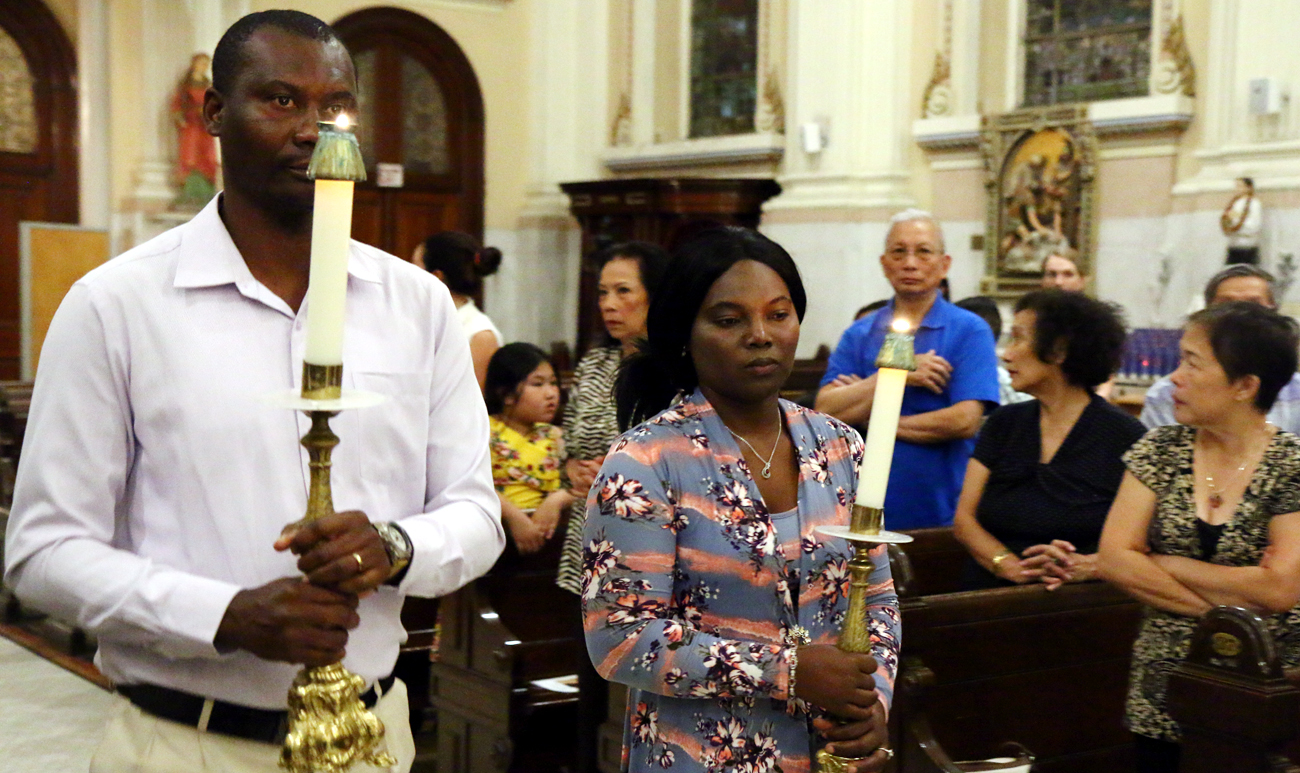 Participants process into St. Thomas Aquinas Church in Philadelphia during a Sept. 23 prayer service to mark the 2019 World Day of Migrants and Refugees. The archdiocesan event drew some 300 attendees, who reflected on both Scripture and first-hand accounts of migrant and refugee experiences. (Photo by Sarah Webb)

School may be back in session, but for 15-year-old Cherilynn Chow, life is anything but normal.

Chow, a member of St. Thomas Aquinas Parish in South Philadelphia, is now tackling her classes and extracurricular activities without the support of her parents. The couple, who for the past 20 years have been active leaders in the local Indonesian Catholic community, were detained by U.S. Immigration and Customs Enforcement (ICE) in July, and are now being held in separate prisons in York County.

“Everything has changed for me,” said Chow. “I have never been separated from them, and I don’t know what to do without them.”

Through tears, Chow shared her story at a Sept. 23 prayer service hosted by St. Thomas Aquinas Parish in Philadelphia to mark the upcoming 105th World Day of Migrants and Refugees on Sept 29. Organized by the Archdiocese of Philadelphia, the gathering — which drew some 300 attendees — blended Scripture, intercession, worship music and testimonies from migrants and refugees.

Members of various archdiocesan cultural and ethnic communities — including the Filipino, Indian, Vietnamese, Pakistani and Haitian — were on hand, as were women religious from the Sisters of St. Joseph and the Sisters, Servants of the Immaculate Heart of Mary (IHM) and the Assumption Sisters, among others.

(Related: View a photo gallery of the Sept. 23 prayer service.)

“We are gathered here as brothers and sisters, even though we are from diverse backgrounds,” said Assumption Sister Gertrude Borres, director of the Archdiocese’s Office for Pastoral Care for Migrants and Refugees and coordinator of the event.

In his homily, Auxiliary Bishop Edward M. Deliman described the issue of immigration as “a moral quagmire that begs for a just solution, and for the wisdom and guidance of the Holy Spirit.”

According to the United Nations’ refugee agency (UNHCR), the number of displaced people has tripled in the last 25 years, reaching a record 71 million worldwide. Conflict, persecution, human rights violations and, increasingly, natural disasters are driving the displacements.

Chow’s parents faced both ethnic and religious persecution in their native Indonesia due to their Chinese heritage and Catholic faith.

“They left everything they had just to try to make a living here,” she said.

Momolu Siryon was tortured along with his brother in their native Liberia, which saw two civil wars (1989-1996 and 1999-2003) that killed an estimated 200,000 to 250,000. Now on staff with the refugee resettlement program of archdiocesan Catholic Social Services (CSS), Siryon told attendees that his experiences fuel his “passion to help” those fleeing similar horrors.

“I see myself in the faces of those I serve,” he said. “I know what trauma is like. I lived it.” 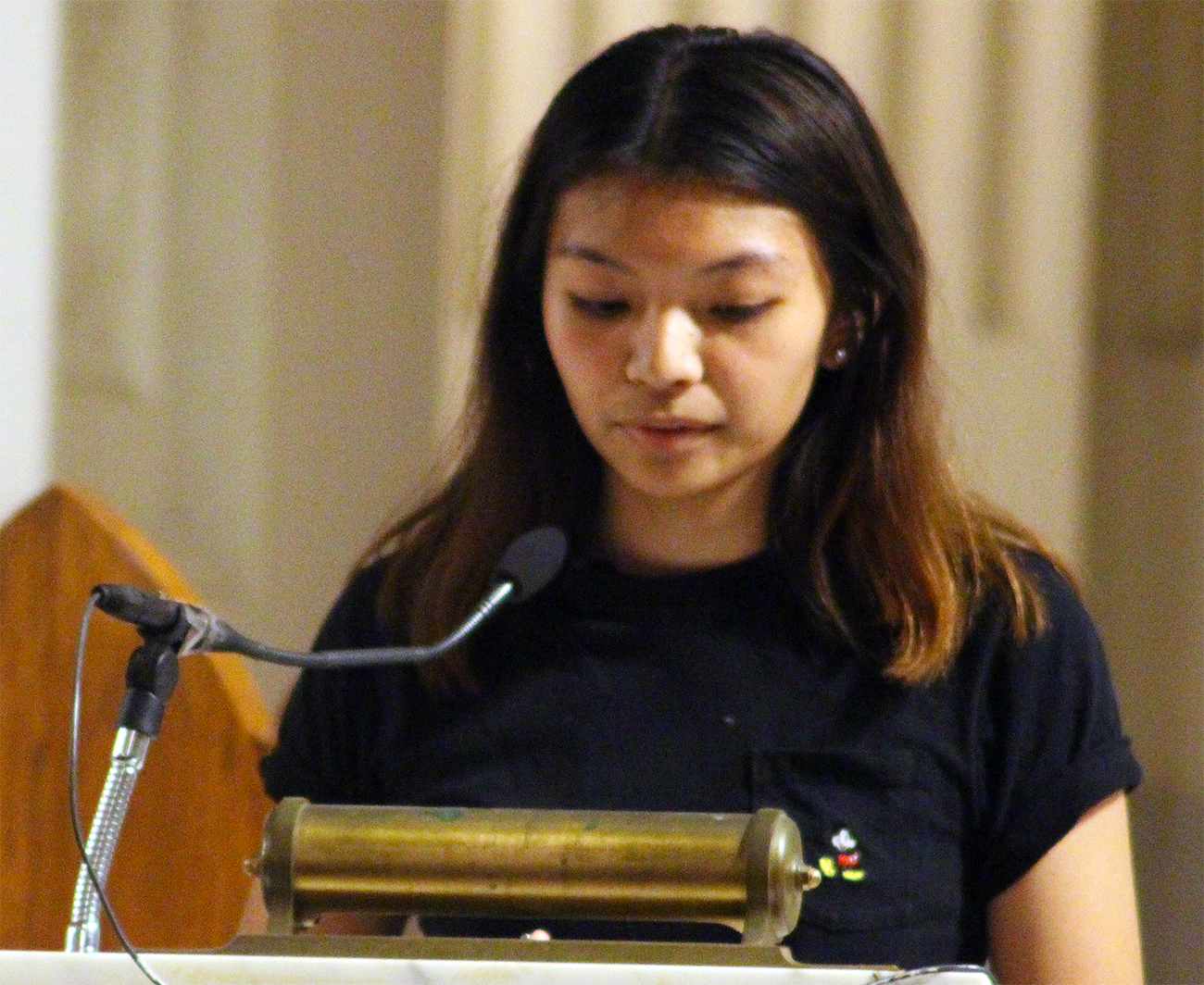 Cherilynn Chow of St. Thomas Aquinas Parish in Philadelphia shared how her parents, who immigrated to the U.S. from Indonesia 20 years ago, were imprisoned by U.S. Immigration and Customs Enforcement in July. The couple are being held in separate prisons in York County, leaving 15-year old Chow and her sister to rely on community support. (Gina Christian)

America Martinez was forced to migrate after a hurricane devastated her Mexican hometown. Speaking in Spanish through an English interpreter, Martinez described St. Thomas of Aquinas Parish as “her new family.”

The “overwhelming numbers” of current migration levels demand that we “listen to what God is asking of us,” said Amy Stoner, director of CSS’s community-based and housing and homeless service divisions.

Stoner, who also oversees CSS’s refugee resettlement program, quoted Pope Francis’ theme for this year’s observance of World Day of Migrants and Refugees: “It’s not just about migrants; it’s about all of us.”

Chow echoed the sentiment, noting that her parents’ “dehumanizing and cruel” separation from their children “is happening to many other families in the United States, and can happen to someone you know.”

She added that such detentions “show just how much hatred is in this country.”

A dangerous ‘erosion of rights’

“I see so many overlaps between the system we’re building here in the U.S. and genocidal processes at their early stages,” said von Joeden-Forgey, who recently visited Chow’s mother, a longtime friend, in prison and attended the Sept. 23 event to support Cherilynn.

“The ICE detainees are not even allowed to see the sunshine, and she hasn’t been outside for two months,” said von Joeden-Forgey. “Prisoners of war are treated better, if they’re treated in accord with the Geneva Convention, than ICE detainees.”

She added that the nation’s growing “prison industrial complex” is a huge part of the problem, especially since ICE’s contracts with for-profit prison corporations and county correctional facilities provide “an economic stake in the dehumanization and criminalization of others.”

Von Joeden-Forgey also pointed out that “there’s a slippage that happens” when prisons are used as a mechanism to remove entire groups of people from a society.

While advocating for specific groups is important, she said, the real key is to focus on upholding human dignity as a whole.

(Watch a video of Cherilynn Chow describing what life is like without her parents, who were detained by U.S. immigration officials.)

“If we take Pope Francis’ words seriously, no human being should ever be treated that way,” she said. “And as long as one person can, then anyone can. Anyone in that system could be us.”

Bethany Welch, executive director of the Aquinas Center, observed that “there are roadblocks at every turn” in the immigration reform process.

“We’re not seeing much traction in terms of laws changing,” said Welch, whose organization — which is located on the campus of St. Thomas Aquinas Parish — promotes cultural exchange and immigration support through an array of programs.

Concrete action at the parish and community level is needed to “assert not simply the rights of migrants and asylum seekers and refugees, but the rights of all human beings to exist in a just and safe world,” said von Joeden-Forgey.

‘Here for a purpose’

As part of that effort, migrants and refugees should be seen as collaborators in building the kingdom of God on earth, said Bishop Deliman.

Citing Pope Francis, Bishop Deliman offered the example of St. Frances Cabrini, who left her native Italy in 1889 to work with fellow Italians emigrating to the United States. Through dialogue and integration, the dramatic influx of new languages and cultures at that time became, as Pope Francis said in a 2017 address, “a gift to the churches” that imparted “human and Christian vitality.”

Alfred Yenkson believes his own life is proof of just that. The former diplomatic agent to China and his family found themselves endangered in their native Ivory Coast, dodging threats of murder and sexual violence. Ten years ago, they applied for asylum in the United States and resettled in West Philadelphia, where they launched a charismatic renewal group at St. Barnabas Parish, as well as similar groups at Annunciation B.V.M. Parish (now part of St. Rita of Cascia) and St. Nicholas of Tolentine.

(Watch of video of Samuel Z. Abu describing how his own experiences as a migrant have inspired him to help others.)

“God brought me here for a purpose: evangelization,” said Yenkson, “and to help also Americans know that we are all one, from the one Father.”

Philadelphia area attorney Scott George said that the Sept. 23 service “was a microcosm of what faith can be.”

“The solution’s already there,” he said. “You just have to widen the doors to include everyone.”

At the end of her testimony, Chow asked those present to “ask God to share his love with our President and with the judges and officers and everyone else that is affected” by the issue of immigration.

“We need to start to learn to love each other again, and make America great and united in God’s love,” she said. “I just want to ask you all to pray to God and ask to share this love with everyone, so that parents can stop being ripped apart from their children.”