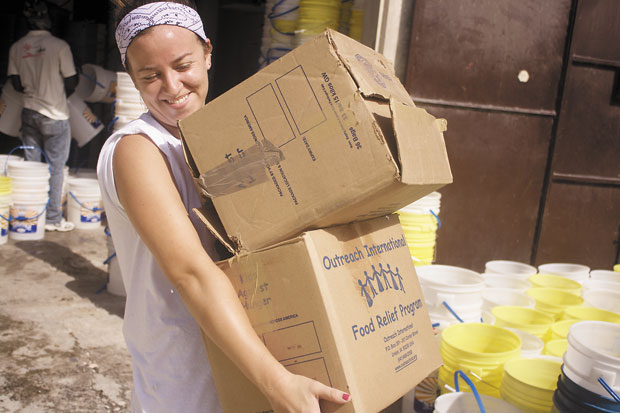 The poverty in Haiti was unlike anything Lindsay Ward had ever seen. Children as young as 8 years old lined up with teens and adults along the fence at Port-au-Prince International Airport to beg for money or food. At a local school, lessons were conducted in a shack.

Las Cayes General Hospital was a concrete building with a room in each wing assigned for various purposes — the emergency room, the operating room, the recovery room and pediatrics.

Families of surgical patients at the hospital, which is “not like any hospital we know,” Ward said, are required to provide blankets, syringes, bandages, sheets and blankets. They are also responsible for keeping those supplies clean.

Roads in many places were non-existent and, when the rains came, Ward and her group trudged through mud up to their ankles until the truck transport could find traction on solid ground. The temperature each day lingered at a steamy 105 degrees, but the blazing sun conspired with soaring humidity to make it feel like 115 degrees, meteorological records show.

“It wasn’t very comfortable, but then we weren’t there for comfort,” said Ward who traveled June 6-11 with a group from the Jesuit-run University of Scranton to work with religious and lay people trying to alleviate Haiti’s suffering. Participants went without air conditioning or hot water, and woke up to the sounds of chickens squawking under the dorm window.

The group spent a week in a country that had already worn the dubious mantle of the poorest country in the western hemisphere when it was decimated by an earthquake in January 2010. Buildings collapsed, families were separated, children were orphaned and the daily grind of trying to find enough food to eat became a nightmare.

But it was in this setting that the 20-year-old junior, a member of St. Ephrem Parish in Bensalem, “deepened my faith, found out more about myself, and left a piece of my heart,” Ward said.

During their tours, she and her classmates also visited orphanages where the children grabbed and held onto the hands of their visitors. Some of the children played games while others just looked up and smiled.

“These children have some of the most depressing life stories, but they find the strength to have the most unbroken spirits,” Ward said.

One of the mission projects was to make survival buckets, which were five-gallon tubs into which the young students put food packages, soap, detergent, toothbrushes, toothpaste, water purification tablets, matches and candles. At the end of each day, the students took time for reflection and to answer this question: Where did you see God today?

Ward, who is taking a double major in business plus marketing and management at Scranton, said that she will always find time to help others, no matter where her career takes her.

“I saw God everywhere,” she said. “I saw so much and I learned so much. I know not to judge people, especially by what they wear or what circumstances they live in. I came home with a better understanding of where I stand with my faith, and that makes me want to be the best person I can be.”

Ward said she plans to take part in another ministry program next year, although she’s not sure what country she’ll travel to. She was thrilled, however, to be notified that the next time out, she’ll be a peer facilitator. Translation: She’ll be in charge and all the coordination details will be her responsibility.

Scranton’s International Service Program began in 1987 with a mission to Mexico, but since that time the ministry program has grown to include the Dominican Republic, Guyana, Jamaica, El Salvador and, for the first time in the spring of 2012, Honduras, said Elise Gower, director of the program.

NEXT: St. Eleanor parishioners make it to Mass despite flood waters