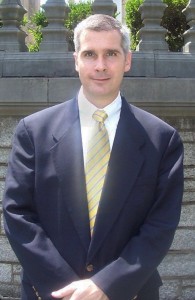 Kelly Bowring, the new dean of the Graduate School of Theology and Program of Catholic Studies at St. Charles Borromeo Seminary in Wynnewood, wants a return to orthodoxy in Catholic higher education.

His recent book, “To Hold and Teach the Catholic Faith,” asserts that post-Vatican II witnessed the dilution, abandonment and in some cases “suppression” of Catholic traditions and revealed truths in favor of “personal opinion, subjective experience and avant garde theories.”

“To be lay Catholic leaders in many parishes in this period, one had to advocate the American pop culture more than the Creed,” he wrote.

Despite what he calls “a crisis of faith and culture” in Catholic higher education, Bowring foresees a global renewal. “In some places it’s already under way,” he said. “People are taking their faith more seriously, and more are considering religious vocations.”

And leading the way, he believes, is St. Charles Borromeo Seminary and its new Graduate School of Theology (GST) and Program of Catholic Studies.

“GST sees itself as playing a more significant role in the Catholic educational renewal of our times — regionally, nationally and internationally — that Pope John Paul II called for in his apostolic constitution, “Ex Corde Ecclesiae.”

The Archdiocese has its own precedent in the pioneering work of St. John Neumann. In his six years as bishop the number of Catholic schools grew from two to 400.

“Just as Neumann responded to the enormous wave of immigrant Catholics to America, so too GST is responding to the needs of our time, to counter the prevailing crisis of faith, by helping to usher in the springtime of the New Evangelization,” said Bowring, a noted Catholic theologian and popular speaker.

He received his pontifical doctorate from the University of St. Thomas Aquinas in Rome; his licentiate from Dominican House and the John Paul II Institute in Washington, D.C., while working at the U.S. Conference of Catholic Bishops. He earned a master’s degree from Franciscan University of Steubenville, Ohio.

Bowring has been dean of spiritual mission and a professor of sacred theology at Southern Catholic College in Georgia and an institute director and theologian at St. Mary’s College of Ave Maria University in Florida.

The family attends daily Mass, prays the rosary and the Chaplet of Divine Mercy, and participates in eucharistic adoration.

Bowring recently wrote a best-selling book, “The Secrets, Chastisement, and Triumph of the Two Hearts of Jesus and Mary.”

“We thank the Lord and the Blessed Mother for bringing us to Philadelphia to begin our new adventure in this notably Catholic city of two U.S. saints, a nationally recognized seminary and a great new Archbishop,” he said.

In “To Hold and Teach the Catholic Faith,” he quotes Pope Benedict XVI’s plea that “All Christians — children, youths and adults, families and communities [are called to] become catechists and evangelizers in all environments, helping others to encounter Christ.”

John T. Gillespie is a freelance writer and member of St. Bridget Parish.

NEXT: Respect Life Mass and day for H.S. students honor the unborn