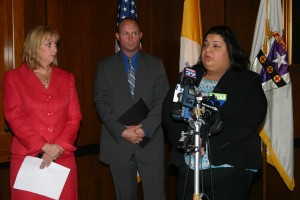 Leslie Davila, right, director of the archdiocesan Office for Child and Youth Protection, speaks to the media yesterday during a press conference regarding the charges filed against Neumann-Goretti baseball coach Lou Spadaccini. Also participating in the press conference were John Murawski, president of SS. Neumann-Goretti High School, and Donna Farrell, director of communications for the Archdiocese.

A Catholic high school baseball coach has been arrested in Philadelphia on nine charges including assault and corrupting the morals of a minor.

Lou Spadaccini, 37, coached at SS. John Neumann Maria Goretti High School in South Philadelphia since 1995 as an assistant, and was head coach since 2006.

A court report issued Sept. 20 showed the incident leading to the arrest occurred Sept. 18 but included no further details.

Spadaccini faces charges including endangering the welfare of a child, luring a child into a vehicle, interference with the custody of children, reckless endangerment, possession of a controlled substance and supplying alcohol to a minor.

He is free on bail and awaiting arraignment scheduled for Oct. 6, according to the court document.

Spadaccini was admired for his role as a coach by students, faculty and staff at Neumann-Goretti and in the community as a standout athlete, according to school president John Murawski, who spoke at a press conference Sept. 20 at the Archdiocesan Office Center in Philadelphia.

He said Spadaccini, who did not serve as a teacher at the school, has been suspended pending further investigation and he may not perform any duties within the Archdiocese of Philadelphia.

“We at Neumann-Goretti are shocked by today’s news,” Murawski said. “Coach Lou was an admired coach and an upstanding member of our community and the Neumann-Goretti family. We are really saddened and shocked. Our administration has been communicating with the parents as soon as we received word of the allegations.”

He said a letter explaining the situation was sent to parents on Tuesday, and administrators spoke especially to members of the baseball team and other students.

“Obviously our deepest concern is for the students and their welfare,” said Murawski, a former student of the all-boys St. John Neumann High School which merged with all-girls St. Maria Goretti High in 2004. Murawski was a student while at Neumann but did not know Spadaccini at the time, he said.

“We’re trying our best to let our students and our faculty know that the services of counselors and additional support services will be available.”

Spadaccini last coached the team in the spring, after which he was named Catholic League coach of the year. While Neumann-Goretti baseball players this year are playing in a fall league, they were led by assistant coaches, not Spadaccini, according to Murawski.

Archdiocesan administrators, including Leslie Davila, director of the Office for Child and Youth Protection, confirmed that Spadaccini’s criminal background checks were in place, allowing him to work with young people in the Archdiocese.

“The most important thing,” said Davila, “is to assure the Archdiocese and the community that we are focused on protecting children and creating a network of safety and protection for them. That’s our bottom line: We want to make sure children are protected.”

NEXT: New head of Black Catholics Office looks to get creative