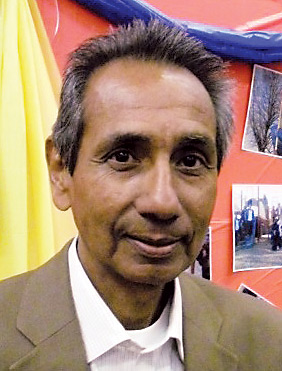 Giovanni Morante, 56, who was administrator of Catholic Social Service’s Casa Del Carmen for 16 years until taking a leave for health reasons in 2010, was honored by his friends and colleagues Oct. 14. That’s also when Casa’s brand-new playground, with its various-sized slides, climbers, chinning bars and rings, was formally christened as “Giovanni’s Playground.”

Despite the rain that forced the festivities to be held indoors, Morante was beaming.

“I’ve always expressed an interest in the little ones,” he said. “Kids are the future of the community. The dedication was very nice.”

Born in Lima, Peru, after graduation from the Universidad Inca Garcilaso de La Vega, Morante came to the United States and Philadelphia in 1986 on a Fulbright scholarship, with an internship at the John F. Kennedy Mental Health Center.

In 1994 he came to Casa del Carmen, an archdiocesan social outreach center to the Hispanic community founded in 1954 and now located at the former St. Henry Church in North Philadelphia.

He converted the St. Henry property into a community center that now provides full-day certified day care for 37 children along with after-school activities for 35 young people and hosts several community meetings and events.

He effectively built many alliances and partnerships with other social service agencies and educational institutions and created a network of relationships with Casa’s neighbors and local community leaders. That all resulted in Casa del Carmen being seen as a vital part of strengthening the life and identity of its North Philadelphia neighborhood.

“Basically we provided a variety of social services to families,” he said, “for example, workshops for parenting, after-school programs and a day-care center. We have a food bank, counseling services. It provides services for all people, not only Catholics, but anyone who comes to the door. It’s a spiritual place for all of us.”

Morante, who has lost his wife to cancer, was diagnosed with colon cancer five years ago, and it was hard to accept. “I don’t feel like an old person; and with colon cancer you can feel that life is unfair. You have to go through it to understand it,” he said. “I was a renegade. I was into sports.”

What has really helped him through this experience has been the prayers and encouragement of friends and colleagues. “It was amazing to me the support I received, that was nice,” he said.

Although he is no longer at Casa, the team he personally hired and trained continues to seek his counsel, and because of this his imprint will continue into the future.

He still takes treatment to fight his cancer mostly at Jefferson University Hospital and Nazareth Hospital. Although he lives in the Summerdale section of Northeast Philadelphia, he is active at St. William Parish a few miles away, where the local Peruvian community is replicating the traditional pilgrimages and festivals of their native land.

“I’ve learned to accept this in a deeper way,” he said. “I’ve become more spiritual, the Church has become extremely important to me and I accept whatever God gives to me.”