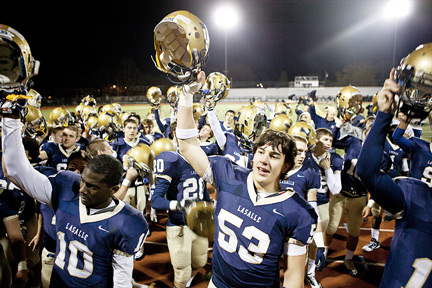 Football historians will immediately attach the name of late Oakland Raiders owner Al Davis to that brief motto. At the proverbial end of the day, that was the goal.

While La Salle High School’s gridiron gang shouldn’t be likened to a professional outfit, the Explorers’ success over the past four years — and five of the past six — could be summarized by those terse three words.

“We take a lot of pride in how we play,” said senior linebacker Sean Burke. “We have a winning tradition and no one wants to see that end.”

In becoming the fourth Catholic League school to ever garner such accolades, La Salle served emphatic notice that when it comes to on-field football success, the Christian Brother institution is undeniably the gold standard.

“When we lost earlier in the year (41-17 to Bergen Catholic back in La Salle’s second game), it was a bad feeling,” said senior running back Tim Wade, who in the Catholic League semifinal against Father Judge contributed an unbelievable 298 yards on the ground and for the season has amassed 1,365 yards and 19 touchdowns. “We didn’t want to experience that again.”

Apparently so. Since that loss, the Explorers have reeled off 10 straight victories while outscoring their opponents by 312-117.

These days, winning the Catholic League championship is the first peg en route to true greatness. Since the Pennsylvania Interscholastic Athletic Association inherited the Catholic League three years ago, local bragger’s rights have extended all the way to the western wing of the state.

While the Explorers, after bouncing Public League champion George Washington in the District 12 final, 41-7, are now in pursuit of their second state title, winning the Catholic League title is more than just a trip along the journey.

The Explorers, who won the 2009 state title and lost in last year’s final, will take on Nazareth High School 1 p.m. Saturday, Dec. 3 at Bethlehem Liberty. La Salle is one of three teams representing the Catholic League in the PIAA quarterfinals.

With the Catholic League and District 12 titles already framed, all three teams are aiming high. And, in a heartwarming show of solidarity, each team traditionally roots for the others to do well in their respective opportunities no matter how well they do in their own pursuits.

“When you play a team, you want nothing more than to beat them,” Burke said. “But in something like the state tournament, you definitely pull for the Catholic League to win. It’s a great league, and the better we do in states, the more everyone understands how great our league is.”

NEXT: Father Judge off to a hot start