A Lenten sacrifice so that others may eat 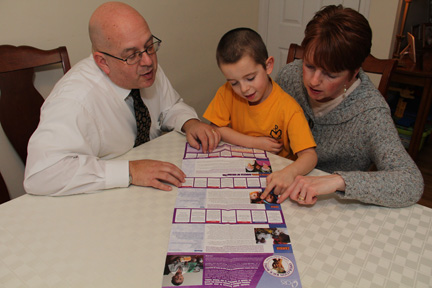 Anthony (left), Matthew and Mary DiCicco, parishioners of Our Lady of Ransom in Philadelphia, look over the Catholic Relief Services Operation Rice Bowl calendar in anticipation of Lent.

As the liturgical year brings us closer to the season of Lent, Catholic Christians worldwide will soon reflect on beautiful traditions in preparation for the observance of Christ’s Passion and the celebration of His Resurrection. These traditions may include simple Lenten meals, Scripture studies, abstaining from favorite foods and adding spiritual activities to their daily and weekly schedules, just to mention a few.

For those who grew up in and after the 1970s, the establishment of Operation Rice Bowl would add a beloved family, school and parish tradition to the list.

Operation Rice Bowl is a lenten program of Catholic Relief Services that started in 1975 as an ecumenical response to severe drought conditions in the African Sahel, the geographical zone of Africa stretching from the Atlantic Ocean to the Red Sea, and transitioning from the Sahara Desert in the north to the Sudanian Savannas in the south.

Operation Rice Bowl was first utilized in the Diocese of Allentown, and for the last 35 years has offered Catholics in the United States a way to connect with people in need around the world.

The traditional practices of prayer, fasting and almsgiving allow nearly 13,000 faith communities across the United States to show solidarity with the poor overseas.

Operation Rice Bowl is most commonly practiced at home with families placing a small, cardboard container shaped like a rice bowl in the dining room or kitchen. Once a week, the family shares a simple, meatless meal and places the money saved in the cardboard rice bowl, which will be donated to Catholic Relief Services at the end of Lent.

Anthony and Mary DiCicco, members of Our Lady of Ransom Parish in Philadelphia, were both raised in families that took part in Operation Rice Bowl, and they have participated annually during their eight years of marriage.

“We have a 5-year-old son Matthew who has become interested in helping with our donations to the parish food pantry, and are hoping that he will understand a little more about Operation Rice Bowl this year,” said Mary, who also emphasized the importance of knowing where their money goes and how it helps. “We have so much and it is nice to share with others who are less fortunate,” she added. The DiCicco family also takes part in a lenten program series that highlights different countries that benefit from Operation Rice Bowl.

In some communities, entire schools and parishes participate in Operation Rice Bowl, and the donations go to initiatives that help provide clean water, develop small businesses, provide agricultural expertise, assist with education and offer mother/child health programs, as well as HIV/AIDS treatment in more than 40 countries. Assistance initiatives are also implemented in the United States. Seventy-five percent of donations are sent to poverty stricken areas abroad, and 25 percent of donations remain in local communities in need.

Thomas Awiapo is the Global Solidarity Coordinator for Catholic Relief Services in Ghana, Africa. He relied on school feeding programs funded by Operation Rice Bowl as a child. Awiapo lost two younger brothers to malnutrition and was orphaned by the age of 10.

His search for food led him to a school where Catholic Relief Services was offering free school lunches provided by Operation Rice Bowl. Through food and proper education, he completed school and earned a master’s degree in public administration from California State University.

“Operation Rice Bowl is the gospel of love and hope for many like myself around the world,” Awiapo said. “Today, I am empowered with education to serve my community and country thanks to all who participate in it.”

Awaipo travels around the United States speaking at parishes and schools, and he will be speaking in the Archdiocese of Philadelphia during Lent, starting with a presentation at Sacred Heart Parish in Havertown during a lenten meal on Ash Wednesday.

Through the sacrifice and generosity of Catholic communities throughout the United States, Catholic Relief Services raises approximately $7 million annually from Operation Rice Bowl in order to fight global hunger worldwide.