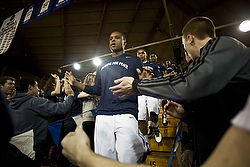 Members of the Villanova University men's basketball team enters the Pavilion in Villanova, Pa., prior to their Jan. 18 game against Seton Hall University. The teams wore "Playing for Peace" shirts as part of a partnership between Villanova and Catholic Relief Services to showcase the struggles of the people of the Republic of South Sudan as they work to build the new nation. (CNS photo/Villanova University)

The game also was a win for the people of the Republic of South Sudan, the world’s newest nation, thanks to a partnership between Villanova University and Catholic Relief Services.

Billed as “Playing for Peace,” the game gave student ambassadors an opportunity to showcase the struggles the people of South Sudan are experiencing as they work to build a nation from the rubble of a decades-long civil war.

Jennifer Joyce Kissko, an assistant professor in the university’s Center for Peace and Justice Education, said the event offered the chance to present an important concern to a wider audience that extended beyond the Villanova community.

“It means a lot to use athletics as a vehicle. We thought we could engage people’s attention for social justice,” she told Catholic News Service.

The event was more than a year in planning, Kissko said, adding that she hopes it will become an annual event that helps focus the campus on the important work of CRS somewhere in the world.

Players from both squads wore special T-shirts in pre-game warm-ups that read “Playing for Peace” on the front and “Stay with Sudan” across the back. Augustinian Father Peter M. Donohue, Villanova’s president, read a brief statement at halftime about the university’s efforts on behalf of South Sudan. Fans received a handout as they entered the arena offering background on the country and ideas on how to get involved.

Father Donohue introduced several of lost boys from Southern Sudan who were driven from their tribal villages and separated from their parents during the height of their country’s civil war; one was a recent Villanova graduate. Several South Sudanese diplomats made the trip to Philadelphia for the game and also were introduced to the crowd.

Bob Seitz, senior associate athletic director for external operations at Villanova, said the team was willing to take on a role in the campuswide campaign to bringing awareness of the situation in South Sudan.

“We were really happy to be part of that whole process, knowing that here at Villanova we do recognize our basketball program does drive a significant interest and exposure,” he said.

The ambassadors program has grown in recent years as students on college campuses seek to tie their learning experience with real world issues.

Joan Rosenhauer, executive vice president for U.S. operations at CRS, said activities vary from campus to campus with the goal of raising awareness about crucial concerns in the developing world.

“The kids get really creative about what they’re going to do to shed light on the challenges people are facing around the world and some of the policy issues related to that,” Rosenhauer said.

The college ambassadors program has reached 45 Catholic colleges and universities nationwide. Including both students and faculty, ambassadors undergo training to learn about the kinds of development issues on which CRS staff are working worldwide.

The ambassadors then return to their campuses to implement programs on topics such as global hunger; fair trade as a means of economic justice for small farmers and artisans; and HIV and the care of orphans and vulnerable children affected by the disease.