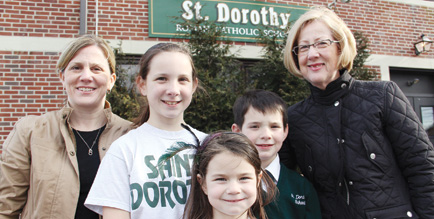 Lori Fosbenner, left, a 1987 graduate of St. Dorothy School in Drexel Hill, with her children, Hailie, a sixth grader at St. Dot’s, David, a fourth grader and Rachel, a first grader. Her mother, Gertrude Palladino, right, is a 1962 graduate of the school.

Legacy families add up at school

When Brian Gallagher and his wife Trisha (McCalla) Gallagher went to an open house last year at St. Dorothy School in Drexel Hill, it was like walking into a class reunion.

Like themselves, their grade school classmates from the 1980s are now parents of children who go to school in the same brick building they went to so many years ago.

St. Dorothy School draws families back to the school because of “the friendships, education and values,” said Brian Gallagher, adding that he hopes his children experience those same lifelong friendships and memories.

St. Dot’s forged a lifelong bond for Gallagher: It’s where he met his wife and is currently sending their first-grade son, Jack. The Gallaghers will be enrolling their daughter, Anna, when she is a kindergartener next year.

According to Eleanor Habicht, a school parent and St. Dorothy alum who serves on the school’s development committee, 64 enrolled school children have one or both parents who graduated from the school. At least three students out of the school’s total population of 427 have a grandparent who attended the school, which opened in 1949.

St. Dorothy “is like a family; it truly is,” Fosbenner said. “Everyone is supportive of one another. My mom spoke of it that way, it was like that when I went to school, and I have seen it grow and grow with my kids in school.”

Like the Gallaghers, Fosbenner and her mother still have friendships that began in grade school. She also attributes its tradition of family legacies to its reputation of building community and academic competiveness.

When asked what she liked about St. Dorothy, sixth-grader Hailie responded, “I love the teachers.” Her brother David, who is in fourth grade, said, “I have a lot of fun there.” Rachel is in first grade at St. Dorothy.

Pat Funchion, St. Dot’s athletic director, graduated from the school in 1979. His four children, ages 8 through 18, all have attended or are attending St. Dot’s.

“It’s pretty neat to watch my kids play in the same gym, wear the same uniform, and sit in the same classrooms that I did,” he said. Although the average class size now is about 22 students, it was about triple that size when Funchion was a student.

He said he appreciates the school’s ability to make a close community out of a geographically diverse area, where students feed into the school from several different neighborhoods in Springfield, Havertown and Drexel Hill.

He added that alumni often come back to visit the school and readily participate in school functions, such as Hoops for Hope, a weekend basketball tournament at the school that raises money for tuition assistance for families affected by cancer and for cancer research.

Reflecting back on his time spent as a St. Dorothy student and parent, Funchion said it has been “a great experience.”

“I’d do it all over again,” he said. “I would want to stay here and see my grandchildren go here, too.”

Louise Sheehan, principal of St. Dorothy, said in an e-mail that “it is heartwarming to see the dedication these families have for St. Dorothy School. That dedication is evident in the many ways in which the families support the school.”

Gallagher, Fosbenner and Funchion all attributed the success of the St. Dorothy community to the energy, welcoming nature and leadership of the parish’s pastor, Father Michael Murphy.

“He has taken a wonderful foundation and has made it even more wonderful,” Fosbenner said.

Regina Lordan is a freelance writer and a member of St. Andrew Parish in Newtown.