Cardinal Bevilacqua is laid to rest 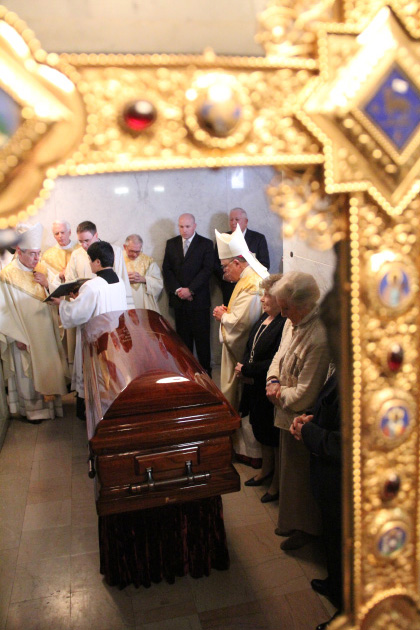 Framed by a processional cross, participants pray the rite before Cardinal Bevilacqua is entombed, Feb. 7, 2012.

Cardinal Anthony Bevilacqua was laid to rest in the crypt of the Cathedral Basilica of SS. Peter and Paul on Tuesday, Feb. 7, joining such illustrious predecessor Archbishops of Philadelphia as Archbishop Patrick J. Ryan, and Cardinals Dennis Dougherty and John Krol.

Archbishop Charles Chaput, who was principal celebrant of the Mass, in final remarks spoke eloquently of the late Cardinal, his predecessor once removed, and the challenges he faced.

“We’re each a mixture of success and failure, selfishness and self-giving,” he said. None of our title or public reputation, for good or ill, finally matters. The only thing that finally matters is to be a saint; a saint is someone willing to love and forgive others as zealously as God loves and forgives us. Love is the measure of every life, and before we weigh anyone else on that scale, we need first to weigh ourselves. God is the only accurate judge. He’s also the most merciful.

Cardinal Bevilacqua’s casket, covered by the pall, lay in state at the Cathedral Basilica of SS. Peter and Paul in Philadelphia Feb. 7, 2012.

“Cardinal Bevilacqua was an extraordinary man of the Church,” he said. “He loved his people, He loved Philadelphia. He carried the burden of leadership a very painful time for Catholics in this country. He gave everything he had to his ministry as a priest and bishop. So it’s right for us to be here today to remember the good that he accomplished and the thousands he touched through his personal kindness.”

The final ceremonies in the crypt were performed by Cardinal Bevilacqua’s immediate successor, Cardinal Justin Rigali, who had preached the previous evening at a Vesper Service, following a viewing for the late Cardinal at St. Charles Borromeo Seminary.

“For over 15 years Cardinal Bevilacqua was the chief shepherd of this local Church of Philadelphia,” he said. “With deep pastoral love he endeavored, to the best of his ability, to serve the people of God: to share their joys and their sorrows, their hopes and disappointments, and the many challenges of their families. He was part of the life of so many whom he loved and who loved him.”

More than 1,000 people filled the Cathedral, for this final remembrance of Cardinal Bevilacqua who served as Philadelphia’s Archbishop from 1988 until 2003. Among them were members of his large family, including his surviving brother, Frank, and sister, Madeline Lagan; Archbishop Carlo Maria Vigano, apostolic nuncio to the United States, also cardinals, archbishops and priests; those who had worked with him over the years; friends and ordinary Catholics.

Dr. John Haas, president of the National Catholic Bioethics Center, recalled it was Cardinal Bevilacqua who first brought him to Philadelphia as the first holder of the John Cardinal Krol Chair of Moral Theology at St. Charles Borromeo Seminary. “My children told me that when he called my house he would say it was Cardinal Bevilacqua and spell out his name saying B for buffalo, E for elephant and going though every letter of his name with some exotic animal. They remember eating pizza at his residence; he was a very kind-hearted man and we loved him.

Rita Schwartz, president of the Catholic Teachers Union, remembered, “We did some good things together. We had our differences, but it was never personal. We both worked for Catholic education and may have had different ways of going about it, but our hearts were in the right place.”

Not everyone was from Philadelphia; there those who came from Brooklyn who knew the Cardinal when he served there.

Theresa Correlate remembers when he was just ordained and serving at Sacred Heart-St. Stephen’s in Brooklyn. She and her friends were hoping for high school graduation, but needed some help.

“He said, ‘Terry if your mother will make me dinner on Friday nights I’ll come to your house and tutor you. I don’t want any money.’ He was a wonderful, wonderful caring priest.”

Helen Kelly who was there with her husband, Don, also remembers the Cardinal from those early years in Brooklyn, tracing back to when she was in grammar school. “He was sort of a spiritual counselor to me growing up, and we became good friends,” she said. “When I met Don he counseled us and he married us 50 years ago in July.”

Others, including Sisters of Mercy Ellen Cavanaugh and Marian Francis Kelly knew him from Philadelphia. Sister Ellen got to know him through working on the nine-year renewal leading up to the millennium. “He was a great priest and I can say no more, because that’s what he was,” Sister Ellen said.

Sister Marian Francis’ association was only in the last year of his life, when she worked on his correspondence. “He was a wonderful man,” she said.

Msgr. Louis D’Addezio preaches the homily at Cardinal Bevilaqua’s funeral Mass at the Cathedral Basilica of SS. Peter and Paul in Philadelphia, Feb. 7, 2012.

The honor of preaching the late Cardinal’s funeral homily was given to Msgr. Louis A. D’Addezio, who was associated with him from his arrival in Philadelphia until his death.

Msgr. D’Addezio, who was in charge of events surrounding then-Archbishop Bevilacqua’s installation in Philadelphia more than 22 years ago, told of the first event, a party for the Bevilacqua family the day the new Archbishop arrived. It was at the Philadelphia Museum of Art.

The family was assembled and waiting, he said. “In the grand court we watched the Ferko String Band descend those majestic stairs and head straight for the new archbishop. To the famous Mummer’s music, the captain put his fancy headpiece on the Archbishop’s head, the official picture was taken and the party began.”

Msgr. D’Addezio told of the many Thanksgiving Day visits to the sick on which he accompanied the Cardinal and recalled an early visit to St. John the Evangelist Parish. “We walked through the red light district on 13th Street to visit a parishioner who was dying from AIDS. That was a time when AIDS was rarely mentioned in public.”

The Cardinal, he said, made it a priority to visit sick priests, and he continued to do so in retirement “until about two years ago when he no longer could.”

He also spoke about the Cardinal’s love for children and at his orders the rejuvenation of the annual Christmas Party for children to make it a real party.

Some of his final remarks were addressed to the late Cardinal himself.