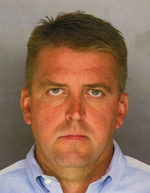 A former lacrosse coach at Lansdale Catholic High School was arrested July 17 in Montgomery County for allegedly sending false claims of sexual abuse by coaches at the school in anonymous emails to the Archdiocese of Philadelphia.

Timothy Udinski, who last coached boys’ lacrosse at Lansdale Catholic in the 2010-2011 season, was charged with harassment and stalking by the Montgomery County District Attorney’s Office.

The charges stem from a series of email messages allegedly sent by Udinski after he was fired from his coaching position in October 2011. He was fired, according to a statement by the DA’s office, “after he engaged in repeated heated arguments with players and staff. Principal (Timothy) Quinn reported that Udinski was extremely upset about his firing.”

The messages were sent anonymously to the Archdiocese from last October until late last May, claiming sexual solicitation or assault by coaches of the football and lacrosse teams at the school.

In a statement, the Archdiocese said the accusations were immediately reported to law enforcement. The Montgomery County DA’s office began an investigation that involved 12 county detectives and staff members who spent 184 hours, interviewed 97 people and executed 10 court orders and search warrants.

Following the probe detectives and prosecutors found the allegations against the coaches to be “false and unfounded,” the DA’s office said in its statement.

“The estimated cost to Montgomery County taxpayers to investigate these multiple false reports was over $8,250,” it said. “The cost to the men subjected to the false accusations is impossible to measure.”

After detectives confronted Udinski June 21, he admitted to sending seven anonymous email messages and that their complaints were untrue.

According to the DA’s statement, Udinski told detectives he made the false reports because he was “mad at the school for the way I was treated. I was just furious.”

“We want to thank District Attorney Risa Vetri Ferman and the detectives who spent countless hours working on these cases,” Casey said. “We are grateful for their diligence and concern for our students.”

Udinski was arraigned before Magisterial District Judge Harold Borak and released on $25,000 unsecured bail. A preliminary hearing on Udinski’s case is set for July 27.

NEXT: Friends reflect on Bishop-elect Nelson Perez before his ordination July 25