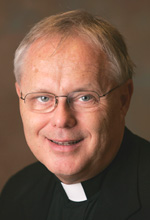 Once you are ordained a Catholic priest in the U.S., there are some things that you will never have to buy. They are not enough of a benefit to bring people into the seminary, but they are a side benefit nevertheless.

Most obvious, priests never have to buy a necktie. That is a distinct advantage over other men. When I was practicing law, I had dozens of neckties. I hated wearing them, especially on hot summer days in Washington, D.C. I never liked having to figure out which tie to wear. Red tie or blue tie?

The Roman collar is no more comfortable than a necktie. Since it is made of plastic, it’s like wearing a dog collar around your neck. But you at least you never have to worry about which collar to wear. And unlike ties, Roman collars never wind up in your soup at formal dinners.

Still in the clothing department, priests will never have to buy a white dress shirt or a blue suit or brown shoes. We imitate Albert Einstein, who wore the same thing every day. He always wore khaki pants and a blue shirt, except when he had to wear a tux. I always wear black. It is easier.

I don’t have to buy various colors of socks either. I buy only black or white socks. I have no need for anything else. Since I notice that young men are now wearing black socks at the gym, too, maybe I only really need black socks.

Priests never have to buy a tuxedo. All of my suits are black. A Roman collar is considered formal wear. So even though I go to a lot of weddings and other formal events, I never rent a tux. I also never buy an umbrella. People are always leaving umbrellas in church. I haven’t bought an umbrella in 25 years. Whenever it rains, I go to the church “lost-and-found” and pick one from the assortment.

Of course, you have to be content with those funny folding “lady” umbrellas that they fold up and put in their purses. They hardly cover your head, but they are better than nothing. Sometimes people leave a big golf umbrella in church. God bless them. I have a collection of great golf umbrellas. Only thing is, I don’t play golf.

Priests never have to buy their own rosary, Bible or a holy picture. People will give them to you by the boxcar. I probably have 20 rosaries. I give them away all the time. People often do not know what to buy the priest, so they buy a rosary or a crucifix or a Bible. I have a fair number of holy pictures, crucifixes and religious wall hangings.

There are some big things that I don’t have to buy, which really cost other people a lot of money. First and foremost are utilities. I pay for my own cable, but the parish pays for all my electricity, water, sewer, gas, and phone bills. That is huge. I think of that every day when I get up in the morning and turn on the coffee maker.

I get some other things free, like use of the parish copier machine, the Internet, and a free liturgical calendar every year. Those are small things, but very nice. Of course, the price of all this stuff is your life.

The pay in the priesthood isn’t much, but they say the retirement plan is out of this world.

PREVIOUS: Bearing quiet witness to the protection of life

NEXT: Labor Day: A time to reflect, not celebrate