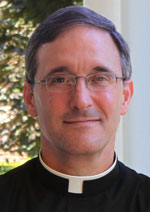 After the appointment of Father Charles Zlock to the position in July by Archbishop Charles J. Chaput, the priest hit the ground running in his first few weeks as rector.

Father Zlock said the position “feels like such a great opportunity. I can minister to a wide range of people, get their input on new programs and help anyone who wants to take time out to embrace the quiet here — to develop a personal spirituality and stronger connection to God in such a unique physical setting as Malvern.”

As rector, he gives guidance on spiritual reflection at daily, weekly and weekend retreats; organizes a national pool of retreat directors to lead men, women, teens and others in a variety of retreats; creates new programs; and offers sacramental ministry.

James A. Fitzsimmons, president of Malvern Retreat House, who has known Father Zlock for several years, said, “he brings great experience in a variety of ministries to our faith community. He will help us reach out in new ways to introduce more retreatants to our retreat ministry as well as help us re-evangelize the 20,000 retreatants who visit us annually.”

Born in Pottsville, Pa., Father Zlock grew up in Warminster and Doylestown, where his parents, Charles, a retired dentist, and Loretta (Walko), a real estate agent, still reside. His brother, Dr. Gregory Zlock, lives in Montana with his wife Margot.

He worked in Germany — in management training, manufacturing and cost accounting — before returning to the U.S. to work in corporate computer sales. By 1989, he entered St. Charles Borromeo Seminary and five years later was ordained a priest, earning a master’s in divinity and a master of arts in theology.

Over the past two decades he has served as a priest, pastor, teacher, school minister and administrator in the Archdiocese of Philadelphia. His assignments included Archbishop Wood High School in Warminster; Neumann-Goretti High School in South Philadelphia; St. Agatha/St. James Parish in Philadelphia; St. Augustine/Our Mother of Sorrows in Bridgeport; St. Ignatius of Antioch in Yardley; St. Martin of Tours in Northeast Philadelphia; and the Newman Center at the University of Pennsylvania.

Father Zlock was responsible for ongoing formation of priests in the Archdiocese of Philadelphia in which he organized retreats and planned continuing education and training, some of which took place at Malvern Retreat House.

He has spent his last three years in ministry as pastor of St. Lucy and St. Mary of the Assumption parishes in Philadelphia’s Manayunk section.

Father Zlock has an active lifestyle that includes a variety of interests and outdoor activities such as fly-fishing, backpacking, canoeing, camping, golf, reading and cooking.

Malvern Retreat House, owned and operated by Catholic lay leadership since 1912, is the largest Catholic retreat house in the country. It hosts 20,000 people annually at 250 retreats on 125 acres in beautiful Chester County. There are 50 traditional Men of Malvern groups and another 110 groups open to women, couples, teens, families, caregivers, people in recovery and many others.

Clergy and many religious denominations come to Malvern to reflect, refresh and rejoice in their faith.

To learn more about Malvern Retreat House and find an evening, weekday or weekend spiritual retreat that’s right for you, call 610-644-0400, email mail@malvernretreat.com, or visit online at MalvernRetreat.com