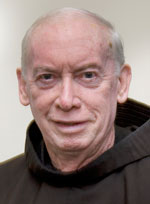 Born Dec. 12, 1935 in Philadelphia, he was the son of Thomas and Pauline (nee Walheim) Kelly. He attended St. Matthew School and Northeast Catholic High School, both in Philadelphia, then enrolled at St. Joseph Seminary in Callicoon, N.Y., where he studied from 1953 to 1955.

He was received into the Order of Friars Minor, Holy Name Province on July 14, 1955, at St. Raphael Friary in Lafayette, N.J., and professed his first vows there on July 15, 1956. He completed his philosophical studies at St. Francis College in Rye Beach, N.H., from 1956 to 1958, receiving a B.A. from St. Bonaventure University in Allegany, N.Y. He then went on to study theology at Holy Name College in Washington, D.C., from 1958 to 1962.

He professed his solemn vows as a Franciscan on Aug. 18, 1959, at Christ the King Seminary in Allegany, N.Y. He was ordained to the priesthood on March 17, 1962, by Archbishop Egidio Vagnozzi, the apostolic delegate to the United States, at Mount St. Sepulchre, the Franciscan Monastery in Washington, D.C.

Following ordination, Father Kelly was assigned to a pastoral theology program at St. Anthony Shrine in Boston, Mass., from 1962 to 1963. He was an instructor at Siena College in Loudonville, N.Y., from 1963 to 1964. From 1964 to 1970, he served as parochial vicar at He earned a master’s degree in theology in 1971 from Manhattan College in New York City, and in education from Iona College in New Rochelle, N.Y., in 1974.

He served in parochial ministry at parishes including St. Anne, Fair Lawn, N.J., of which he was a pastor;

Franciscan Father Joseph Nangle, provincial councilor of the order, will be principal celebrant and Franciscan Father Daniel Lanahan will preach the homily. Interment will follow at Mount Calvary Cemetery in Butler, N.J.

Father Kelly is survived by brothers Ted of Greer, S.C., and Gene of Nashua, N.H., and sisters Pauline Kelton and Dorry Lutz of Marlton, N.J., Carolyn Reardon of Greer, S.C., and Eileen Battagliese of Sewell, N.J. Condolences may be sent to Ted Kelly at 11 Hobcaw Drive, Greer, SC 29650.