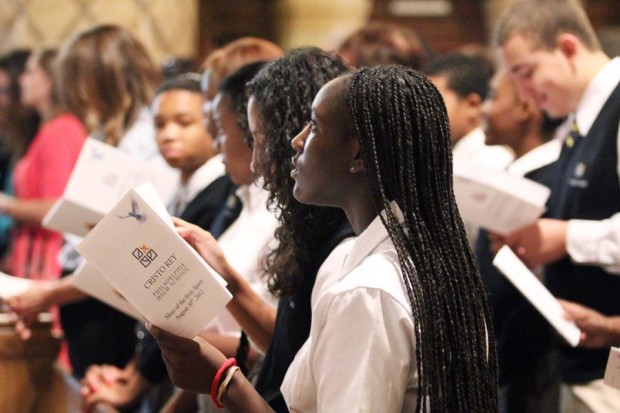 Philadelphia’s newest and most innovative Catholic high school, Cristo Rey (Christ the King) Philadelphia, received a formal baptism through an Aug. 31 Mass of the Holy Spirit celebrated  by Archbishop Chaput at Our Lady of Hope Church on North Broad Street.

What sets it apart from any other high school in the city is that it has a rigorous college preparatory program for a coeducational student body drawn exclusively from low-income families and mandatory work-study that covers a major portion of the estimated $12,000 school expenses.

The rest is made up by a modest family contribution and funds raised by the Cristo Rey board. Key to the entire concept is lining up mostly corporate sponsors willing to take on the students as five-day a month interns with the payment going to the school.

It’s a concept pioneered in Chicago in 1996, the brainchild of Jesuit Father John Foley, and has now spread to 25 cities with more on the way. Each school is entirely independent but follows the format devised by Father Foley.

Archbishop Chaput is no stranger to the concept. A Cristo Rey school opened in Denver, his former archdiocese, in 2003.

“I think the unique style of education provided by the Cristo Rey system provides an opportunity not only to the students but also for various businesses and people to participate in the education of those who are in need of a good education,” Archbishop Chaput said.

In Denver, he added, “it was very successful and it was one of the schools that had the clearest Catholic identities. I am happy to support and endorse it.”

As is the usual case with start-up high schools Cristo Rey Philadelphia opened with approximately 125 freshmen and will add a grade each year.

The makeup of the founding class reflects the demographics of poverty in the Philadelphia area. It is 57 percent African American, 23 percent Hispanic and the rest various ethnicities. More than half come from parochial schools, but only 37 percent are Catholic and 29 percent other Christians.

“The students bring their own faith life,” said Immaculate Heart of Mary Sister Regina Flanigan, an admissions counselor. “We show them the Catholic faith but teach them to respect the faith life they have followed and which they see in others. In this diverse world in which we live, it is God who loves each and every person. The Catholic faith is meant to show the love of Jesus and that is exactly what we do. These students pick that up; they understand it.”

Although he previously attended St. Helena School in the city’s Olney section, incoming freshman Phearath Dang, who hopes to eventually become a mechanical engineer, professes no religion but finds it an amazing experience to be among a group with so many different faiths but getting along. “We can learn so much, and the more you learn the better,” he said.

That connection was emphasized when Michael Gomez, principal of St. Joseph’s came on board as the first principal for the Cristo Rey. Other religious support came from the Sisters, Servants of the Immaculate Heart of Mary, and the Oblates of St. Francis de Sales as well as other congregations.

The Oblates came on board early in the process when the former Northeast Catholic High School where they taught was considered for a site. Although that fell through they remained involved.

“It’s a great day for the Oblates of St. Francis de Sales and the Sisters, Servants of the Immaculate Heart of Mary,” said Oblate Father Kevin Nadolski, a board member. “It is a way for us to continue our mission of great Catholic education here in the Archdiocese of Philadelphia.”

The academic curriculum at the school over four years includes four credits in English, mathematics, science and religious studies; three credits in social studies and Latin and two credits in health and fitness.

Curiously, there is no modern foreign language. That decision was made because it was felt students would be better served by the Latin, because “it will help them to speak better English,” McConnell said. “We are anxious for them to be able to speak English in the business world.”

As part of the overall effort, the board has already reached its goal of raising $5 million in startup and operating capital. It will continue fundraising, and has lined up sponsoring companies for the intern positions that are each shared by four students on consecutive days.

These are some of the top firms in the area including Independence Blue Cross, Henkels & McCoy, United Healthcare, the City of Philadelphia and Beneficial Bank, just to name a few.

Kiana Cruz, who attended Visitation B.V.M. elementary school, has been assigned to work at Comcast.

“It’s a wonderful opportunity,” he said. “Not many 14-year-olds get to work at a job as an intern, and I’m excited about it.” As for his future, he hopes to be a doctor.

Vitalismary Unachukwu, who is another graduate of St. Helena School, had much the same thought. “I think it will be great to experience the working life and when I get to college it won’t be a problem for me,” he said. His future plans are to eventually become a pharmacist.

The Cristo Rey didn’t happen overnight, and some of the key players are no longer in the Philadelphia area. Bishop Joseph McFadden oversaw Catholic education in the Philadelphia Archdiocese during the early planning stages. Now he is Bishop of Harrisburg, but came 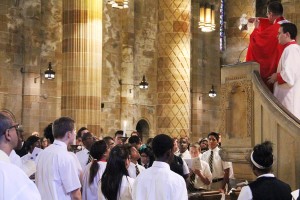 Students listen while Fr. Kevin Nodalski OSFS reads the gospel during mass for the opening of the new Cristo Rey School.

back for the opening Mass.

Probably no one was happier that day than Father Efren Esmilla, pastor of Our Lady of Hope. He was heartbroken three years ago when he had to close the parish school. Now, with the Cristo Rey in the school building, “There are bright stars shining on us here in the Logan section,” he said.

NEXT: Archbishop Chaput reflects on his first year in Philadelphia