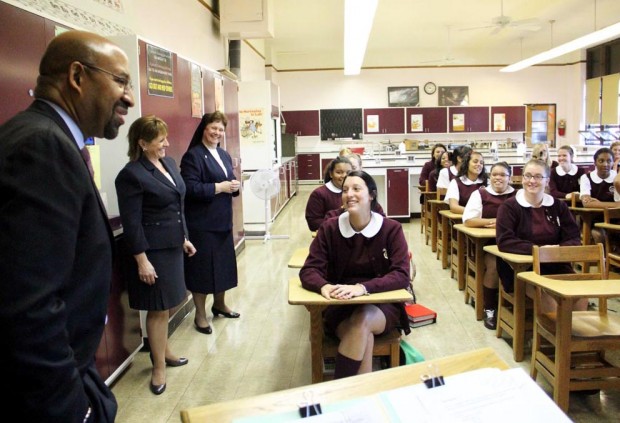 Philadelphia Mayor Michael Nutter makes it a practice to visit schools of all types at the opening of the school year – public, private, Catholic and charters. His Sept. 11 visit to Little Flower High School in the Hunting Park section of the city was probably not a random choice.

He admits when growing up while attending Transfiguration School and St. Joseph’s Preparatory School he had absolutely no knowledge of Little Flower. Just last year he discovered Immaculate Heart Sister Maureen James, his seventh grade teacher at Transfiguration, was at Little Flower helping in the library.

“Sister Maureen James really did have a significant impact on my life,” he told the assembled students. “You never know where leadership and guidance will come from.”

Back then in Transfiguration, he was seriously considering a military school for his high school years, but Sister Maureen James persuaded him to take the test for St. Joe’s Prep instead. He did, and won a scholarship.

“That decision as to where to go to high school led to my eventually becoming the 98th mayor of Philadelphia,” he said. ‘My best friends in life at the Prep are still my best friends,” he added, explaining those friendships and contacts ultimately led him to a political career.

Sister Maureen James said the reason she suggested St. Joseph’s Prep was because “my brother went there,” she said.

As to her former pupil, “He was very trustworthy, always knew what he wanted and dared to dream,” she said.

Advising the students of today, Mayor Nutter said, “Be independent. Think for yourself, do what you know in your heart and in your soul and in your mind is the right thing to do. Treat others as you would want to be treated. Look out for yourself, always respect yourself and never, ever let anyone disrespect you for the person that you know you are.”

Also attending and introduced to the assembly by Little Flower President Immaculate Heart Sister Donna Shallo were Carol Cary, Superintendent of Secondary Schools for the Archdiocese of Philadelphia and Edward Hanway, chairman of the Faith in the Future Foundation, which recently assumed oversight of the secondary schools and schools of special education.

Carey, who greeted the students as “your superintendent, your advocate and your sister in Christ,” assured them in the new school year, “your administration and teachers have planned and prepared 21st century educational opportunities which are sure to engage, excite and enlighten you.”

Hanway saluted the students, many of whom “will be part of our next generation of great leaders and great citizens.” From the Faith in the Future Foundation’s perspective, he promised, “this year is one that will be driven by our desire to help innovative programs within our schools and enhance our student’s learning experience.”

Judging by the enthusiastic response by the students to the mayor and other guests, one already abundant trait at Little Flower is loyalty. This was nowhere more evident when as a finale, students, faculty and guests all joined hands for a spirited rendition of the 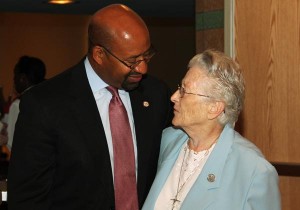 “Little Flower has always had great spirit and this comes from the love in our hearts for it,” said Senior Class President Ebony Ucogu. She travels in to Little Flower from Maternity B.V.M. Parish in Far Northeast Philadelphia, even though other Catholic high schools are closer.

“Little Flower has something special and when I visited I knew I needed to come here and that’s why I picked it,” she said.

NEXT: Gov. Corbett, Archbishop Chaput rally for education at Bonner/Prendie