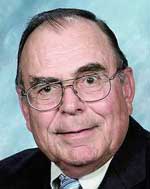 Born in Philadelphia, the son of the late William and Katharine (Blum) Kruckenberger, he was married to the former Kathleen Cooper for 54 years.

Originally from St. Bernard Parish in Philadelphia, he was a graduate of La Salle College High School and Drexel University, where he earned a Master of Science degree in engineering management.

A retired sales manager for Coil Company, Inc., an HVAC firm, he taught for a time at Mercy Vocational School.

After he and Kathleen settled in St. John Bosco Parish they became active members. He was president of the Home and School Association and the two taught CCD for 16 years and also taught RCIA.

“He was gentle, kind, loving and faith-filled,” Kathleen said.

He entered the diaconate program through St. John Bosco Parish and was ordained a deacon by Cardinal Anthony Bevilacqua on June 7, 1998 at the Cathedral Basilica of SS. Peter and Paul. He served at St. John Bosco until his retirement in 2009.

“Bill was always active in a quiet way,” said Msgr. Edward M. Deliman, who knew him from an assignment at St. John Bosco in the 1980s. “I would characterize him as a quiet man, and he was inspired to become a deacon through another deacon who is now deceased, Lennox Noonan.”

Bishop Daniel E. Thomas was the principal celebrant at Deacon Kruckenberger’s funeral Mass at St. John Bosco Aug. 31; Msgr. Deliman was the homilist. Deacon of the Word was Deacon Dominic A. Garritano and Deacon of the Eucharist was Deacon John J. Ellis, both of whom were members of his ordination class.

“One thing that was amazing, he was so humble,” Kathleen said. “He did not want anything big at his funeral and he didn’t want a eulogy. That was a laugh, there were so many people there. A lot of his classmates from La Salle came.”

In addition to his wife, Deacon Kruckenberger is survived by his son William A. and a granddaughter, Jolie Anne Kruckenberger. He was predeceased by his daughter Maryanne.