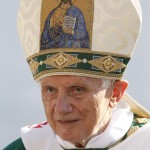 Pope Benedict XVI arrives to celebrate a Mass in St. Peter’s Square at the Vatican Oct. 11 to mark the 50th anniversary of the opening of the Second Vatican Council. The Mass also opened the Year of Faith. (CNS photo/Paul Haring)

VATICAN CITY (CNS) — Though they were written a half-century ago, the documents that came out of the Second Vatican Council are indispensable for helping today’s Christians navigate their way in a stormy world, Pope Benedict XVI said.

Unfortunately, the council’s 16 landmark documents have been buried under “a mass of publications, which, instead of making (the council’s texts) known, have often hidden them,” he said.

The council’s teachings need to be “liberated” from the deluge, he said, because today they can still be “a compass that guides the vessel of the church for sailing the open seas — in the middle of storms or calm and peaceful waves — to safely reach its destination,” the pope said Oct. 10 at his weekly general audience.

An estimated 20,000 people gathered in St. Peter’s Square for the audience on the eve of the 50th anniversary of the opening of the Second Vatican Council and the start of the Year of Faith.

Pope Benedict recalled attending Vatican II as a theologian, saying he was struck by the vitality and universality of the church that put itself under the guidance of the pope and the Holy Spirit, who was “the real engine” driving the council.

It was in the midst of the concrete expression of its universality that the church experienced the “great realization of her mission to bring the Gospel” to every corner of the earth, he said.

When Blessed John XXIII opened the council Oct. 11, 1962, he underlined the council fathers’ true task: to speak to a world that was rapidly changing about the faith in a “renewed” and more incisive manner, Pope Benedict said.

However, Pope John emphasized the church’s perennial truths were to remain intact “without any weakening or compromise,” he said.

The church was to open up to the modern world, “not to conform to it, but to present our world, which tends to turn away from God, with the necessity of the Gospel in all of its greatness and purity,” he said.

The world today is still showing signs of forgetting God or being blind to his presence, he said.

Therefore “we have to learn the simplest and key lesson of the council,” which is that Christianity “consists of faith in the triune God and in a personal and communal encounter with Christ who orients and gives meaning to life. Everything else flows from this,” the pope said.

The most important thing for the church today, he said, is to clearly recognize “that God is present, he is watching over us, he responds to us, and that when people forget God, they forget what is essential to their own human dignity.”

The anniversary of Vatican II’s opening is a call for all Christians to rediscover each day the beauty of the faith and God’s love, to intensify their relationship with Jesus, and to spread the saving Gospel message of love, he said.

During the audience, the pope also introduced the practice of having an Arab speaker at every general audience. Before and after the pope delivers his catechesis, members of the Vatican’s Secretariat of State read a short Bible passage and make announcements in a number of languages.

Because of the pope’s concern and love for Christians in the Middle East, and as a way to support peace in the region, the pope decided to include Arabic as one of the regular languages spoken at the audience, according to Jesuit Father Federico Lombardi, Vatican spokesman.

The pope spoke in Arabic, too, saying he “was praying for all Arab-speakers,” and he offered everyone God’s blessings.

PREVIOUS: The relevance of religious faith in the world of business

NEXT: Is there a path toward holy Communion for a remarried Catholic?