Lessons from a Pakistani teen fighting for her life 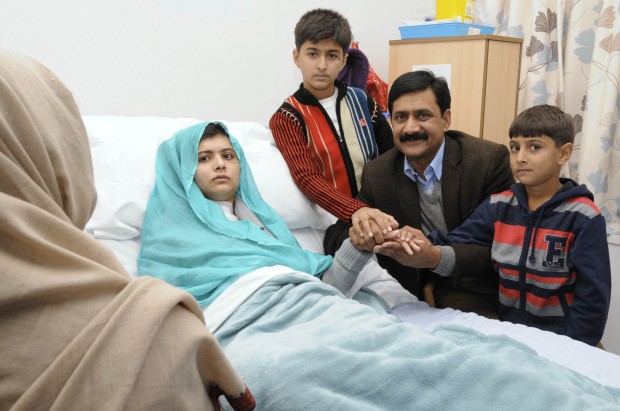 Malala Yousufzai is seen with her father, Ziauddin, and her two younger brothers, Khushal Khan and Atal Khan, as she recovers at the The Queen Elizabeth Hospital in Birmingham, England, Oct. 25. Malala was shot in the head by the Taliban for advocating girls' education; her father said his daughter was strong and would "rise again" to pursue her dreams after receiving treatment in the British hospital. (CNS photo/Queen Elizabeth Hospital handout via Reuters)

I have a new hero. Her name is Malala Yousafzai, and she’s a 14-year-old girl from Pakistan. When she was 11, the Taliban took power in her valley. They enforced a harsh set of laws on the residents, among them, an edict that girls could no longer attend school. They threatened girls’ teachers and burned down school buildings.

Malala, who dreamed of someday being a lawyer or a politician, wrote a blog for the BBC about her experiences in trying to get an education under the Taliban. She would do whatever it took to get to school: wear ordinary clothes, hide her books, change her daily routine. She went to school even when half her class stayed home. Her experiences made her stand up for other girls her age who wanted to go to school, too, even if it meant going against the Taliban.

“If I were caught going to school, they could kidnap me or throw acid on my face or kill me,” she told journalist Rohit Gandhi in a 2011 interview.

On Oct. 9, two men boarded a bus Malala and her classmates were riding and shot her. She is fighting for her life in the United Kingdom after being transported to a hospital there days after being shot in the head and spine.

Across the world, teens her age are often barred from going to school because of cultural, social, financial or geographic difficulties. While American teens moan and whine about the school year approaching, teens in Sudan, Ethiopia, Pakistan and Bangladesh see a proper education — with the bright future that often goes along with it — as a dream.

In Taliban-controlled Pakistan, Malala and her friends were risking their lives to learn how to read and write. They risked everything to go to math class and to learn about biology, music and religion, to do all of the things that make some American teens roll their eyes.

To teens in our country and nations like it, school can sometimes feel like a never-ending, annoying slog. It can be hard to deal with the homework, the difficult teachers and the long school days when you’d rather be hanging out with friends.

But Malala knows something that her peers in other parts of the world sometimes forget: That getting an education means more than just getting a piece of paper signifying that you successfully sat in a classroom for 13 years. Education opens doors that otherwise remain closed. Education means the end to ignorance and fear. It fosters the development of a society, an economy and a future.

Faced with our dumbed-down excuse for popular culture, I don’t see American teens remembering that often.

What would you do with your life if you were told you could no longer go to school?

I remember the many times I slept in class, crashed on the couch in front of the television instead of studying or put off my homework. Malala would be ashamed of me.

PREVIOUS: Self-restraint among values that keep society together

NEXT: In praise of affirmative action in schools, including Catholic U