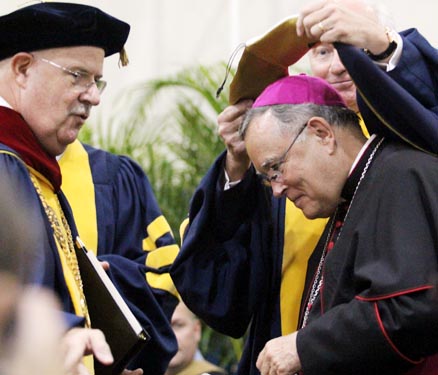 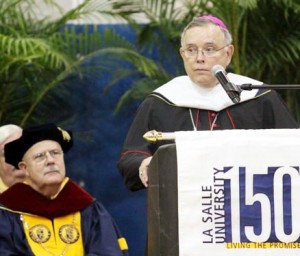 part of our 150th anniversary celebration because of the historical bond between La Salle and the archdiocese. Bishop Wood and the Lasallian Brothers of the Christian Schools collaborated to found La Salle College, bringing much-needed Catholic higher education to Philadelphia in 1863 in the midst of the Civil War. Now, as La Salle University, we continue to serve our region and beyond.”

James V. Morris, a member of La Salle University’s Board of Trustees who sponsored the archbishop for the honorary degree, said at the convocation, “Our Lasallian values and the values of Archbishop Chaput have so much in common, particularly the focus on the young and the poor. Our university seeks to recognize those who stand as role models not only for shared principles but also for actions that support those principles. Therefore, I believe it is both appropriate and a great pleasure to present Archbishop Charles Chaput to you for the degree Doctor of Humane Letters, Honoris Causa.”

NEXT: Five honorees inducted in to the Archdiocese Hall of Fame