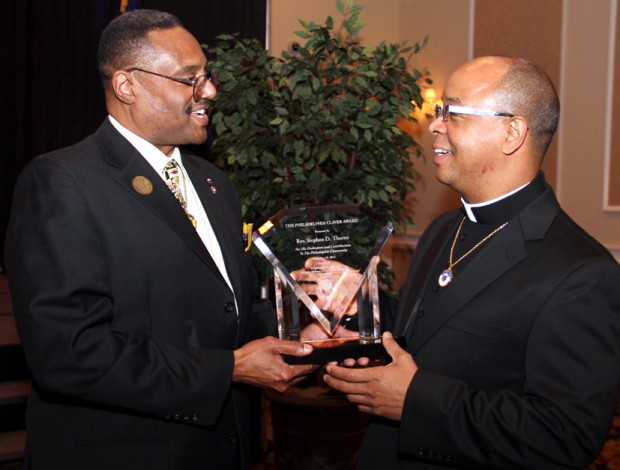 The theme was “It’s a Family Affair: Praising Loving and Living 2012” when  about 200 African American Catholics and their friends gathered joyfully for the Sixth Annual Philadelphia Peter Claver Award Banquet held Nov. 18th at the Drexelbrook in Drexel Hill.

“I’ve been a member of the knights since my seminary days,” Father Thorne said. “Like any Catholic the members try to live their faith, serve the Church, particularly in the African American community, and ultimately become a saint.”

As for his reception of the 2012 Peter Claver Award, Father Thorne said, “I’m humbled and surprised. It means I’ve got to work harder to be a better person.”

The Knights were founded in 1909 in Mobile, Alabama, and were introduced to Philadelphia at the former Most Precious Blood Parish in 1976.

Today there are 12 councils and courts (ladies auxiliary) in Philadelphia, Camden and Wilmington, which come under the Philadelphia Central Committee.

“I’ve been in the Knights since 1999, I’m a member of St. Athanasius Council,” said Leonard Brooks, the President of the Philadelphia Central Committee. He noted at a recent induction ceremony that Archbishop Charles Chaput and Auxiliary Bishop John McIntyre joined their ranks.

“It’s one of the noblest orders of lay Catholic people,” Brooks said, “and it’s growing.”

Chaplains Awards, which are given to youths, were presented to Carmen Harris, Tyler Martin, Zipporah Ridley, Alvin Chiverton and Badiyah Parker, who was the subject of a Phaith magazine profile that may be read here.