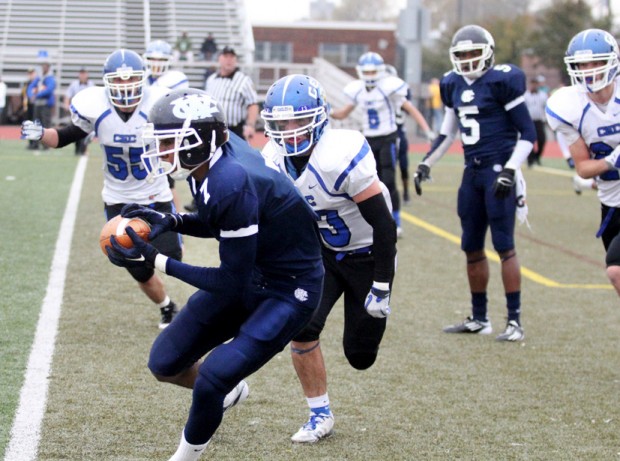 The word “classic” is not the same as simply being “exciting” or “entertaining.” It means that, in years to come, it is a spectacle that will stand the test of time.

And so, years from now, those who witnessed the Catholic League AAAA Division football championship Nov. 10 at Plymouth-Whitemarsh High School will have carte blanche to say they indeed saw a bona fide classic.

But with sports, there is one consistent bottom line – the end result on the scoreboard. In this case, La Salle High School defeated long-time rival St. Joseph’s Preparatory School, 28-27, in overtime, and snared its fifth consecutive league title.

“It was like there were two games out there,” said La Salle senior receiver Sean Coleman. “But that’s how it always is when these teams play each other. It always goes down to the wire.”

It was the first football championship decided in overtime in the long, illustrious history of the Catholic League.

In losing for the first time this fall, the Prep (9-1) will finish its season on Thanksgiving Day against Malvern Prep while La Salle (10-1) will take on Public League champion Frankford on Saturday, Nov. 17 for the District 12 title.

“People say things like, ‘It’s a shame someone had to lose this game,’ and that definitely applies to today,” said senior Ryan Winslow, the standout La Salle kicker and punter who is headed to the University of Pittsburgh next year. “I’m sure they’re feeling very awful over there, ‘cause I know we would be feeling that way after losing a game like this.”

Boredom, as in both teams tripping all over themselves for much of the first half before two late touchdown passes from senior quarterback Chris Kane (career-best 31 for 46 passing for 328 yards) to the aforementioned Coleman gave a suddenly dominant La Salle a 14-0 halftime lead that, to be blunt, seemed insurmountable because the Prep couldn’t dent the Explorers’ defense, having only collected two first downs at that point.

“We felt good going into the locker room,” said La Salle coach Drew Gordon. “We could have scored more points (La Salle missed two makeable field goals), but we were moving the ball.”

Anticipation sprouted when Prep junior Jawan McAllister blocked a Winslow punt at the La Salle 23-yard line early in the third quarter, waking up the Prep faithful who until then had nothing much to cheer about. Excitement ensued when the Hawks tallied twice in a short span on a one-yard run by junior quarterback Chris Martin and a 37-yard TD pass from Kane to sophomore phenom Olamide Zaccheaus  to tie the game at 14.

Resolve reared itself when the Explorers responded with an 11-play, 76-yard drive culminated by a 20-yard connection from Kane to Coleman on the first play of the fourth stanza, only to have the Hawks immediately answer with a 90-yard touchdown kick return by Zaccheaus.

“I wasn’t concerned because we were pretty much able to get yards at will,” said Coleman, who finished with a career-best 14 receptions for 138 yards and four touchdowns. “And when we couldn’t get first downs, our defense came through like they have all year long.”

Then came the nerves as both teams tried to avoid making a glaring mistake, like La Salle did when a fumble gave the Hawks great field position with two minutes remaining in regulation.

When a 40-yard field goal attempt was unsuccessful, overtime beckoned. Each team would begin at its opponent’s 10-yard line until there was a winner.

The Prep’s celebration of Zaccheaus’ 10-yard scamper on the first play of OT (his third TD of the game) was tempered by the disappointment of a botched execution of a critical extra point, giving the Prep a 27-21 lead.

Aided by a questionable pass interference call, La Salle enjoyed its own extra-session celebration when Kane found Coleman with a five-yard touchdown pass – their fourth scoring connection of the game.

Then came the game-winning extra point by Winslow.

In other Catholic League football action, Antwain McCollum was a perfect 9 for 9 for 205 yards and two touchdowns, and teammate Greg White added 146 yards and four touchdowns on 15 carries to lead West Catholic to a 48-14 victory over Conwell-Egan in the PIAA Division II District semifinal.

NEXT: Archbishop Wood to face one of nation’s top teams in state football championship