Priest says prayers, rosary got him across triathlon finish line 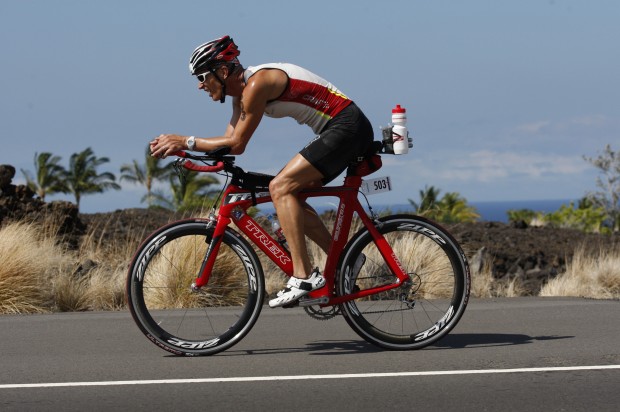 LOS ANGELES (CNS) — After California priest Father Thomas Baker finished a grueling triathlon in Hawaii, he acknowledged that parts of the 2.4-mile swim, 112-mile bike race and a 26.2-mile marathon were tough.

That’s when, he said later, he “used the rosary, my mantras and the faces of all those praying for me to help me move forward.”

The 53-year-old pastor of Sacred Heart Church in Lancaster conquered a windy course in Kona, Hawaii, during the Oct. 13 Ironman World Championship and crossed the finish line with a time of 13:33:36.

Fellow 82-year-old competitor, Sister Madonna Buder, a member of the Sisters for Christian Community from Spokane — and 20-year veteran of the Ironman World Championships — thinks Father Baker is the first Catholic priest to cross the finish line in Kona. Since Ironman officials do not track that type of data they were not able to confirm it.

Sister Buder qualified for Kona this year by completing in Ironman Canada in August, becoming the oldest woman to complete in an Ironman. The strong winds slowed her biking in Kona, however, and she was not able to make the bike cut-off time before the marathon segment of the competition began.

The priest, who wrote in the parish bulletin about his experience, said the course was “trying because of the heat, humidity and wind, all of which I expected but which made the time slower than usual.”

But, he added, “I wasn’t racing but enjoying the journey. Thank you for all your love, support and especially your prayers. … What a blessing!”

Father Baker was among 1,800 Ironman triathletes in the competition. He didn’t envision being an Ironman contestant when he started competing in triathlons when he was 26 and a seminarian at St. John’s Seminary in Camarillo. In high school, he played football, basketball and baseball. He started running, swimming and biking to exercise a knee he injured playing football with his fellow seminarians.

Although he successfully completed three short distance triathlons before being ordained in 1989, he didn’t compete in the sport again until 10 years later when he became a pastor at Our Lady of Guadalupe in East Los Angeles and decided to enter a longer distance Olympic triathlon.

In an interview with The Tidings, newspaper of the Los Angeles Archdiocese, before the Hawaii event, he said he found that training for triathlons was a good stress release from the demands of being a pastor. Before the Hawaii Ironman event, the priest had participated in 12 Ironman competitions around the country.

Previously, triathletes had to finish in the top three in their age groups in a major event in order to qualify for Hawaii or get chosen in a lottery for one of 200 slots that people sign up to win. Every year for a decade, Father Baker was one of thousands of hopefuls trying the Ironman lottery, only to be disappointed.

This year, Ironman officials changed the lottery, allocating 100 regular slots and 100 “legacy” category slots for those who have completed 12 Ironman triathlons and fulfilled other requirements. Father Baker’s record put him in the legacy special drawing, and his name was selected in mid-April.

He trained whenever he could, weekly swimming 5-7 miles, biking 150-250 miles and running 30-40 miles. He kept up this pace until the third week of September when he gradually tapered down approximately 25 percent each week, allowing his body to recover enough for the Ironman.

His qualification for the Hawaiian Ironman generated a lot of excitement in the parish, which sponsored a Hawaiian luau dinner triathlon fundraiser.

He said the Lancaster Knights of Columbus have been “big-time” supporters of his triathlon endeavors, giving him a Trek carbon fiber triathlon bike, helping him with transportation costs to events and providing jerseys for him imprinted with the Knights’ logo.

Parishioners also have been inspired by Father Baker’s example to start physical fitness programs of their own. Parish clergy and clerical staff have stepped up their exercise efforts and one parishioner has even signed up for an Ironman in Arizona later this year.

“To me, there’s so much connection between the body and the spirit — so many similarities about discipline and fortitude that I use in homilies and reflections,” the priest said.

“In recent sermons, I talked a lot about training and wanting to give up when you’re doing a long training day but just pushing through, and that’s discipline, that’s fortitude and you can use the analogy in the spiritual life, and it’s very helpful,” he told The Tidings.

“If you can do it in your physical life, then when things get difficult in your social life, your emotional life, your spiritual life, you will have the fortitude to be able to withstand it. That’s really what I’ve learned by this journey the most.”

Doyle is a staff writer at The Tidings, newspaper of the Los Angeles Archdiocese.

NEXT: Lansdale Catholic girls fight hard for soccer title, but lose to Ryan, by inches