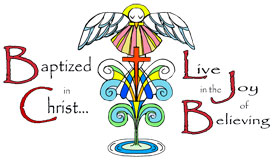 Catholic Life Congress is the Archdiocese of Philadelphia’s annual convention for the faith formation of lay people, religious and clergy. Held this year on Saturday, Nov. 17, it comes during the Year of Faith in the Catholic Church, a time for Catholics to “grow deeper into their faith and to be renewed in their faith,” said Connie Scharff, the archdiocesan point person for organizing the congress.

“As a result of that, by virtue of our baptism, once we have gone into our own faith we’re able to evangelize others simply by the way we live our daily lives.”

In a sense, she believes, Catholics are answering the question, how would Jesus have lived in this day and age?

The congress intends to help Catholics live their faith publicly as the Lord did, through the presentations held throughout the day at the Sheraton Philadelphia Downtown Hotel at 17th and Race streets.

The theme of Catholic Life Congress this year is “Baptized in Christ: Live in the Joy of Believing,” and it begins with 9 a.m. Mass at the Cathedral Basilica of SS. Peter and Paul.

Following Mass, Archbishop Gomez will lead all Spanish-speaking participants from the cathedral to the nearby hotel, where he will speak to them.

Meanwhile in the Cathedral after Mass, Catholic Life Congress keynote speaker Jonathan Reyes will address the remaining participants. Scharff said archdiocesan organizers were excited to invite Reyes as the keynoter.

Reyes is the founding president of the Augustine Institute in Colorado, a graduate program devoted to Catholic theological studies and leadership training. He currently serves as president of Catholic Charities and executive director of social ministry for the Archdiocese of Denver. In a few weeks he will begin his new position as head of the U.S. Conference of Catholic Bishops’ Department of Justice, Peace and Human Development.

In a first for the congress, participants may attend any session without preregistering for each. General registration is required, however. Those who wish to attend still have time. Scharff suggests they call her office at 215-587-0500 to reserve a spot, then pay the $60 registration fee, which includes a boxed lunch, at the door on the morning of Nov. 17.

The first of three sessions begins in the Sheraton hotel at 11:45 a.m. Each session features three to four speakers, including Archbishop Chaput and Archbishop Gomez  among the many noted scholars and speakers.

Full details on speakers, schedules, registration and other information is available on the Catholic Life Congress website.

Another first for the congress is also a Year of Faith initiative.

“One thing we’re doing a little bit different this year is the opportunity for folks to be videotaped … giving their testimony, telling their stories (of) how God brought them to love their faith, what is unique about their story,” Scharff said.

The approixmately one-minute videos will be posted on the archdiocesan Year of Faith website throughout the year as public witnesses of people’s Catholic faith, she explained.

Catholic Life Congress is an invaluable aid for Catholics trying to deepen their faith and become better equiped to evangelize others, Scharff believes.

The congress “gives us the opportunity to hear perspectives, to come out of whatever situation we are in and become more open to God’s word,” she said. “It reminds us that our faith is not just about our own piece of the world but that we’re all in it together. We are a people of community. The congress is a wonderful way for us to be reminded of all those things.”

PREVIOUS: Pa.’s Catholic bishops: Democracy depends on people fighting for what they believe

NEXT: Local collection for Sandy relief coming Sunday after Thanksgiving