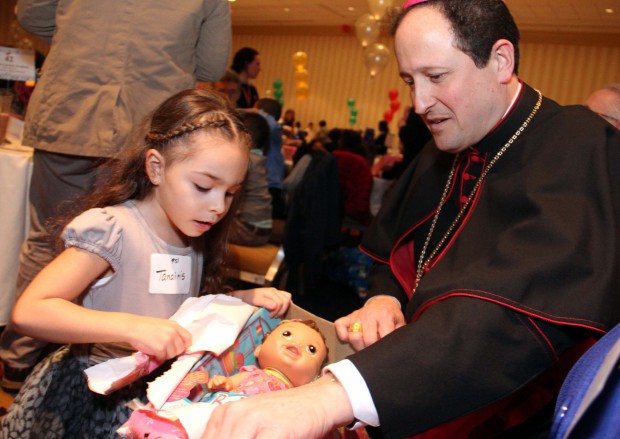 Bishop John McIntyre helps Tanairis from Casa Del Carmen unwrap a doll that she received as a present at the annual Archbishop's Christmas Benefit for Children Dec.18. (Photos by Sarah Webb) 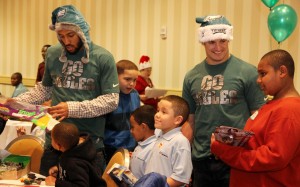 Douglas Dunn, who teaches theology at Pope John Paul II High School in Royersford when he’s not playing Santa Claus at the annual Archbishop’s Christmas Benefit for Children, got it right.

“I’m never ready for Christmas until I do this,” said Dunn, who has been donning the red suit for the past 17 years. “For me, it is just to see the joy and happiness of the children. I try to visit every child in the room.”

That’s a tall order, considering there were 400 children at the party representing the 16,000 children who benefit during the year from residential and community-based programs offered by archdiocesan Catholic Social Services.

(See a photo gallery with 21 photos from the party.)

In a way Dunn is a newcomer at the game. This was the party’s 56th year; it was originally instituted by Archbishop John F. O’Hara, who replicated a similar program of his former diocese, Buffalo.

For the past couple of decades the venue has been the Sheraton Philadelphia Center City Hotel, which donates its facilities for the annual event, held this year on Dec. 18.

Although the 400 children are the immediate recipients, the annual party is really a fundraiser to assist all of CSS’s programs throughout the five counties of the Archdiocese of Philadelphia.

“We know that it is really a benefit and it goes to services that Catholic Social Services provides,” said Jacki Delaney, who is in her fifth year as chair of the Benefit. “I have more enthusiasm now than ever before,” she said. “When you look at these children in their eyes you see promise and hope. The social workers give them that hope and make it work for them.”

Usually the event is hosted in person by the Archbishop of Philadelphia, but because of Archbishop Charles Chaput’s knee surgery, Bishop John McIntyre gladly filled in for him.

“This has been going on since 1956 and it is our way of fulfilling the mission of Christ to take care of those who are in need, especially at this time of year,” he said. “For some of these children this will be the only gift they receive this year. Each of them receives the gift he or she asked for.”

In addition to the 400 juvenile honorees there were an estimated 500 Catholic high school and elementary students along to make it happen, both as entertainers, musicians and Santa’s helpers.

One of the youngest groups was the cheerleaders drawn from grades one through four at St. Andrew Elementary School in Newtown, Bucks County.

“It was really fun because we got to see tons of children and make them happy,” said fourth-grader Sarah Mack.

Probably most people didn’t notice, but all of the Newtown kids had a gold cross and blue and white ribbon on their uniform.

“This is a commemoration, a little way for us to show our support for the children in Newtown, Connecticut,” explained Chuck Dolan, one of the dads.

Another regular at the party was Donald Hadfield, an expert stilt walker, who estimated he has been coming for 24 years. He’s a graduate of the Ringling Brothers Clown College and toured with that circus and also the former Royal Lichtenstein Quarter Ring Circus, a soft-sell evangelical troupe formerly conducted by Jesuit Father Nick Weber.

A highlight of the entertainment was the Nativity Play conducted this year by students from St. Lucy School for the Blind/Archbishop Ryan School for the Deaf.

Celebrity entertainers included the Phillie Phanatic and Swoop, the Philadelphia Eagles mascot who was accompanied by several players and cheerleaders, the latter somewhat more demurely clad than on game days.

All of this of course takes organization, and they were fortunate to have as this year’s MC Jack Kelly, a CBS3 traffic reporter who knows something about keeping things flowing.

The highlight, after the entrance of Santa Claus, was the distribution of the gifts by elves from Roman Catholic and Hallahan High Schools.

Mario got a Batman figure; Chrystal got a Bratz doll, Kiara got a Barbie Doll. Tiana got Little Pony, Hariah got Princess Celeste.

“Every year it seems to get more joyous and this year it seems even larger,” said Joseph Sweeney, secretary for Catholic Human Services. “We have a committee that is committed to making this the hallmark Christmas celebration in Philadelphia.” 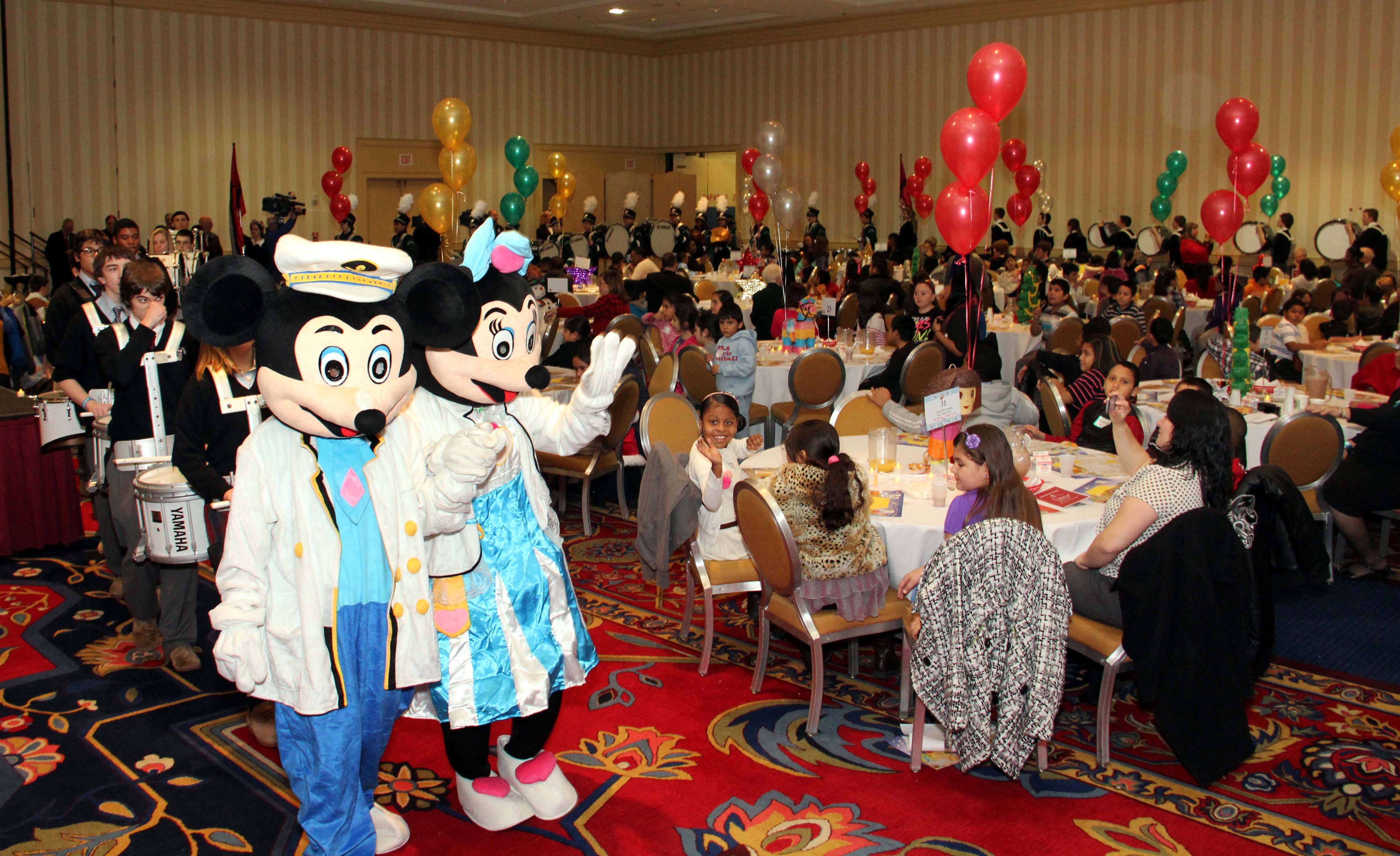 Mickey and Minnie Mouse lead the parade including a Catholic high school band at the party for more than 400 children.

NEXT: Parishes to join in moment of remembrance for victims of Sandy Hook tragedy